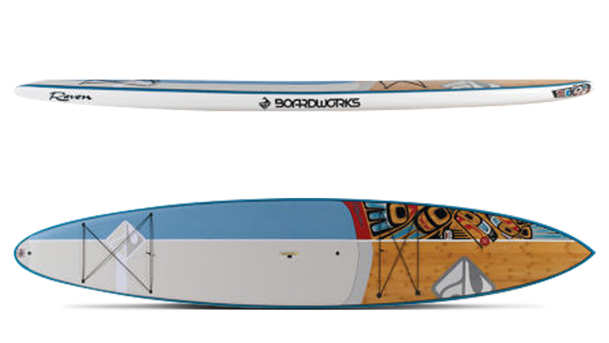 First of all, the Raven is a fantastic looking board, with eye-catching graphics. But it also handles exceptionally well, especially in choppy water thanks to its hull design. It's stable and tracks very well. The gear tie-downs in the front are awesome for connecting bungee cord or webbing to store your gear. The only downside is that it's fairly thick, so not the easiest to grasp (especially when wet) to put on top of your car/van after using it, though admittedly this is a small nitpick. Overall, if you're ok with the fairly steep price tag, I'd say you can't go wrong with this board.

by Future Beach Leisure Products
Details
This is a recreational sit-on-top kayak, plastic, weighing in around 40 pounds. It's a no-frills type of craft, but also quite affordable. For a small kayak, it tracks well, though nothing to write home about. It is quite maneuverable, though. There is deck rigging for your gear, and attachment points to add an after market seat back (which we did, and makes the seat much more comfortable). The only gripe I have is that if you paddle fast, the stern of the kayak will dip lower, and you'll take on some water in the craft. But if you're looking for a small, inexpensive, sit-on-top kayak for just lazy paddling, this one fits the bill.

by BOGA Paddleboards
Details
This is a fantastic all-around board. Lightweight, stylish (love the bamboo), stable, and tracks real well. Unfortunately I've never had a chance to use it for surfing, mainly flatwater paddling. It handles choppy water pretty well, though it's not the fastest board you could buy. Definitely a great board for beginners to learn on, and just as fun for more experienced SUPers. Pros Lightweight. Stylish. Stable. Tracks great. Cons The finish scratches easily, so you have to be very careful around rocks and tree stumps and the like. I'd recommend some rail tape to keep the sides from scratching if you plan on using it in lakes and rivers. Usage I use this board mostly for leisurely paddling and some touring. It's built for surfing as well, but we have no waves in central Ohio :-( 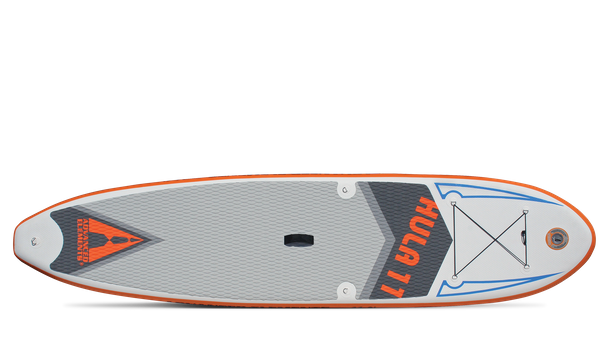 by Advanced Elements
Details
We own 2 SUPS, a regular one, and this Hula 11 inflatable one. Obviously there are pros and cons to each, but let's talk about the Hula... Overall, I'd say this is a good to very good inflatable. Not great, and definitely not top of the line, but a good value for the price (the really nice inflatables easily cost twice as much as this board). Once it's inflated, it's very stiff and very stable, great for beginners and more experienced paddlers. It has a 3-fin configuration and tracks OK, but definitely not as good as our non-inflatable (a Boga Classic). My biggest gripe is that on choppy water, the board flexes a little bit in the middle, reducing stability. I think that's due to the fact that it's only 4" thick. I've been on inflatables that are 5-6" thick, and they definitely retain their stiffness better in waves and chop. The pump that came with the board is pretty nice, compared to some other bargain brands I've seen. It has a pressure gauge. The process of installing the fins and inflating the board is fairly simple, too. I also love the gear tie-down rings; I strung bungee cord between them and use it to store my drybag, sandals, water bottle, etc. when paddling. It also has rings to attach an optional seat back and use the board like a kayak, but I haven't done that. I've also taken this down a few rivers, and it's nice not to worry about scratching up the paint if you hit a rock or tree stump. It's definitely not recommended for anything extreme, though; I wouldn't white water in it. But for lazy to moderate rivers, you can have fun on it. Pros -Great value for price. -Sturdy -Gear tie-downs -Packs down flat for easy transport Cons -At only 4" thick, can have too much flex in choppy water -Tracking isn't great, just OK Usage I've used this mainly on lakes/flatwater, though I've done some river cruising as well.