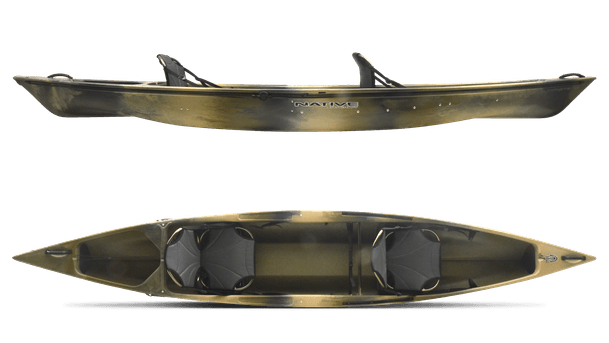 by Native Watercraft
Details
I recently picked up an ultimate 14.5 tandem kayak. It is a 2012 model. I looked at the new FX 15, which I really like, but I couldn't justify the extra cost at this time so I went with the older model. I wanted the tandem so that I can take my 9 year old with me.

I have been paddling for several years and previously owned an Old Town Vapor 12, Wilderness Systems Commander 120 and a Wilderness Systems Tarpon 160. I have also paddled a few other kayaks and have a lot of canoe experience. I think that the Ultimate fits my needs better than any other kayak.

I had the commander before moving to Florida and sold it to buy the tarpon. I wanted a longer boat that I could take out in the gulf. It's a great kayak as well and I would highly recommend it. The commander was good too, but wasn't as versatile for Florida. I am moving back to Missouri in a month and decided to go back to a hybrid style. As a photographer and fisherman, it's hard to beat this style in my opinion.

The ultimate 14.5 makes a great tandem with a child or small adult. The seats are amongst the best out there and it is easy to move from tandem to solo. The foam blocks you use for tandem mode aren't elegant, but they get the job done. The new model has a much better system. That being said, the new model is significantly heavier. As a car top kayaker, I wouldn't want the extra weight. I also like to kayak rivers and portaging the 14.5 isn't bad at all.

As far as the paddling goes, the ultimate paddles good for what it is. It's relatively fast and tracks straight while paddling. It has a small amount of glide but after a few feet it will drift off to the side. My commander that I owned previously tracked much better but was terrible to turn. The ultimate turns well for a wide kayak, so I prefer the ultimate now that I'm an experienced paddler. The ultimate also drifts in the wind a little bit, so a rudder would be beneficial in open bays or large lakes.

There are a lot of accessories, but some of them are discontinued for the older ultimates. I think they are overpriced, but I find most things to be overpriced so take that for what it's worth. The kayak seems tough and is a good compromise between weight and solid build. I would recommend this kayak for photography. You might try the commander as well to see which boat "fits." I plan to use mine for a lot of years to come. by Werner Paddles
Details
This is the best paddle I have ever used for my low angle paddling style.

I went with the bent shaft 230cm kalliste to use with a native ultimate 14.5. I wanted something with a more appropriate blade shape for my paddling style. I've been using an aquabound manta ray hybrid that I got for free with my kayak (purchased used.) The manta ray is ok for a cheaper paddle and much better than a dirt cheap entry level model. I decided to step it up to the next level and recently purchased the kalliste.

The first obvious difference is the weight. At 26 oz., it is one of the lightest paddles out there. I also tried bent shaft and straight and I am really liking the bent shaft so far. I would recommend trying both if you have the budget to do so. I also like the foam core blades. They are very light and seem to help my keep the paddle at the right depth for maximum efficiency. The exit is also super clean and precise. In the water the paddle is very quiet with very little splash. I believe this is due to the flatter back vs something like a Camano.

One thing that surprised me a little was how loud the blades are when they hit sticks or underwater logs. This is my first carbon fiber blade, so I'm guessing it comes with the territory. I don't beat on my equipment but the build seems tough enough for my use, which consists of kayak fishing and photography, so I'm often pushing off banks and logs.

My only regret is waiting so long to get a high end paddle. I would recommend making sure that you use a low angle paddling style and then demo this paddle alongside a few other models. I think that a paddle should be a "try before you buy" just like a kayak.

by Old Town Canoe and Kayak
Details
I have been paddling this model for several months now. While it is not perfect, I feel like it is a very nice rec boat for the price. To be honest, I wanted to get a Pungo 120 but didn't have the money to buy the boat plus all of the needed accessories. Found this one on craigslist for a nice price and have been pleased so far.

I think it is important to consider your needs when looking for your first kayak. The vapor has a very large cockpit and is fairly wide. This makes for great stability; I find the primary and secondary stability to both be excellent. It is also easy to get into due to the large cockpit. The downside is that water from the paddle will usually get you wet and in anything above class II you are going to get flooded without a skirt. You will also need a skirt during the colder months. I was willing to make this compromise since I paddle with a 4 year old and the large cockpit provides plent of space for the both of us. If it was just me I would probably go with something like a dirigo. I look at this as an all purpose kayak with the strengths leaning towards flat water and class II and below rivers. If you are looking for an all purpose boat that's strength is more in the river department I would recommend something like the liquid logic xp series.

Pros:
Great stability. Nice sized cockpit with easy entry. Tracking is very good. Day well in back is handy and the cover keeps stuff dry as long as you don't capsize. Price is reasonable for the quality. Foot pegs are easily adjustable and mine have never moved on me if I didn't want them too. Seat adjusts pretty easy.

Cons:
Turning takes some effort due to longer length. Seat not very comfortable (for me). I find myself wanting to get up for a bit after 2 or 3 hours. Not terrible but could be better. Doesn't track as nice as longer boats. Day well in back not really sealed good enough if the boat rolls. I keep my stuff in a dry bag.

by Carlisle
Details
I'll start out by saying that this is a nice paddle for the price. It is light weight compared to aluminum paddles and still feels sturdy. The blade design is curved which seems to help paddle faster on flat water, but I think a straight blade would be better in whitewater.

The paddle is a two piece and gives the option of rotating 45 degrees forward or back. This is somewhat limiting compared to higher in paddles that allow you to feather the blade at any angle you wish. There is also a little bit of play where the ends meet (paddle rotates a little bit when locked in) since the connection is not locked in super tight. This hasn't been an issue in real world use though.

All things considered, this is a nice paddle for the price. It is a great option for your average rec paddler and should last for years. There are better paddles out there with tighter tolerances and fancier designs but you will have to pay a considerable amount for it.