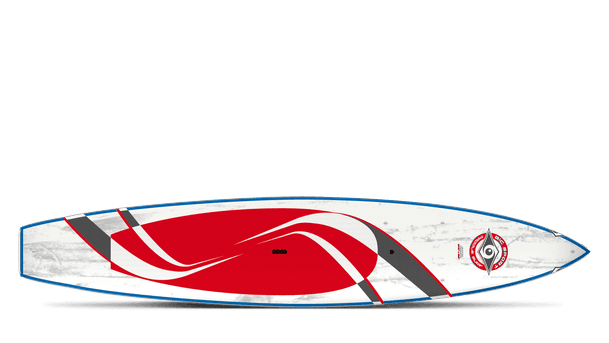 After 3 years with my 12'6" Ace Tec Wing, I got a 14' x 28" C-Tec Tracer a couple of weeks ago, and so far I am loving it. My board is new from BIC so it has the 2015 upgrades to improve stability, performance and sun resistance. Another great surprise is that the new 14' board now has the side carry handles that to date have only come on the 12'6" models--a welcome and unexpected bonus.

This board is not sold as a race board--the Tracer World Series boards are sold as racing boards. Rather, this is a touring board but it is noticeably lighter and faster than my Wing. It is not as stable as the wider Wing, but it's fine, even at my 240 pound body weight. The foam pad is far more comfortable on bare feet than the pad on the Wing. The Tracer has 4 bungee attachment points, in addition to front and rear attachment points, allowing things easily to be carried. The flat white painted areas have a cool whitewashed look that I like a lot, thought that will be a matter of personal taste. I'm sure it keeps a lot of heat from being absorbed by the board when left in the sun. The board has 2 vents--one front and one rear, and warning stickers advise that the vents be open on aircraft.

The only quality issue I have found early on is that the bright warning stickers that surround the vents are unbelievably crooked. A kindergartner could have done a better job with these. Plus, the warning stickers are made so that they don't peel off cleanly. Instead, the top layer comes off in pieces, leaving a very tenacious adhesive behind that is an enormous pain to remove. WD-40 did little to help dissolve it, so I resorted to 3M automotive adhesive remover, which was a big help. I was very worried it might damage the finish of the board, but it didn't hurt it.

At $2100 the board is not cheap, but I think it's very worth it. So much so that my beloved Wing is now on craigslist. 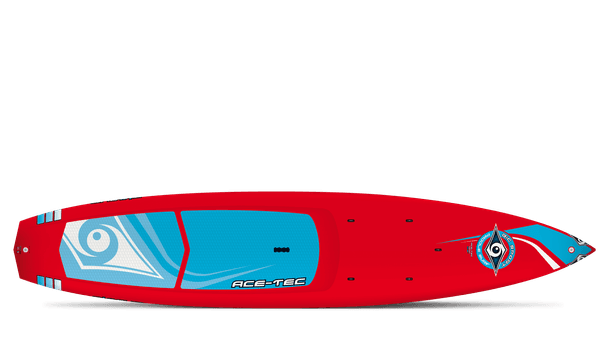 by BIC Sport
Details
This is my second season with my 12'6" Ace-Tec Wing, and I'm quite pleased with it. After kayaking for years, I started SUP last summer and have come to like it more and more as my skills got better. I paddle with others at times and I seem to have to work harder to maintain a decent speed than some friends with inflatable boards, which seem to glide along the top of the water. When the wind picks up my Wing stays on course lots better, and it also does well when the water goes from smooth to a bit of chop. I do weigh about 230 lbs. so perhaps this is to be expected when paddling next to someone weighing 100 (or more) pounds less. Pros The board seems very durable and I don't find it at all heavy, given its length. Primary stability is ok, but secondary stability is outstanding. Cons No complaints Usage I use the board for exercise and for flat water outings.

by Thule
Details
I have one season of use of my Hullavator rack system and I do recommend it. I bought it after tearing my rotator cuff made using my other rack difficult and painful. The rack does what it is advertised to do, and it is quite ingenious. I was very pleased to see that Thule offers an inexpensive adapter kit that allowed me to mount the Hullavator onto the new Thule AeroBlade bars I bought halfway through the season to replace the horribly loud Thule square section bars I had been using.

Mounting the Hullavator bases to the AeroBlades takes a bit of measuring and cutting of the rubber strips on the bars, but it is a one-time thing. Note that with the Hullavator you will mount metal base pieces onto your bars that are not easily removed. Certainly you will not remove them with each use--they are meant to be there semi-permanently. They have some protruding metal tabs on them which I think pretty much rules out using a car wash with your bars mounted, even if you "remove" the Hullavator cradles. Touchless car washes are the ticket.

Also, removing and mounting the cradles is not for the weak as you have to catch a rod in the heavy cradle piece onto a small tab protruding from the base that is mounted permanently on your bars, all the while holding the heavy cradle vertically, trying not to have it come down on you. You then have remove one hand from supporting the awkward cradle to pull the cradle away from the base just slightly to insert a retention pin into some holes, working against the return struts in the cradle mechanism and being careful to pull down the whole time. Lift it even a nudge and the heavy cradle assembly can unhook from the small tab and come crashing down on you and the side of your vehicle. It's not hard, but you do need some strength and you have to be careful. If you want to leave the cradles in place you don't have to worry about this after the first time mounting them, but they are VERY tall and on my SUV they prevent me from going into any garage when mounted. Plus, as expensive as these are, I prefer storing the cradles with their gas struts, linking and locking mechanisms indoors when not in use.

So I rate them an 8. They work and are unique, but they are expensive and in some ways finicky. There is nothing that in my mind is a good alternative if you need or want these, including the competitor product that has you hanging stuff off the side of your SUV for loading to "walk" your kayak up alternating front to back. That might work, but not as elegantly as the Hullavator.