So, you've learned and practiced all the basic strokes: the forward, the sweep, the stern rudder, the draws and the braces. But any paddler who's been out in the wind and the waves and all that other wet and wild stuff has at some point observed that when floating stationary in the water, most kayaks—with or without a paddler aboard—will tend to turn sideways to the wind, lying parallel to the waves. But while underway and paddling across the wind, most will tend to gradually turn upwind to point their bows nearly into the wind, or within 30-45 degrees. This tendency is a function of several physical forces acting on the boat, each of which we'll explore a bit, but the upshot is that this phenomenon can make it difficult to keep your boat on your intended course, and can be frustrating and physically exhausting for an unprepared paddler, especially if one doesn't fully understand its cause.

Sweep and stern rudder strokes may be employed, with varying degrees of success, but the tired paddler may soon find himself getting swung around like Grandpa's rooftop rooster, and struggling to make headway toward his destination.

There are multiple factors which contribute to weathercocking in sea kayaks, so let's look at each one, in their order of significance.

Every vessel, whether an oceangoing freighter or a little plastic kayak, creates a pressure wave footprint with a distinctive shape as it passes through the water. When viewed from above, bulbous zones of high pressure surround the ends of the boat (larger at the bow and smaller at the stern), while a narrow zone of low pressure suction pinches the midsection. The precise size and shape of this footprint will vary with speed and hull shape, but it is these pressure zones, moving along through the water with the kayak, which create the bow and stern wakes.

Normally, these pressure zones are symmetrically balanced on the left and right sides of the hull, so the kayak tends to track straight. But when paddling across the wind, the beam wind exerts a sideways, lateral force along the entire length of one side of the boat. Because the larger high-pressure zone surrounding the bow serves to resist this lateral force, and the smaller high-pressure zone around the stern offers less resistance, the overall effect is that the beam wind is able to push the stern further off course than the bow. The resulting force tends to push the stern downwind, and the bow upwind—the familiar weathercocking phenomenon. Because the entire pressure footprint is amplified by speed, and dissipates when the kayak glides to a stop, weathercocking tends to increase the faster you paddle. 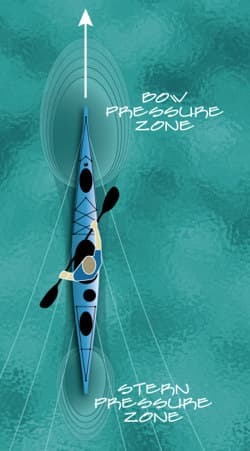 Beam winds are certainly the primary culprit, but water is able to exert great force on your kayak's hull, too. When waves driven by a beam wind strike the side of your moving kayak, they too encounter the unequal lateral resistance caused by the larger bow and smaller stern high-pressure zones, with similar results. So again, the stern will be swung downwind (or downwave) more than the bow, with the same result as above: weathercocking up into the wind and waves.

Grandpa's barntop weathervane unfailingly swings around to aim into the wind because the wind exerts more pressure behind the vane's pivot point than ahead of it.

So too does your kayak. Just like the weathervane, you and your kayak have a central pivot point—your combined center of gravity. If you've loaded the boat a bit bow-heavy, the wind can more easily push your stern downwind and pull your bow upwind. 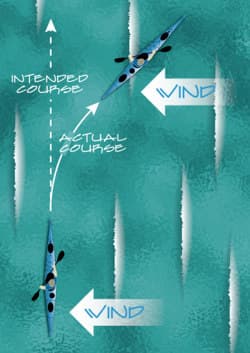 So, with all the forces of Neptune and Newtonian physics conspiring to carry us away, how is a paddler to remain in command of his vessel? Several techniques have been devised to help keep a kayak on a true heading in wind and waves, so let's look at a few, in order of effectiveness.

When a sea kayak is born on the drawing board, her designer knows early on whether a particular design will incorporate either a rudder or a skeg, and this choice helps determine several traits of the final boat design. Rudders are not interchangeable with skegs, so trust that your kayak utilizes whatever is best for that hull design.

Skegs
When native Arctic peoples developed the first kayaks, they soon realized that those boats whose stern sections boasted deeper, narrow fin-like keels seemed to track better, especially in beam winds. The modern sea-kayak skeg is a figurative and literal extension of this, but is adjustable in small increments for changing conditions.

In essence, by increasing lateral resistance in the stern, the kayak is better able to resist the yawing effect of the beam wind. This stern resistance is balanced with the resistance of the forward pressure zone, enabling the kayak to hold its course.

The degree to which the skeg is extended may be adjusted, depending on the direction and strength of the wind relative to the kayak's path: stronger beam winds will require the application of more skeg to maintain a crosswind course, while paddling in no wind will probably require no skeg at all. 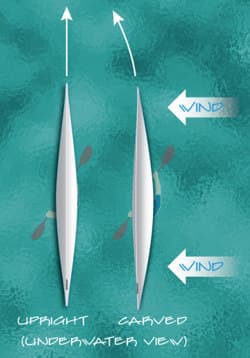 Borrowed from their larger nautical sisters (sailboats, ships, etc.), kayak rudders function in much the same way as skegs: by providing lateral resistance in the stern. Rudders differ from skegs, however, in several ways. Rather than being adjusted up and down, rudders are either fully deployed or completely retracted.

But the feature which perhaps most distinguishes the rudder from the skeg is that it is steerable. Generally controlled by sliding foot pedals, the rudder can be swung from left to right to serve as a trim tab of sorts, to provide lateral resistance in beam winds, similar to a skeg. When a beam wind threatens to weathercock you to the right, apply a bit of left rudder to counteract the wind and maintain a straight track.

This ability to steer is often misunderstood by novice paddlers to mean that the rudder is intended to steer the sea kayak, when in fact it is not. Always employ your sweeps, carves, and stern rudder strokes to make your little boat go where you want. Should your rudder ever fail, or you find yourself in an unfamiliar kayak, you'll want to know how to properly pilot your craft without a rudder.

When the wind presses on your right-hand beam and threatens to swing your bow to the right, shift your body's weight to rest on your right buttock and lean the kayak likewise. By altering the shape of your boat's waterline as it passes through the water, it will tend to pull to the left, ideally just enough to counteract the rightward weathercocking, allowing you to hold a crosswind course. If you feel uncomfortable leaning too far over, you may steady yourself by bracing on the oncoming waves.

An equally effective but perhaps less efficient technique is to use close, upright paddle strokes on the downwind side, and broader, low-angle sweep strokes on the upwind side, to combat the weathercocking effects of the beam wind. If you find this tiring or bothersome to maintain, shift the entire paddle in your hands upwind, holding it off-center with a longer reach toward the wind to effectively produce sweep strokes on that side.

In general, a kayak loaded with camping gear will handle better in wind and waves than an empty one, since it rides lower in the water to resist the effects of the wind, and by dint of its sheer mass. But it must be packed wisely, to attain a center of gravity near the physical center of the kayak. (For a bit of squirrelly fun sometime, try stuffing a couple of jugs of water into the extreme stern or bow of your sea kayak, and go out to play in the wind and waves. Your boat will tend to swing around this misplaced center of gravity, and you may be challenged to make her go where you want.)

If you know in advance that you'll be paddling in strong beam winds during the day, pack your kayak a bit stern-heavy to pull the center of gravity sternward and help resist weathercocking.

Gear carried on your decks can affect your vulnerability to weathercocking, too, by offering badly placed windage surface. During a recent trip, my partner, suffering from a bit of carpal-tunnel pain, and paddling a borrowed and poorly designed kayak with too little skeg, struggled with a strong beam wind during a five-mile crossing to another island. We rafted up mid-crossing and I lashed a drybag of gear far ahead on his foredeck. This additional surface area allowed the wind to counteract the bow pressure zone to keep the boat on track, and allowed my partner to more easily complete the crossing.

If there is any consolation to be found in this weathercocking phenomenon, it is that novice and intermediate paddlers often prefer to take large waves on the bow, rather than the beam or even the stern, since it is easier to see what's coming and to punch through them. If you happen to be headed that direction anyway, congratulations. If not, you may be in for a very long slog.

But now that you know the causes of weathercocking, and a few simple techniques for dealing with it, you can captain your little craft wherever you command.