Trolling from a Kayak

As a rule, I normally head out with just 2 rods. You've heard the expression about "Less Is More", but sometimes, "Less Is Less". Less overall gear to futz with. Less/fewer opportunities for you to doubt what lure/bait you have tied on. Less likelihood that you'll get multiple rods tangled up with one errant backcast. I've suffered all of these, so that's why I roll with just 2 rods. But, I'm starting to rethink that. I now feel that there is a valid reason for the 3rd rod, and that reason is so that you can quickly and effectively TROLL.

On an outing this weekend, I found myself being blown around a bit (thanks to the onset of tropical depression Isaac). So, I'd make a cast or ten, and then make my way back to where I originally started. As a result I covered a lot of water while NOT fishing - not good. I pondered trolling back to point A, but the lures I had tied on to my default rods really didn't have the weight to stay down as I regrouped. And, once I was back at my target area, the 2 lures I had were (in my estimation) perfect for the location. I was using a paddle-tail on a 1/8 oz. jighead (so it would sink slowly over grass beds), and a 1/8 oz. weedless jerk bait for getting in to the grass. I caught fish on both so I was hesitant to swap either one out.

But as the day wore on, it became apparent that the majority of hits came on the jig head, and fewer were hitting the weedless jerk bait. So I switched out the jerk bait for a ¾ oz. jighead, with that same paddle-tail, and started trolling as I covered water. That turned out to be a good choice. 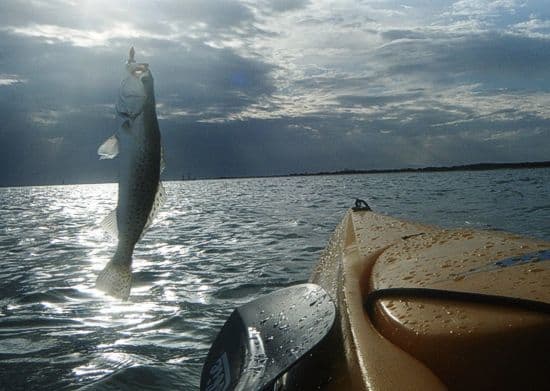 I got lucky even though I wasn't prepared to troll. If this scenario sounds familiar to you, take a few moments to get ready to maximize the time a lure is in the water. That old saying about "fish jumping in the boat" is just that, an old saying. The more time your offering is in the water, the better chances you have to catch something. My math skills stink, but even I can run the numbers on this one.

PREPARE YOUR BOAT:
Most fishing kayaks are called that because they have rod holders. The easy fix for the manufacturer is to install 2 flush mount rod holders behind the cockpit. That's great for holding rods for transport, but not always so great for trolling, simply because of the angle that they're installed at. For transport, the ideal situation is to have the rod holders angled so that they don't stick way out from the boat. This lessens the likelihood that rods will get tangled in branches when you're close to shore. However, for trolling, you DO want that rod angled out away from the boat, for several reasons.

If your kayak has the traditional flush mount angled rod holders, you can easily change the angle of the rod. Simply drill out the top of the mounting rivets, turn the rod holder out to the desired angle and secure. Rivets are certainly best, but stainless steel bolts and Ny-Lock nuts certainly work if you can get to the nuts. Self-tapping screws also perform fine, as long as you stop tightening once they get tight.

PREPARE YOUR RIG: In most situations, you need a lure that will either provide its own action and/or be heavy enough to stay in the strike zone while on the move. Each has its own risk and reward.

• The heavy jig:
Upside - If you're covering open water with few obstructions, this can be a good choice since it will try to sink depending on your speed. With a single hook, it's less likely to pick up weeds.
Downside - it will travel through the water without much twitch or jerk, and sometimes that movement alone is what triggers the strike - not so much without it. When you stop paddling, the lure sinks to the bottom, which could eventually cost you a jig.

• The lipped crank bait:
Upside - you can choose your trolling depth depending on lip size. The lure will have a natural swimming motion as you paddle. Most baits of this type come in floating models, which means that when you stop paddling, they float, staying out of trouble.
Downside - the trouble is trebles … 6 sharp points are great for hookup, but a nuisance when weeds are involved. If your lure gets fouled in transit, you'll need to stop and clean it before you proceed, and that is time spent NOT fishing.

SECURE YOUR RIG:
If you're lucky, a fish will pop your lure while you're headed to point B. You'll hear the drag (I set mine a tad loose, just so it will sound and I'll know it's party time), and hopefully you'll get to the rod before physics kick in and the fish steals it from you.

Solution: Put a leash on it!
I did a quick search, and came up with this, among others. I like the option of being able to easily undo the rod from the tether. 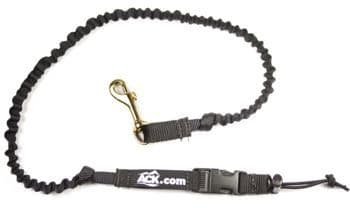 REAP THE BENEFITS:
So as I mentioned earlier, I did ditch the weedless jerkbait and put on a heavier jig head. I nabbed this little spotted sea trout while I was peddling back to the launch. Had I not changed out that lure (or been prepared to troll back), I simply would have missed an opportunity. As paddle anglers, we simply can't miss opportunities.

So, maybe it's time to ready that 3rd rod for trolling, and ready your kayak to troll. The only thing you've got to lose is a catching opportunity. 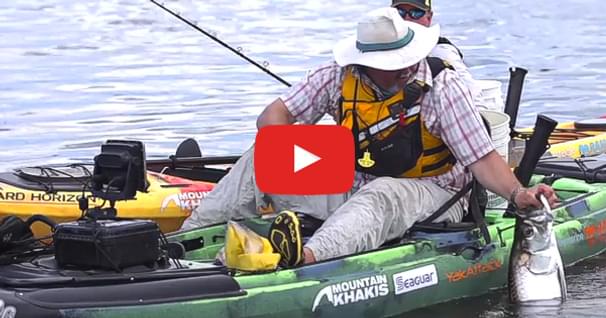