I didn't give it much thought at first when my paddling buddy began handing over his sleeping pad, rain jacket and canoe pack to his nephew. I just considered it a nice gesture; after all, we had finished our trip – 27 days paddling Quetico park – and his nephew was just beginning his – a summer spent working as a canoe guide for Scouts Northern Tier Camp. But when Andy handed over his canoe hat, a weathered Tilly complete with a sweat-stained rim and a dozen or so mosquitoes squashed on the cap, I definitely took notice. Giving away simple camp gear is one thing... but a canoe hat... that's like handing over your soul! 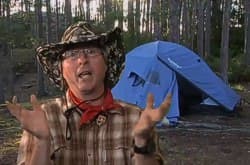 Wearing a hat on a canoe trip does much more then protect your bald spot from the ultra-violet rays or hide bad hair. A hat advertises your character out on a trip, it introduces your true self to passers by, announces to everyone that you’re an individual, a true adventurer. And Andy didn't just wear a baseball cap; no, it was a preshrunk, water repellent, full-brimmed Tilly. Not a fake Tilly, a true "tested through the intestine of an elephant" Tilly. My canoe partner is definitely not a fashion-designer canoe snob but he knows a good hat when he sees it.

Maybe I'm more of a hat fan then Andy, but I just couldn't help but question him all the way home about why he would hand over his canoe bonnet that covered his skull for 27 days in Quetico, not to mention countless other trips in the north. I'm guessing, however, that the taunting had some effect, because a week later he phoned up the camp to ask his nephew for the hat back.

That's when bad went to worst. The nephew had misplaced it after lending it to a young Scout who was suffering from heat stroke. No one seemed to know where it was left behind.

Andy was okay with the mishap. I wasn't. I contacted the head camp councilor demanding they investigate poor Andy's lost soul – I mean hat. Throughout the summer a massive search went on, unknown to Andy, and it wasn't until the last week of the season that the hat was located, stuffed into the back corner of a bush plane docked somewhere north of Red Lake, Ontario. It was immediately shipped to its rightful owner, with a long, drawn-out note of apology from a very sheepish nephew for being so callous.

So, what does Andy do? He decides to play a practical joke on the poor boy and replies to his nephew’s letter by stating, "Thanks... but it's not my hat!"

It took until the annual family gathering at Christmas for the joke to be let out of the bag, after Andy un-wrapped a brand-new Tilly from a gift-box handed over from his nephew.

Thankfully, family members have a tendency to forgive and forget. His nephew just recently made the decision to work in the north again this season, and being the good Uncle Andy he is, he mailed off some gear for him to borrow – including his new Tilly from Christmas, with his nephew's name inscribed inside.

We paddlers tend to reach for a boat, life jacket, and paddle as opposed to cranking up the A/C as a way… I'm getting older, which means winter camping just isn't as fun as it used to be. Problem is, I still…