Technical Makeup of a Kayak Paddle

The paddle is your propulsion, steering, and stabilizer. You'll have it in your hands nearly all the time you're in your boat. And in the course of even a brief trip, you'll move the paddle through countless strokes. Next to your kayak, a paddle is the most important and personal piece of gear you'll purchase.

Sea-touring paddles are available in a wide variety of materials in a number of combinations, which determine the paddle's strength, weight, durability, and cost. The heaviest and least-expensive paddles have metal shafts and plastic blades. Fiberglass or wood is common for midweight, midprice paddles; wooden paddles tend to be as light as or fighter than fiberglass, but not as durable. Paddles made from Kevlar, graphite, or carbon fiber are typically the lightest, but they also tend to be less durable and quite expensive.

The most expensive paddles-those that require particular attention during production and incorporate such space-age materials as graphite-are nearly always also the lightest in weight. These paddles can weigh under 2 pounds, while the heaviest tip the scales at more than 3 pounds. This weight range of little more than a pound may at first seem an inconsequential difference, and little justification for a price increase of as much as 100 percent, but after several thousand paddle strokes during a long trip, the ounces can begin to count very heavily. So don't scrimp: Money spent on a decent paddle will seem well worth it after a long day on the water. The lightest paddles are great for long-distance touring on flat water, but you may want something a little sturdier for more challenging conditions or skills practice.

There is no formula for selecting the correct length of paddle. Beyond a few basic considerations, it's a matter of personal preference. The most common length for a general touring paddle is between 7 and 8 feet (210 and 240 cm). The best paddle for you is one suited to your size and strength and the size and handling of your boat. Remember that beamier boats often require longer paddles, and narrow boats often require shorter paddles. Longer paddles put more leverage into each stroke but require more effort. Shorter paddles require less leverage and allow for a faster cadence and smoother acceleration. Most modem-day kayak racers use paddles of 220 cm or less with a high-cadence, vertical stroke technique-which also works well for recreational paddlers in more demanding conditions.

Wider blades (6 to 8 inches or more) supply greater resistance and are considered more powerful for acceleration than narrow blades, but the added width can cause more strain on wrist, arm, and shoulder tendons. So-called touring designs, such as traditional Aleut- and Greenland-style paddles, have long, narrow blades (typically less than 5 inches). These paddles tend to have slower acceleration and less overall power, but they are less fatiguing, especially on longer trips in loaded kayaks.

Asymmetric blades, common on many sea-kayak paddles, have less blade surface on the portion of the blade below the line of the shaft. As the blade enters and moves through the water at an angle, torque is reduced by exposing each half of the blade face to equal amounts of pressure. This balances the load along the centerline of the blade face, reducing the paddle's tendency to twist in the water and improving paddling efficiency.

Most modem, paddle blades are both dihedral and spooned slightly. The former reduces flutter (rapid side-to-side twisting motion) and sideways slippage by encouraging the water to flow off both halves of the blade face evenly; the latter provides more power by holding the water. Racers use an extreme design called a wing with a pronounced scoop to its blade; this provides a more positive "bite" on- the water during a forward stroke but can take some getting used to, especially with other strokes.

There is endless debate about the advantages and disadvantages of feathered and unfeathered paddles, and any paddler you ask will probably have a strong opinion. Feathered blades offer less resistance to a headwind, while unfeathered blades are best in a wind from the side. Unfeathered blades also require less wrist and forearm motion and are less likely to cause tendonitis. Each type works well under different circumstances and neither is best for all conditions. If you're a novice paddler, your best bet is not to enter the fray-try both by using a two-piece breakdown paddle that adjusts to either feathered or unfeathered position and stick with the one that feels best to you. 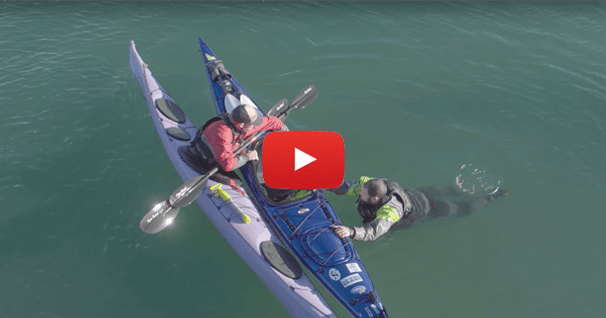