The sweep is likely the most common paddle stroke you'll use to turn your boat, whether you are initiating a change in direction or correcting your current one. Whereas propelling strokes follow a path very close to the boat with a vertical paddle, sweep strokes require you to move the blade out and away from the boat with a relatively flat paddle. As you reach further out to the side, you gain more leverage for your turn. Sweeps can be forward (using the power face) or reverse (using the non-power face); we will have a look at them independently.

Before getting into the techniques of turning, it's important to emphasize one key element of all turns (and you've heard it before!): torso rotation. Of course, torso rotation requires the separation of upper and lower body, so we'll proceed with the assumption that this is understood. One way to think of your upper body is as a steering wheel--you turn it to make the boat go in the direction you have chosen as aggressively as you want. Without rotating your torso, you forego all of the power available from it--like trying to fling a rubber band without first stretching it.

The forward sweep uses a combination of torso power and pulling on the power face to turn the boat. One of the most commonly used strokes, it's complemented by various techniques to achieve different kinds of turns, but for now we'll just look at the sweep itself.

Start the sweep by rotating your torso and head in the direction you want to turn. You should feel this stretch in your lower back, as your outside hip is pulled forward and your inside hip is pulled back. Now, on the side opposite to that which you are facing, place the blade completely in the water at the front of the boat, as if you were taking a forward stroke. The difference is that you will keep the top hand nice and low with the elbow bent. This hand should remain between chest and chin height to orient the paddle horizontally rather than vertically. Get comfortable with this set up position; remember, you are looking where you are going and not down at your active blade.

For a complete forward sweep, your blade will follow a wide arc that starts at the bow, extends out to the side, and pulls in at your stern. Throughout the stroke (or at least until near its end), your top arm is low and bent, while your bottom arm is straight. To maximize power, when you pull on the blade, try to pull your legs around with your stomach muscles at the same time. This will become more and more important as you progress into advanced techniques.

Once your sweep stroke has reached the three-quarters of the way mark, your tactics will change for what we call the recovery phase, or last part, of the sweep. Your goal is to avoid having your paddle get pinned against your kayak, or putting your shoulder in a position of risk. To do these things, you'll pull your back arm in towards your body at the end of the stroke and remove your paddle from the water.

To just change or correct the direction of the boat slightly instead of doing a complete turn, you can use a partial sweep. Do this by starting with your blade anywhere along the arc and finishing at the stern, but still rotate! (See "Stern Draw" for more information on correcting direction.)

The forward sweep in a modern whitewater kayak differs from the forward sweep you use in a sea kayak in that you'll keep your eyes on where you're going at all times. When sweeping to turn a sea kayak, you'll often watch your sweeping blade with your eyes instead. This promotes torso rotation and gives your stroke a bit more power over a longer period. Since whitewater kayaks are designed to turn efficiently, squeezing this extra power out of your sweep stroke isn't necessary, but even more importantly, when whitewater kayaking you'll always want to watch where you're going!

The reverse sweep is very similar to the forward sweep, except that it uses the back side of the blade and follows the opposite path. It is used frequently, especially when playboating. It can be a very powerful stroke, as the blade is often placed against the flow of the water to harness its force.

To set up for the back sweep, rotate your torso and look where you want to go. With your top arm bent and low again, place the blade completely in the water back at the stern. Remember, the safest and most powerful way to do this is by twisting at the hips, not leaning or reaching back. If you're set up correctly, your paddle shaft should be almost parallel to your boat, with both of your hands on the inside of the turn. The blade will follow a wide arc: starting at the stern, pushing out to the side and finishing at the bow. The lower arm is extended and the top arm remains bent throughout the turn. As you push on the blade, focus on using those stomach muscles to help pull the boat around. Again, you can use a partial back sweep to change direction slightly or correct your angle by rotating and placing the blade anywhere along the arc. 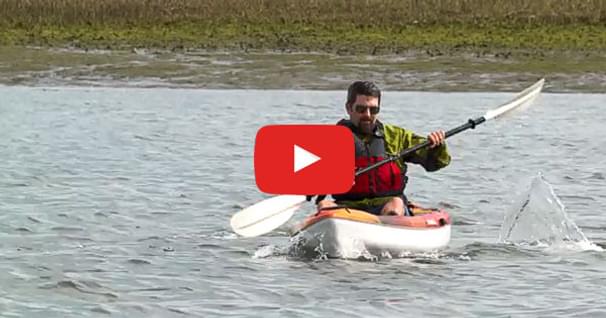 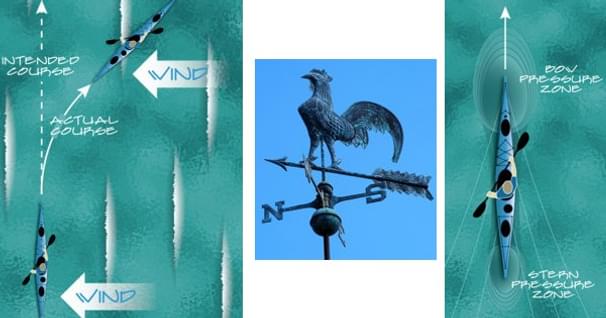