You've paddled out to the surf zone and now you're excited to catch your first wave. The good news about catching a wave on a paddleboard is much easier than catching one on a surfboard. There's 3 advantages you have: Number 1, you have a stable platform. Number 2, you have a paddle that will help you catch the waves faster. Number 3, you don't have to hop up on your feet; you're already on your feet.

The key to catching a wave is committing to it. As you see a wave approaching, make sure you're lined up perpendicular to the face, and then paddle aggressively when it gets close. If you've timed it right, after about 4 or 5 strokes, the wave should have reached you and started to pick up the tail of your board. Although you will be tempted to step back as you take off on a wave, do not do so. Stay in your position as you bring down the face of the wave, then you can move into a surf stance.

For small waves, you might need to keep paddling to hold your position on that wave. It also helps to keep your weight forward, as leaning back or moving back on the board will slow you down. When the time comes to exit off a wave, you don't just jump off your board and bail, there's several good ways to get off a wave and exit properly.

The first way to hit the brakes is to step back, or shuffle back toward the tail of your board while dragging your paddle on the water. The other option is to kneel down before sliding back and sitting on the tail of the board. Once the wave passes by, you're ready to turn and head back out, or continue into the shore.

A more stylish way of exiting a wave is to kick out of the wave. As the wave is starting to break, or before it breaks, exit off the wave by pushing back on the tail, kicking the board around, and heading it back out into the ocean. 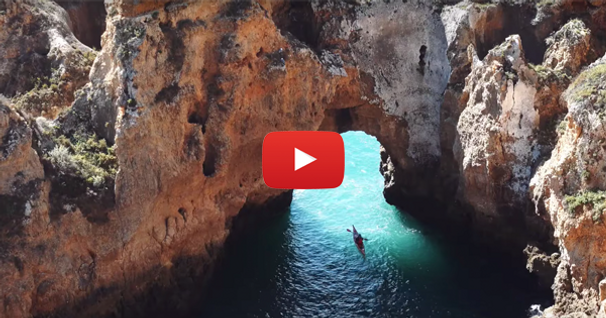 Check out these friends that paddled the gorgeous cliffs, outcroppings and caves off the coast of…