Reflections of a River Runner

"I never dreamed that any mere physical experience could be so stimulating."  - Katherine Hepburn's view on running rapids from John Huston's movie "The African Queen," (1951)

During the early years of canoeing I avoided river tripping like the plague. I'm not sure whether it was because I felt quite content paddling across calm water rather than being flushed through foam and froth like laundry in a rinse cycle. Or maybe I just had no interest in getting messed up with a group of over-enthusiastic river rats who just want to play in the rapids all day. But in my late-teens I decided to see what all the fuss was about and headed downstream for my first time. The moment the current took hold of my bow and began dragging me along with it, I was completely hooked.

River running is totally different from canoeing a chain of lakes. The river takes you on a journey, gently floating you on its back one minute and then thrashing like an unbridled horse the next.

Like many before me, my first battle with rapids was the biggest blooper of my time spent in a canoe. A friend had asked me to stand in for his regular bow partner for an annual canoe race on the local river. Neither of us knew enough about running wild rapids but we pushed off from the starting point just the same.

Throughout the race we managed to grind over several gravel bars, thrust our way through meter high haystacks, and bounced our way down boulder gardens and miniature chutes without flipping over once. We even traveled down the river backwards after our canoe hit a rock and spun us completely around. Thinking back, it was pure luck that we survived the whole ordeal, not to mention receive second prize.

Thankfully, I've learned from my past misadventures. Those days are gone when I blindly rounded each bend in the river and just hoped to keep the canoe straight and upright. It's now a ritual for me to scout every rapid before even thinking of attempting it. I constantly back paddle going towards any rapid, slowing my approach, watching for upstream Vs' which indicate submerged rocks and head for downward Vs' which indicate a clear path. I also keep in control by practicing effective strokes (draws, cross draws, prys, and ferry techniques) and by taking advantage of eddies so I can nestle in the calm of the storm before planning my next move. And when in doubt, I portage. And when I think I know what I'm doing, it's usually a sign that I don't, and immediately sign up for a refresher course.

Trust me, to get a full perspective on river running, to receive a three-dimensional view of any rapid, don't just believe in lady luck and sign up for some crazed canoe race. Head out with professionals who are humble about their skill. Only then will you truly understand the addictiveness each canoeist gets the moment your boat is at the brink of some run or being tossed around a thick wall of water, and suddenly realize there's no turning back - you are now at the mercy of the river of the river gods.

I think all canoeists go through that stage in life when ones' personal arrogance gets in the way of common sense. I've known so many paddlers that have blindly run down dangerous rapids without scouting them first, simply because they're just too darn impatient to get out and have a good look first. I once witnessed a canoe mate, while paddling down the Colounge River in Quebec, run a technical Class II dangerously close to a major waterfall. When I questioned his sanity, he simply laughed and said "Come on Kevin, I've never dumped on a Class II. What's your problem?" Not surprisingly, he dumped in mid-rapid and we luckily tossed him a throw bag before he plummeted to his death.

On another occasion in Quebec I even cancelled a guided trip on day one of a week long outing when the clients, who were completely stoned on cannabis at the time, refused to scout each and every rapid. They thought I was being far too safety conscious. I thought they were being idiots and refused to guide them any further. However, the best example of how a canoeist's lack of patience can become a severe risk factor deals with one of my own immature actions. I was guiding the members of my publishing company, Boston Mills Press, on our annual canoe trip, and for the first time we chose a river route. I was partnered up with Noel, the chief editor. As we approached the first difficult rapids en route, a technical Class II, I made the decision to run the set without scouting it first. I'm not sure if it was bravado, laziness, or just plain stupidity. I just know it was a big mistake.

It wasn't a dramatic flip. Noel and I just slid sideways down a smooth piece of rock, miraculously staying upright until the very end. There was a brief moment of panic when Noel's foot became wedged in a rock and held him under, but he eventually recovered and we began swimming downriver after our packs and canoe. Thankfully, the only item lost was Noel's favorite baseball cap.

The rest of the group, who all had safely walked around the rapid on the well-marked portage, arrived at the put-in just in time to witness us coming ashore, looking like a couple of drowned rats. It was a humbling experience, to say the least. The important thing, however, is that I learned from it. I openly admit I was totally wrong in not scouting that rapid first. Some paddlers take far too long to reach this stage. They make too many bad choices before developing a good judgment in safety, and at times, aren't lucky enough to live through them

How to properly scout a rapid:

Something to think about...

"I always think rating rapids is sort of a silly thing, because if you tip over in a one, that's a five to you." Robert Perkins, Talking to Angels 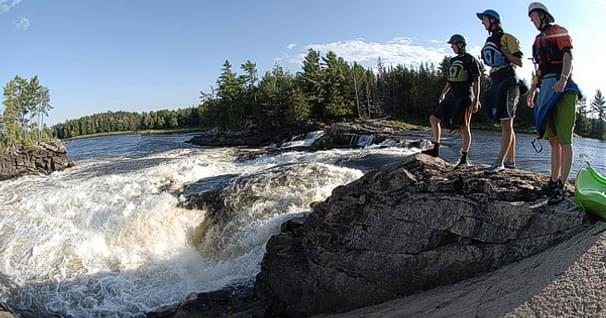 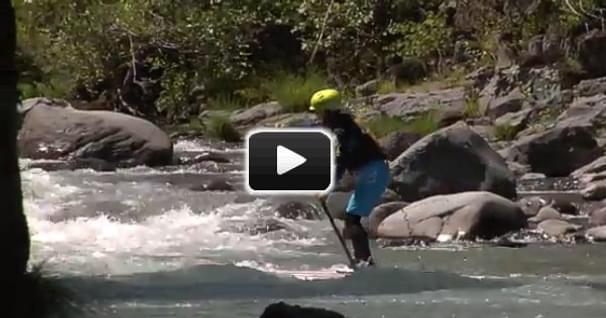