Traveling at the speed of life can make you dizzy. It can also make you forget to look around, and see what you're missing. Luckily, Mother Nature can sometimes drop subtle hints to remind you that you need stop and smell the roses, or in my case, the jacarandas. 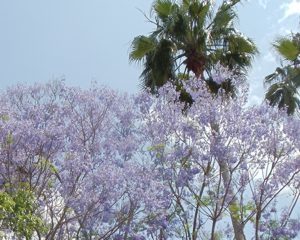 JACARANDAS: We all know that flora and fauna react to seasonal changes. They are both interconnected and the ability to survive and reproduce (for both of them) is often dependent on that connection. Since humans are "fauna" in the grand scheme of things, we too are influenced by the life cycles of plants. In the spring, Floridians are blessed by the blooms of the jacaranda tree. When environmental conditions are right, these trees explode with magnificent purple blooms.

When these trees bloom, they send a signal to Florida anglers. If the conditions are right for the jacarandas to bloom, conditions are also right for snook to be entering their "feed and breed" season. The bite is ON. These trees are plentiful, so the signals can easily be seen, but not if you don't take the time to look away from the grindstone. 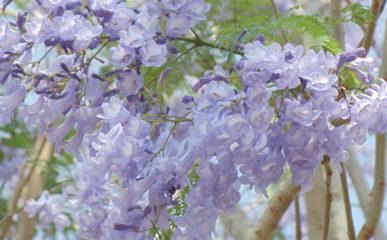 THE CALL OF THE JACARANDA: A buddy of mine is a teacher, and wanted to return to Florida during spring break. He asked how the fishing was, and all I had to do was mention that the jacarandas were blooming. He was on his way. Once he got here, he fished a good bit (while I had to work), so we only got to take the kayaks out once. That happened on a Saturday, and it turned in to a family affair. Friday night we got a truck load of kayaks prepared, and equipped ourselves for the next day. As usual I always pack too much gear. But hey, I was taking four kayaks and that calls for a lot of stuff.

My buddy and I got up early on Saturday morning, threw the rods into the truck and made our way to Fort DeSoto. The rest of the family would join us later. So many boats, so little time … 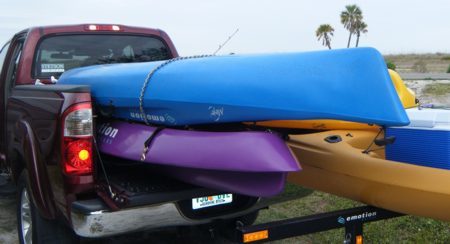 It didn't take us long to get on the water. I didn't bother to check the tides because sometimes you simply go when you can, and construct a game plan once you get there. My buddy had a simple plan - the more time your bait/lure stays in the water, the better your chances are for catching something. 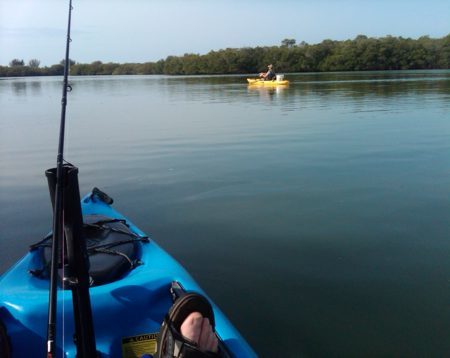 We paddled a lot that day. We got to see some decent fish being caught, and even got to see several manatees. But, catching fish evidently wasn't in the cards for this day. We caught nothing.

THREE GENERATIONS OF PADDLERS: Sometimes fishing ends up taking a backseat. Such would be the case today. The family caught up with us a little later in the day, greeting us with smiles and food - really GOOD food. But this would end up being a day of "firsts". My wife recently got a new kayak - that's good. But on the day I brought it home, her shoulder was in a sling - that's bad. Paddling wasn't going to be happening for her at that time. Since her shoulder is better, this would be the day that the new boat got christened. My granddaughter was now old enough to be open to (not afraid of) the kayaking experience. This day, she wanted to give it a shot. As a result, this picture means a lot to me. Three generations, in kayaks, loving the outdoors. 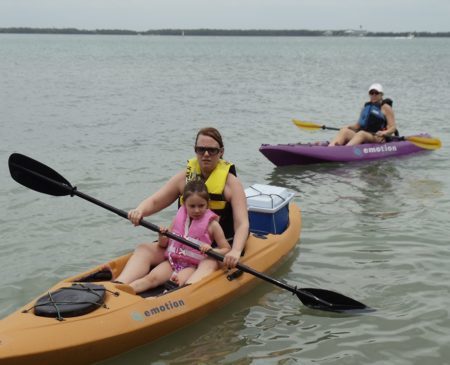 THE CLEAN-UP: 4 kayaks, 4 paddles, 4 pfds, 4 seats, 5 rods, tackle, cast net, beach toys, beach chairs, coolers, etc. Once exposed to salt water they all need to be rinsed. Such is the price for living this close to paradise. As I loaded it, I didn't think much about this task. Once I unloaded it, well… 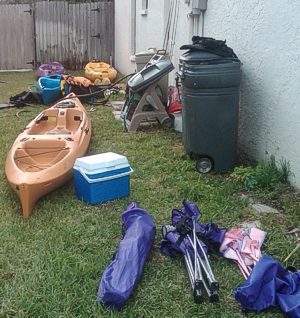 After a long day of paddling, this was quite a chore. But, it was well worth it, and I look forward to doing it all over again. The jacaranda bloom brought me more than a tug on the line - it gave me a memory that will last a lifetime.

MAGNOLIAS: It doesn't take much data for me to draw a parallel between fishing and music. Then again, sometimes the music just stands on its own.

I graduated high school in the mid 70's. Classic rock was being chiseled during those days. It wasn't classic rock, it was merely what was on the radio. Southern rock wasn't southern rock. It was rock that originated from the south. I rode my bike to the store, bought Lynyrd Skynyrd's "Second Helping" and played it until the grooves were worn smooth. I was the coolest kid on the block because I could play "Sweet Home Alabama" on my guitar. Played it for decades in the bars - grew to hate it, but never got tired of the immediate crowd response when I played that intro riff. A lot of years have passed since then. In those years southern rock got labeled, shelved, and in a lot of ways died on the vine. Well, a few weeks ago I heard a band that brought it all back. My wife and I went to an open air concert and were blown away by one of the lesser known opening acts - Blackberry Smoke.

My expectations were low, since I had no idea who these guys were. I *did* notice that their guitar tech was tuning up some gorgeous Gibson guitars, so at the very least there were would be some great tone, even if the content was unknown. Every song we heard was better than the previous one. Since everything must be labeled, call it "southern rock", and "country", hints of "bluegrass", and it damn sure had the rock and roll element in your face. But don't believe me - check out out for yourself. Enter the "Magnolia" segway …

If you take away nothing else from our time together today, let it be this: Life is short, and the only thing you're left with as time moves on is memories. Too often time steals those too, so get out there and make a bunch of them. There is always safety in numbers …

Hold on! It's August already?? Where did the summer go? If you've been as busy as we've been, many…