The holidays are upon us. But then again, thanks to the retail stores, Christmas has been on our minds since August. But, they're really on us now. Now is when you look at the calendar and see how many "open" weekends are left in 2010. If you're like me, the weekends are about the only time you can work in a fishing trip, so some planning is in order. Obviously, Thanksgiving is this week. Many of you will be traveling to spend time with family friends, and travel will most likely consume this weekend. Good for you - you made the right decision. But, while I was out on the water this weekend, I started doing some math, and that's when I realized that this will most likely be my last scheduled fishing event for the year. Let's review the remaining weekends left in 2010:

Nov 27-28 Post-Thanksgiving travel.
Dec 04-05 Put up Christmas decorations.
Dec 10-11 Shopping. You can't avoid it, so wear comfy shoes and just suck it up.
*Dec 17-18 Somebody will be having a "holiday" party (It's really a CHRISTMAS party, but you can't say that anymore).
Dec 25-26 This is Christmas, and fishing should be one of the last things on your mind.
Jan 01-02 I'm watching football, and won't be leaving the house unless it's to go to someone else's house and watch football.
Jan 08-09 The Christmas decorations come down, and make their way back up to the attic.

*Editorial rant: Why is it that this time of year some people say "happy holidays", but put up Christmas decorations, and give Christmas gifts? Easter and Good Friday are religious holidays too (is it really a paid holiday because of a bunny?), but I never hear anyone politically avoid that one. One of my favorite shows is NCIS. If you watch it, you'll often see Gibbs smack Tony Dinozo in the back of the head when he says something profoundly stupid. Let's call that act giving someone a "Dinozo". When someone tells you "happy holidays", give them a "Dinozo" and say "… and Merry Christmas to you". But be careful, repeatedly giving someone a "Dinozo" may lead to them suffering a concussion, you'll be fined and it may even lead to temporary suspension. Whoops, sorry, digressed to another sport. Bottom line: Football is football, and Christmas is CHRISTMAS. In our hearts we know how both are to be played.

Anyway, since this might be my last outing for a while, I decided to really go for it. As luck would have it, my wife's company was heading up another group kayaking trip so not only would I get to fish, I get to be around a bunch of good folks that merely wanted some time on the water. The outfitter supplied tandems and single SOT's for the event for those that didn't have their own boats, the rest of us brought our own. The result: 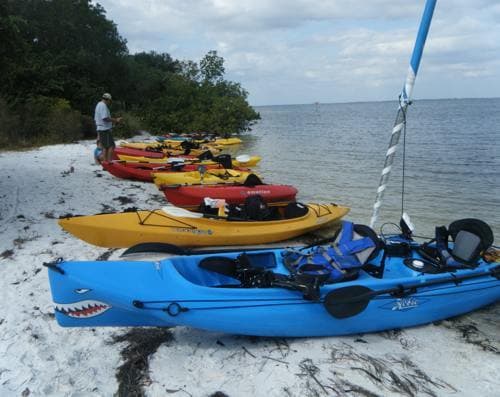 In the distance, you may be able to pick out my boat, the yellow one with 5 rods. Why 5, you may ask? Well, I only had 5 rod holders. As I gathered my gear the night before I pondered what would be the 5 lures I'd most likely use given the area and conditions. Then I decided why not just tie them on to their own rod. Besides, I figured there would be some folks there that wouldn't have fishing gear but would like to try their luck. That hunch turned out to be true. I also ended up getting some nasty wind knots in 2 of my reels, so having extra guns came in handy.

FOR THE LOVE OF TOGETHERNESS:
As it turned out there were many couples at this event, so the waters were littered with tandems. Most of these couples were first-timers too. I think the word "kayak" may now be on some Christmas lists. 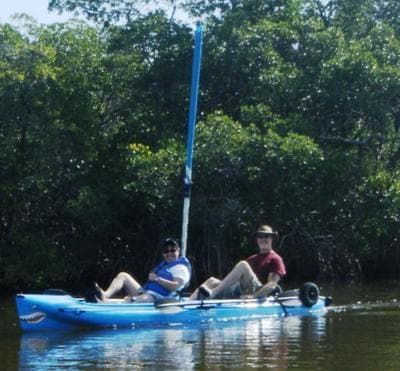 Let's talk about this boat a little. It's a Hobie tandem, and they have the optional sail. They used it a little that day, but the wind was too gusty to use it all day. He also has a depth finder/gps mounted on the other side. It's set up to be portable and is really slick. What is really important is the decal on the bow. I think that is just too cool. We talked about it, where he ordered it, how easy it was to put on, and how well it's holding up in the salty environment. Once I get the website info I'll be passing it along. I can't decide if I want "flying tiger" teeth, flames, or maybe some stripes inspired by Chip Foose.

THE FISHING REPORT: A buddy of mine fishes this area a lot (E. G. Simmons Park), and gave me some great tips. He did everything except leave a trail of breadcrumbs to the honey holes. However, he was going to be at the park at dawn, we wouldn't get on the water until 10:30, so that good recon didn't do me much good (but it will later). However, I made my way to some back waters that were loaded with structure and out of the wind. All sorts of islands, and channels, and oyster bars. I could have spent the entire day back in here. I did some exploring in other areas but kept coming back here. This area is also pretty skinny in places, so boats rarely invade. 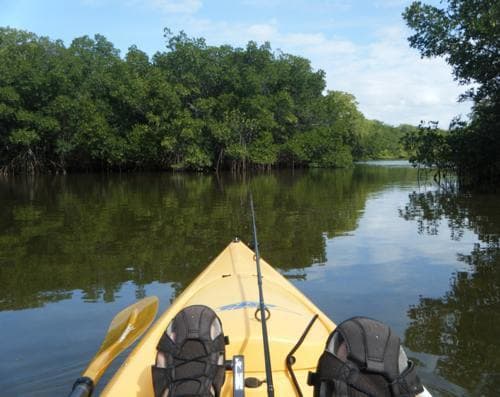 I saw numerous redfish as I explored this area. Of course they were all swimming away from me. But now that I've spent some time back in here, I know where the better fishing spots should be, and next time I will approach with a little more stealth. 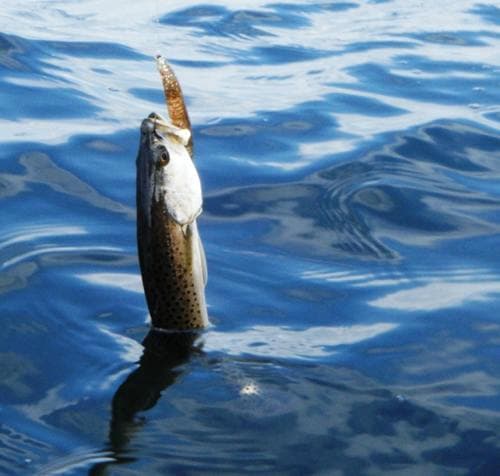 The next fish was this flounder. I didn't have a measuring device with me, but this one may have been legal. I released it as well. I had second thoughts about that, because I bet if I had kept it, lightly battered it, and fried it, it would have curled up in a similar manner as it was laid upon a toasted bun. Next time...

The third fish was a lizard fish. A nasty creature for sure, not worthy of anything, especially getting face time here.

By mid afternoon the wind picked up, the outfitter came and picked up his boats, time to go home. Sure, it would have been nice to catch a bunch of quality fish on the last outing, but I still score it as a win. Any day on the water is a win - period.

A WORD FROM OUR SPONSORS: As I get the decorations down from the attic, I will be on the lookout for my kayak decorations from paddling.com. My office will definitely represent our sport. Here's how you can get yours.

2010 may be a wrap as far as fishing opportunities go. But, looking back on my upcoming weekends, I'm certainly not sad about not spending them on the water. It's about family, friends, maybe a little downtime, and getting ready for 2011. But for now, get ready for tomorrow. And don't forget to get the leftovers in the fridge early. 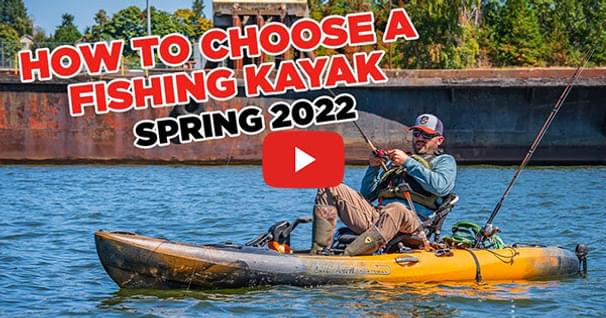 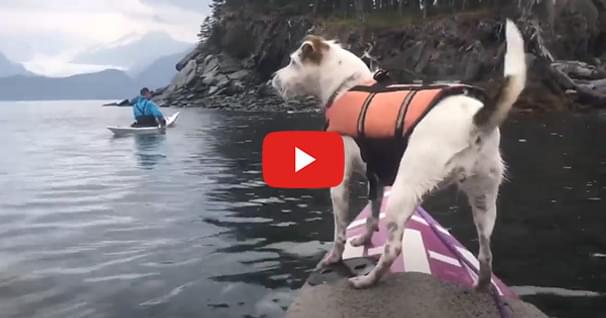 Watch these two friends on a salmon fishing trip. While one friend attempts to spear a salmon (and… 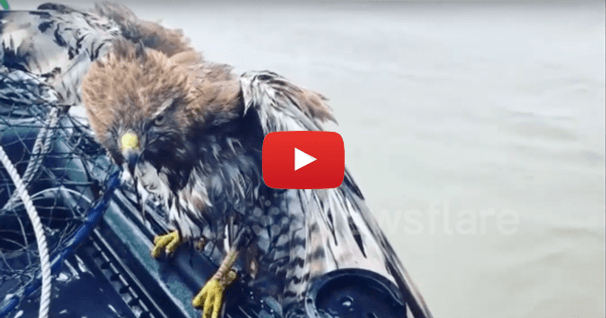 Kayak Fishermen Save A Red Tailed Hawk Struggling in the Water

A red-tailed hawk was rescued by two kayak fishermen, Matt Wells and Dana Scroggins, after it was… 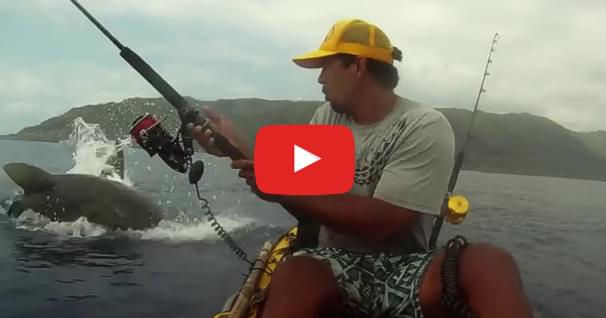