AVILA BEACH, Calif. (FOX26) — What started as a peaceful morning of kayaking and whale watching turned into one very close call for Julie McSorley and her friend, Liz Cottriel, of San Luis Obispo.

"I still have an adrenaline rush!" McSorley said, Monday afternoon.

They were kayaking off the coast of Avila Beach, watching whales about 30 feet away from them. Several other paddlers were in the area observing the whales.

"I saw the big pool of fish, the big bait ball come up out of the water. I saw the whale come up," McSorley said. "I thought, 'Oh no! It's too close."

"The whale was right here in my face, literally," Cottriel said.

"All of a sudden, I lifted up, and I was in the water," said McSorley, who was recording the whole experience on her cell phone.

"I'm thinking to myself, 'I'm gonna push. Like, I'm gonna push a whale out of the way! It was the weirdest thought. I'm thinking, 'I'm dead. I'm dead.' I thought it was gonna land on me," Cottriel said. "Next thing I know, I'm under water."

Once McSorley surfaced, she waited for Cottriel to surface, too.

Moments later, other paddleboarders and kayakers came to their rescue, making sure they hadn't been bitten.

"They thought the whale had the kayak in it's mouth," McSorley said.

And the two hopped back on, and rode to shore.

"We got back to the car, I was shaking my shirt and a bunch of fish came out of my shirt," Cottriel said.

There was one casualty from the close call: McSorley lost her car keys.

But she, and her friend, gained an unbelievable story to tell.

"I was infatuated by them and in awe," Cottriel says. "But I never expected one to be right here, in my face!"

Reports have indicated that researchers are also trying to locate the whale to ensure its safety after the incident. 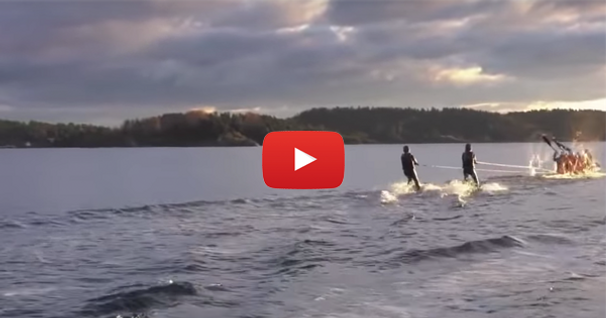 Who says you need a powerboat to go waterskiing? Turns out all you need is the Norwegian Flat Water…