The more I lecture and give clinics in how to negotiate the surf zone in a sea kayak, the more I am confronted with misinformation in the paddling sector. The two most common quotes I hear are "brace into the wave and you will stay up" and lay on the front deck when you punch through a wave. I believe these are two fine examples of "a little bit of knowledge can be a dangerous thing."

I have dealt with the details of "brace into the wave and you will stay up" in the USK article "Side Surfing Control". You need to do more than brace to stay upright. If you do not properly edge your kayak all the bracing in the world will NOT keep you upright.

As for "lie on your front deck", I will share with you what I have learned and observed with all of my years of playing and teaching in the surf zone. See USK article "Launching A Kayak Through Surf", for the full strategy of launching your kayak through surf. Right now we are focusing on the fine details of punching through a wave which is only one component of getting through the surf zone.

As you approach a wave you can determine if the wave will break over you. The bigger the wave the more momentum you will need to break through the wave. This is where you will want the most power out of your forward stroke. To get the speed, I recommend you paddle with a more vertical stroke. As you can see, as the paddler gets closer to the wave he has increased the angle of his stroke for the most power.

It is important that you do not get panicked and do what I refer to as the "windmill stroke." This is more common with surf novices. The paddle appears to be moving at ninety miles an hour but there isn't enough power in the strokes to tow a flea.

When you stroke, be sure to get good purchase on the water and use full torso rotation throughout the stroke. Your goal is to get as much speed as you can so you and your kayak will have enough momentum to punch through the wave.

As for the timing, refer to the launching article for more details. It is best to not be where the wave breaks right on you. However, there are times you just cannot avoid it. This is where you need to PUNCH THROUGH. This method of punching through a wave is good for breaking waves or large whitewater waves.

In concept you want to have the most momentum and the least amount of resistance to the approaching wave. To present the least resistance one would have to lie on the front deck and put their paddle in the rolling set-up position (close to the deck and parallel to the kayak.) After using this method quite a number of times, I strongly disagree with it's use when in a sea kayak.

You will notice the paddler is leaning forward but NOT lying on the front deck. You want to maintain a good paddling posture so you can continue to paddle as the wave is breaking over you. The wave will be over you very quickly. It will feel like a momentary stop of your paddling cadence but try to keep your stroke going. As the wave passes over you you want to stay upright. Taking a stroke can give you the balance you need. Every stroke is a potential brace.

This is the point where I will alter the style of my stroke. When I am under the wave, my balance point can be drastically affected. I want a stroke that provides me with more support until I have visual cues again. The first few strokes I take after getting hit by a wave are usually supportive strokes. I use more of a sweep stroke with a climbing angle on the blade. See USK article Supportive Forward Sweep Stroke" for more details on the stroke. If I use my power stroke as my first stroke, I can find myself with my blade pointing straight down when I may need some support. There is a time for power and a time for support. This is a time for power with support.

When I have laid on my front deck I found myself even more unbalanced. In addition, if you lie on your front deck your paddle has to be on the deck with you, thus not providing any support or momentum. Again, lean forward but maintain a paddling position.

If you look at the picture, you can see the paddler just punched through the wave and his kayak is leaning to the right. If he had laid on the front deck he would have been over. He is in the process of performing a forward supportive sweep stroke for stability and forward thrust. If he used a full power stroke his blade may have provided enough support to to keep himself upright.

Once you are through the wave and feel balanced you can then go back to power strokes with a more vertical shaft. If a wave breaks over you, it is common to be at a dead stop or even be heading backwards. This is where power is critical. You want to get out of that area as quickly as possible. You don't want to have another wave break on you if you can help it.

Depending on the wave set and if you were back surfed, you may be able to cover enough distance to get over the next wave before it breaks, if you paddle fast enough.

More likely than not you will find yourself racing toward another wave that looks like it will break on you, but if you want it bad enough you will get over it just in time. I personally enjoy this type of wave. I like going up the face of the steepening wave so I can launch my kayak over the top of it and catch some air. I remember one time when I just made it over the top of the cresting wave and my kayak was fully airborne. I must have leant to the side as I went up the face because as my kayak descended toward the water it slowly flipped over. I landed completely upside down. I was laughing as I went over so I had to quickly roll up because I was laughing away my air supply. This was the only time that ever happened to me. I usually land right side up.

I cannot emphasis enough the "will to succeed." More times than not, you will make it over the wave you think is going to crash on you if you paddle with purpose. I tell my students, "you have to really want it." It also helps when the adrenaline kicks in. Don't forget that torso rotation.

It is a great feeling as you get over the crest of the wave. If you have timed the set so you are not heading into the bigger waves you are home free. You still want to paddle with purpose until you are well outside of the breaking area. You want to get to the swell zone. That is where you can relax and your kayak will only go up and down well away from steepening & breaking waves.

After punching through some waves, I take a few minutes to make sure I am ready for the days paddle. I check my equipment and change clothes if necessary. Of course you have properly stored and connected all the equipment you wanted to keep before going through the surf zone. I have learned (the hard way) that if you want to loose it just stick it under the deck shock cords without tying it off.

I have been hit by some powerful waves over the years. I recommend you use a helmet in surf. I stopped wearing my sunglasses through the surf. Aside from having them ripped off (even with safety straps attached), I hate it when they are covered with water droplets for the whole day. Since I have to get to my little day dry bag for my hanky to clean the glasses, I figured I would just keep the glasses in the bag until I cleared the surf zone. Then I can put on clean glasses and my hat. I store my helmet unless I continue to play in the surf or intend to play around rocks.

As always, turn and check the beach to see what it looks like before you paddle away. It is amazing how different beaches appear from the water side.

As I stated at the beginning, if you want to get through the surf zone I recommend you DO NOT lie on your front deck and be passive as the wave breaks over you. Lean forward, drop or tilt your head as you prefer and paddle through the wave.

I like to make the analogy of riding a bike. If you keep peddling you have greater balance. If you stop your momentum your balance is gone. Have you ever seen a bicyclist doing the stop sign dance? He or she is actively keeping their balance. They are not laying motionless over the front of their handlebars.

If you want to punch through a wave you need to have momentum from a good forward stroke and a body position that will allow you to react and paddle as needed. 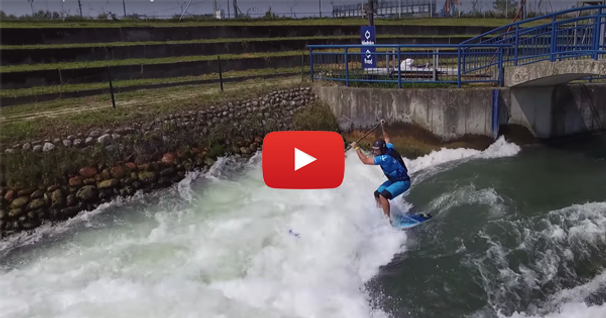 Watch Adam Boril paddle the Cunova White Water Center in Slovakia. Do you think you would have… 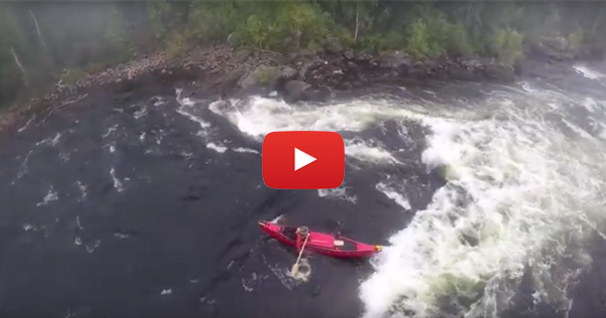 "I shot this video while on my trip down Northern Saskatchewan's Porcupine River. To make it down the… 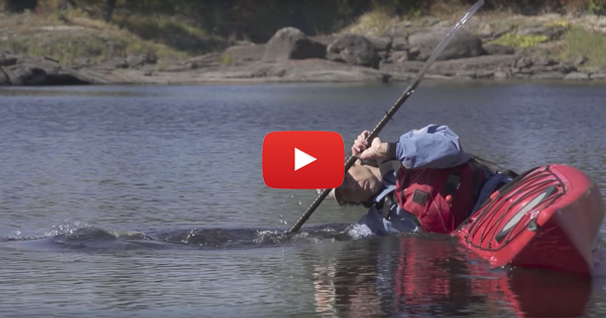 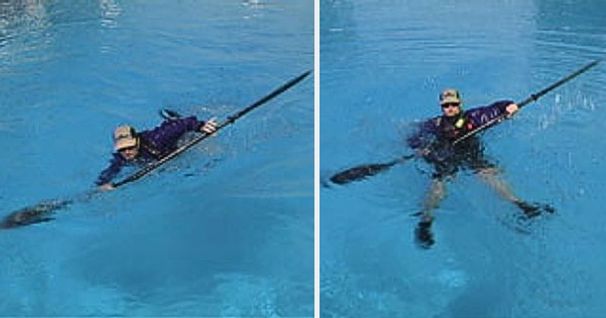 For those of you who have never visited Santa Barbara, CA, I can honestly say it is a beautiful little…