I guided a high-end trip once in northern Quebec. The lead guide focused on good food to keep the clients happy and content. He did a good job at it. The one thing that impressed me (and the paid guests) was on day five of the eight day paddle he opened up a small barrel and released a blanket of fog, looking as if some 80s rock band was about to go on stage. Dried ice was packed inside the barrel to keep a large roast fresh and a couple cans of beer cool. Amazing!

As most of us know, dehydrated meals are lightweight (and usually tasty), but there's something about packing a few luxury food and beverage items, at least for the first few days, that can really add to a trip. Question is: How to do it? Here are a few tips...

I pack a steak for the first night, marinating it at home and placing it in a zip-lock bag and freezing it. The frozen marinade adds to the length the meat stays cold. I even wrap a layer of newspaper around it as well. It's a good insulator and it gives you a bit of fire starter as well. Other good insulators are pipe insulation, iron board material or a hollowed out chunk of styrofoam.

Frozen meat should be placed in the center of the food bag/barrel, which is always kept away from direct sunlight, or stored in a small cooler. The soft sided cooler bags don't necessarily work as well at keeping things as cool as plastic, but when empty they can easily be stuffed into your backpack for storage.

Meat can be kept bacteria free for up to four days by wrapping it up in a piece of J-cloth or cheese-cloth that has been soaked (not saturated) in vinegar. The vinegar smell/taste disappears as soon as the meat is placed over the fire. Cheese can also stay fresh much longer by wrapping it up in a vinegar soaked J-cloth or cheese cloth and then dipped in paraffin wax.

After day two, meats like bacon and sausage are used. They'll last longer than other meats due to the high amount of preservatives. I also vacuum-seal meat and vegetables to keep out the moisture and let them stay fresh longer. Don't go out and buy a vacuum machine right away though. Most grocery stores will seal your purchase free of charge.

Crushed ice, like the type you see at the grocery store for fish and other sea-food, is the best ice to pack in your cooler. It lasts longer than regular run-of-the-mill ice and the store will probably give it away for free.

Dry ice works great to keep items completely frozen for up to six days. Also, as it melts it turns directly into carbon dioxide rather than a liquid, leaving no problems with freezer burn or wet food bags. It works well for meat, margarine, ice cubes and even ice cream. But it has a tendency to burst open pop or beer cans (the trick here is to use flimsy cans and a light, watery beer). Dried ice also weighs a fair bit and can be a real hassle to find if you don't live near a major city with a medical supply business.

If you're just looking to chill your wine for dinner, just store it in a collapsible water bottle like a Platypus, and then troll it behind the canoe or kayak on a long rope about a half hour before reaching camp. 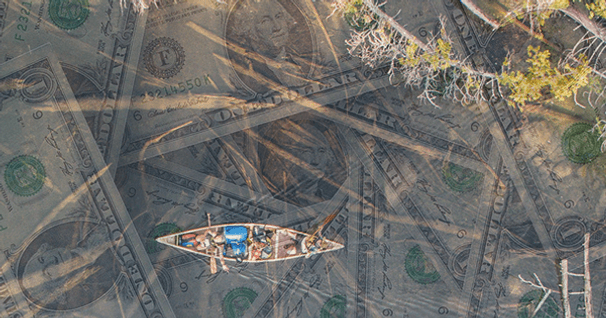 A Matter of Principle in the Wilderness

How to Plan a Multi-day Gourmet Paddling Trip (Part 2)

Last month, we looked at the easiest way to plan daily meals for a multi-day paddling expedition because…