The "Hand of God" is a very useful rescue technique for dealing with beginner or novice paddlers who are stuck upside down, or for any paddler that has been knocked unconscious while upside down. The Hand of God is a means of flipping a victim upright while in your kayak. Let's look at how this works. 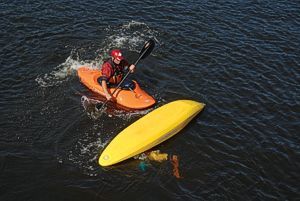 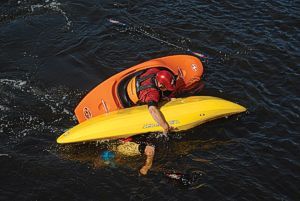 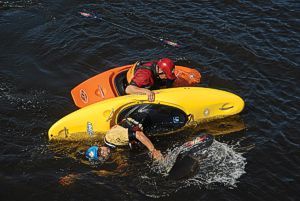 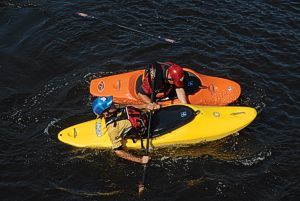 The natural thing to do when trying to flip someone upright from your kayak is to pull her head up towards you. You can get a paddler's head out of the water like this, but it is very hard to completely turn the kayak upright. Instead, try to simulate the same motions we go through in a roll: start by rolling the boat up and finish with the head. Move in beside the victim's boat, drop your paddle in between your two boats, and reach with the closest hand across the hull of her kayak to grab the cockpit rim that's furthest from you. It's a long way to reach, so you'll need to lean on the upside-down kayak.

Once you've grabbed that far cockpit rim, place your other hand on the closest edge of the upside-down boat. Now push down on the close edge, and pull the cockpit rim up and toward you aggressively. The trick is committing yourself to the move, and using the victim's kayak as a brace while you roll it up. It should be noted that smaller paddlers will have a harder time reaching across the hull to the cockpit rim, especially with the wider, flatter-hulled kayaks. It will require somewhat of a lunge over the kayak to grab the cockpit rim, which makes it even more important to practice this technique before trying it in a real rescue situation.

The Hand of God will work for beginner to intermediate paddlers who are in a situation where a swim should be avoided. In this situation, the T-rescue will usually be the first choice, as it provides the rescuer with more room to manoeuvre, and less direct contact with a potentially panicky victim. If there isn't enough room, or the victim doesn't have the awareness to do a T-rescue, then the Hand of God will work.

If you do have to use the Hand of God to pull a paddler upright, be sure to cover your face, as this rescue tends to surprise victims, and paddles can flail around uncontrollably as they roll upright. An unconscious or injured paddler will roll much more easily, and won't pose as much of a threat to the rescuer. The actual type of injury sustained will dictate the precautions that need to be taken so as not to cause further injuries, but the first priority is always making sure a victim can breathe and is out of danger's path. This means getting him upright immediately. Once he's up, you can then worry about further first aid, such as stabilization for potential neck and back injuries.

This is an excerpt from Ken Whiting's recently revised book, 'The Ultimate Guide to Whitewater Kayaking - 2nd Edition' 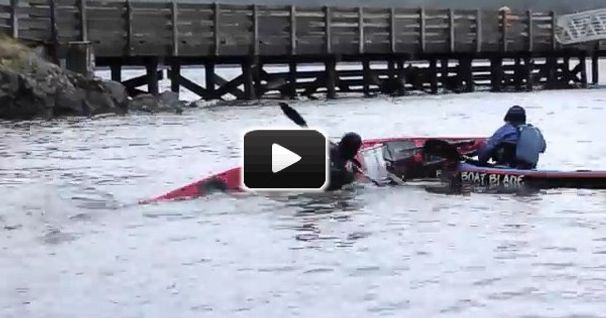 The Dump is a fast, simple way to empty a boat for a kayaker who has a solid roll and a helpful friend.…