Going Kayak Fishing with a Friend

In a previous article (Heroes On The Water), we discussed how the paddle angling community is a "band of brothers". When a brother needs a hand, we do what we can to help out. So, when I learned that a brother from Texas would be in town for a few days and wanted to do some kayak fishing, I decided to see where I could be of assistance.

THE FORUM CHAT: I read on one of the Texas forums that one of their long-time members (Chris) would be in my Florida neighborhood soon. He was looking for information concerning kayak rentals and just some general info about how the fishing currently was. He'd be camping at Fort DeSoto for one night (the night he landed in Tampa) and would only be able to fish the following day, leaving around noon. He had made a post on one of his Texas forums, but also on the west central Florida forum as well. Many folks were quick with answers, so he had no problem getting plenty of up-to-date fishing information. Still there was a concern regarding getting a kayak. There is a rental operation there on the island, but they don't open up until 0800. If fishing is on your Florida agenda this time of year, then starting at 0800 is way too late. I had a possible solution.

THE POSSIBLE SOLUTION: Since I'm unemployed (free time while waiting for the phone to ring) and have a backyard full of kayaks (and can only paddle one at a time), I offered to play "guide" for a day. So, a string of forum chats and e-mails followed and cell numbers were exchanged. The plan was set in motion. Since this would be a KAYAK outing and I have several, it was important to me to provide Chris with something similar to what he currently paddles. I sent pictures and specs of my fleet. Chris had no preference. Must be a newbie.

THE DESTINATION / THE TARGET SPECIES: Since he'd be camping out at Fort DeSoto, it made perfect sense to fish from there. We would be fishing the same area I noted in the May article (Finally - A Fishing Report). We'd launch from the same spot as I mentioned in the article, cover the same waters. These waters would give us access to areas that normally hold spotted sea trout and red drum. But, this location would also give us access to beach areas that are currently holding large numbers of snook. For those of you that aren't familiar with "Centropomus undecimalis", imagine the salt water counterpart to a largemouth bass. Smart, structure oriented, and did I mention smart? This is the sort of "after" picture we were looking for … a snook caught from the beach. 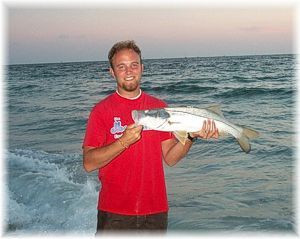 This time of year the snook congregate along the beaches and passes for their annual "feed and breed" party. You'll find big females surrounded by larger numbers of smaller amorous males, cruising the shallow waters close to the beach. This makes for some great sight-casting action, provided the surf isn't too rough. Chris has trout and redfish in his area of Texas. But this would be a great opportunity to give him a shot at a linesider. Catching anything is better than catching nothing, but snook would be the primary target on this day.

PRE-FISHING ON THE INERNET: We exchanged dozens of e-mails, concerning all aspects of fishing at Fort DeSoto fishing. We also talked it up a good bit on the forums as well, sharing the unfolding saga with the other members of "the brotherhood". We covered the weather, tide charts, nautical maps, solunar tables, you name it. Is it time to go fishing yet?

THE DAY BEFORE / PREPARATION: Chris was traveling, and I was at home getting gear together. Once again, I asked Chris which kayak he'd like to use, and once again he noted that he didn't have a preference. What's with this newbie anyway? So, I selected a pair of boats, washed them down and threw them in the back of the truck. I packed lures to target snook with, as well as my cast net and a bait bucket. The best beach snook action I've encountered has been the result of using live bait. I would be prepared. 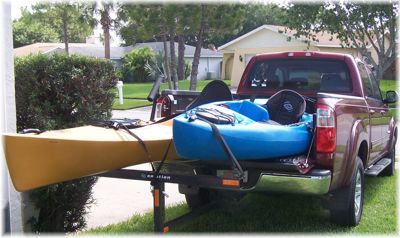 The weatherman promised us a picture postcard chamber of commerce day for our outing. I'm pumped! I set my alarm early, very early.

TIME TO GO FISHING: I'm a light sleeper anyway, but this morning I was up before my 0445 alarm went off. By 0451 I'm on the road. Around 0515, I gave Chris a call to let him know I was getting close to Fort D. He must be a light sleeper too, because he was already at the launch. It's pitch black dark and already 80 degrees. Yes, it's summertime, and to me, summertime means VanHalen in the CD player. So, I arrived at the destination with "Unchained" dialed in (and dialed up). We hit the ground runnin' …

The entrance to Fort DeSoto proudly displays an American flag that could cover a small house. As good luck would have it, the flag was laying limp - no wind. The weatherman got it right. After a quick handshake, we got the boats unloaded. We got them rigged using the headlights from my truck. By the time we were in the water the sun was just starting to rise. Once our bows parted that slick water baitfish began scurrying, and predators were quick to follow. We made a few casts but I had a goal in mind. Our first point of attack would be from the beach.

THE BEACH: We landed the kayaks on the backside of the beach, then walked across about 50 feet of sand to get to the beach itself. The surf was relatively calm (that's good), but there were no birds diving for bait (that's bad). Where there's no bait, rarely will you find predators such as snook. Still, we made dozens of casts with artificials - nothing. We both tried our hand at netting some bait - nothing. I walked back to the kayaks, caught some bait, and brought it back to the beach. We re-rigged and tried some live offerings - nothing. Time was wasting so it was time to move. Chris put his kayak in to high gear, and away we went. Pretty good technique for a newbie, wouldn't you say? 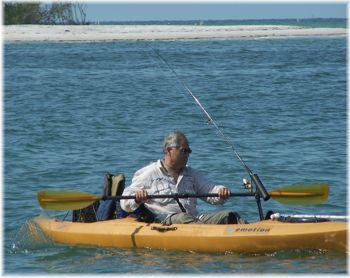 THE PASS: After a few casts along some mangrove shoreline and across some grass flats, we opted to cross the Bunces Pass and try our luck on Shell Island. Immediately after beaching our kayaks we found snook. Dozens of them, cruising no more than 10 feet away from shore. This can be an exciting time, as well as a frustrating time. We tried many different artificials, as well as live bait - nothing. Well, no snook. Chris caught a decent whiting, and I caught a small trout. Better than going home skunked, but that was little consolation when we could easily "eye" the prize. At one point I tapped a snook on the nose with my rod tip as he just layed there with that nose in the current. One angler we passed said that he was using live shrimp and having pretty good luck. Figures, the one type of bait we didn't have with us. Oh well.

THE VICTORY BEER: Finally, we decided to paddle back across the pass and work a grass flat until it was time to pack up. Once we got to the grass flat, we headed in different directions though still in sight of each other. Now, I had packed a cooler, with some crackers, a couple apples, and some water bottles. I also included a pair of "victory beers" (Corona, to be specific), along with a couple slices of lime. Chris had noticed these earlier, but that was hours ago. Crazy thing happened. At about 1204, I turned to paddle toward Chris only to find him making good time toward me. Note: The cooler was on his boat. So, we staked out our boats, cracked open those ice cold cervezas, and stopped to talk for the first time today. There was a camera crew out that day, filming someone on some sort of wakeboard, so we got a show with our beverage too. So I asked him how the kayak I provided worked for him, and he said it did fine, and the cockpit rod holder placement gave him some rigging ideas for his kayak. So, what model kayak does he paddle? It's a sit-on-top kayak that HE built from wood! As it turns out, Chris is light years away from being a newbie. More about that later.

THE LOAD-OUT: It's funny. When you load up to go fishing, you treat your gear like you just bought it. A place for everything and everything in its place. But when it's time to load up, the untrained eye would think the same gear was being stolen. Throw it in, lash it down, and hit the road. I was tired, and it was stupid hot. I would have been thankful for some breeze at this point. But, it was a great day on the water, and as if often my case, fishing was only a tiny segment of it.

LUNCH: Chris treated me to lunch at one of the restaurants near the park. It was very nice to be in an air-conditioned building. The last time I had been to this eatery, the food/service was merely decent. However on this trip, both were perfect. Very good meal, very good company. Chris had another appointment later that day, so we shook hands once again, and he was on his way. I also asked Chris to provide me some pictures and information concerning his kayak creation. Once he got back to civilization, he complied.

ABOUT HIS KAYAK: Chris built his kayak from plans he bought at JEM Watercraft. He freely admits that the estimated hours for completion are low. But I know from my experience, when doing any sort of woodworking, it simply takes longer than you think it should. But, you also don't mind investing the time, especially when the end result looks like this: 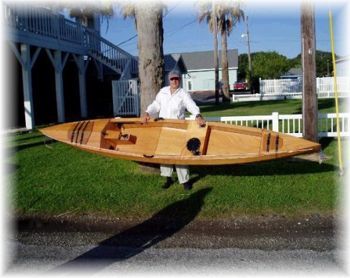 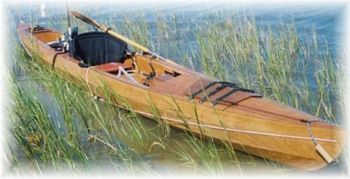 Is that incredible or what?

This was the first time I had ever played "guide" for an out of town visitor. I had a blast. So, should the opportunity arise for you to extend a similar hand to a member of the paddle fishing brotherhood, I highly encourage it. Just remember that the journey is more special than the destination (or the fish you might catch), and the things that make us different become the things that pull us together once you place them all at sea level.