Wal-Mart is a magical place. You can pick up some groceries, buy a TV, and get your oil changed. I even get my hair cut there. Recently, while waiting for my appointment, I had some time to kill. So, I wandered over to their fishing department. Wally World normally isn't on the cutting edge when it comes to stocking new tackle, but you just never know what you might find. I rambled down all the aisles, didn't find anything new, or even interesting.

So, I headed over to browse the magazines. Picked up a "Florida Sportsman", because that's just what you do if you live in Florida. I thumbed through that. Again, nothing new or inspiring. I still had a few minutes before I was scheduled to be sheared, so I continued to browse. I don't do much freshwater fishing here in Florida because of gators and snakes. But, there was a freshwater magazine that caught my eye. It was titled something like "50 Best Bass Baits Ever". What the heck, might as well take a look. I'm glad I did.

See, fish are fish. If they're predatory they behave similarly, regardless of salinity. With that being said and understood, all of a sudden these bass lures looked very appealing to a salt water guy. It made me rethink what the difference is between salt water and fresh water lures.

The major difference to me is the type of hooks and hardware used. Even the best hooks are designed to rust and dissolve in the event of a break off, allowing the fish to live and fight another day. So "saltwater" hooks aren't that big of a deal. Buy a freshwater lure if you like, and then change out the hooks as you need to. My point to all of this is to think outside the box when it comes to choosing lures. If you fish areas that receive a fair amount of pressure, I firmly believe that they wise up to seeing the same offerings day in and day out. Keep it "real", but give them something "new" to investigate. 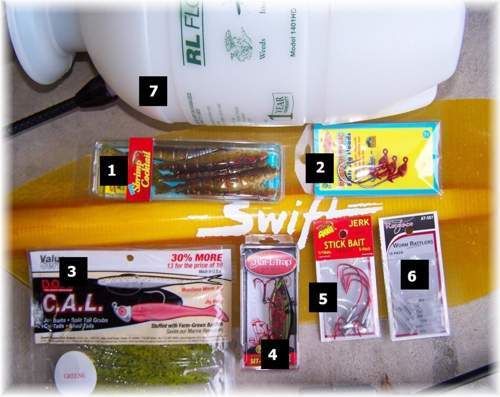 After thumbing through this magazine, it'll come as no surprise that I went shopping again. All of a sudden, Wal-Mart had plenty to offer. Here's what I ended up nabbing. Let's review:

1. MORE FAKE SHRIMP. Fake shrimp are a pretty common bait around here. But these are different, and that made me take a look. Unlike the typical DOA type shrimp, the hook point is facing the rear, and it installs so that the shrimp "swims" backwards, which is how they behave naturally. Not sure if this will make a difference but for $4, it's worth a shot.

2. JIG HEADS. No big deal here. They're just jig heads, and you can't have too many of those.

3. JERK BAITS. These were just a new color, to mimic "greenbacks", which are a popular bait here in FL. They were actually mixed in with some fresh water baits and happened to be the last pack there. I got lucky.

4. A FRESH WATER RAT'L TRAP. It's the right size and color pattern to seem effective in the places I fish. So, for $4 it's certainly worth a try. If I have to change out the hooks a few times before the lure becomes useless due to salt exposure, I think I will have gotten my money's worth out of it.

5. JERK BAIT HOOKS. The bass fishing magazine had numerous types of hooks similar to these. I'll certainly be on the look out for those at my local tackle shop, but for now, these will do. Besides, I just bought those new jerk baits and I can rig up a few while I wait for my hair cut.

6. WORM RATTLES. Putting rattles in jerk baits is something that is fairly common among the sweetwater crowd, but is fairly new to us salts. I can already see that under certain situations adding a wee bit of sound might turn the head of a lethargic fish. You just never know - adding something subtle could make a huge difference.

7. GARDEN SPRAYER. This may be the greatest find of all. A buddy mentioned getting one of these a long time ago, I just never did. Here's how you use it. Simply fill it full of fresh water before you head out. At the end of the day, use it to rinse down your lures, reels, rods, feet, etc. By the time you get home everything should be dry and ready for storage. I bought the 1 gallon model, simply because it was on sale and it will be easy to transport. This will certainly extend the life of those fresh water lures I'll be buying in the future.

So, as you seek out new ways to coax a fish into the boat, keep an open mind. Boldly go where no angler has gone before, but watch out for falling prices...

TOPIC FOR MESSAGE BOARD DISCUSSION: What's the craziest lure you've ever tried? The big question is - did it work? Thanks for your input.