On land they are Jabba the Hutt impersonators from the Star Wars film sagas. When seen swimming under water, it's as though a graceful, fur-covered refrigerator has suddenly become a star in a water ballet. Yes, the Steller Sea Lion is a beast of beauty to behold - unless you are uncomfortably close in a kayak.

First and foremost, we are talking about the Steller sea lion, a stellar member of the family that includes cuddly seals, flesh-ripping sea wolves and lumbering, proboscis swaying sea elephants. Size-wise, the Steller sea lion is as much bigger than the common California sea lion (often seen hanging around the docks in San Francisco) as those west coast creatures are to common seals (harbor, spotted, etc.). Clearly the sea lions of the north Pacific are a potential water hazard that's always on the move and occasionally up to the challenge of proprietorship as to whose chunk of ocean it is at any one time. 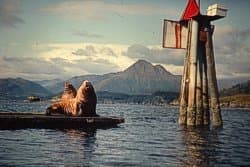 Sea Lion hangouts
Sea lions that hang out in marinas and harbor areas are said to habitualized. That is, they are used to being around humans and their noises and movements. Whether sunning on a marker buoy or commandeering a section of dock, the habitualized sea lion is the most approachable. That said, it must be understood that these guys are still absolutely wild!

Most skippers will whip past a colony of sunning sea lions as fast as reduced wake speeds will allow, the animals rarely lifting so much as an eyebrow. Try to quietly drift up to that same group in a kayak and all heck can break loose. Seems contradictory, doesn't it?

My theory is that the sea lion is used to the noise, the direct approach and the lack of interest as normal. The stealth-like approach of a small, hard-to-see-craft, however, may signal caution to the wary sea lion. Some have pointed out that this is recessive instinctual behavior back to the days when they were hunted by kayakers. I personally doubt it. I think it's more the out-of-the-ordinary movement that disturbs them. In fact, we used to chatter and paddle normally right up to snoozing sea lion cows as though we were visiting neighbors - causing nary a grunt of disapproval.

Once those sea lions move out to coastal rookeries and hauling out areas, it's another story. Sentries at the edges of haul-out rocks or beaches are quick to raise a ruckus if something unknown - even another group's sea lion - comes in too close. 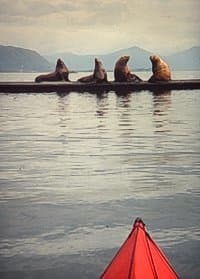 We are taught, as respectful wards of nature, not to approach animals too closely. That works in parks and other bordered areas of defined wildlife colonies. However, the further into the wilderness realm we travel the more often are we going to experience close encounters of the surprised kind! It's not uncommon for seals and their larger kin to approach boats to see what's going on. Seals are known to frolic under a kayak, arching from side to side under the boat, paddle tip to paddle tip. Sea lions are more likely to follow behind, giving themselves away with frequent blasts of air from their nostrils as they surface a few yards behind your boat. The cows in a harem quite often will drop into the water from their dockside rest and follow kayakers for miles - always staying just a little behind the stern as one cruises through the water.

The younger ones can play the aggressor by charging the boat and then dropping away like an attack aircraft suddenly remembering it's out of ammo! What young bulls do like to do is somersault right under the boat and bump the keel with their backside. It's kind of cool, doesn't cause too much anxiety in the paddler and probably makes the young sea lion feel pretty macho. I've had harder "bumps" from a submerged log.

It's very easy to approach sleeping sea lions as they tend to buddy up and snooze right on the surface. I literally came nose to nose with one dozing in a kelp bed. I eased my boat back slowly and quietly thinking how I'd otherwise do CPR on a sea lion I had just startled into cardiac arrest. Sometimes it's just the opposite. You can be quietly paddling along when the water off the bow erupts in an explosive shower as a 50-gallon drum-sized sea lion bursts through the surface, mouth wide open, fanged teeth flashing like unsheathed knife blades! Yea, it's scary - especially when you are looking down the huge, bright red throat of an angry sea lion. I was kayaking with a family once when that very thing happened... the mother of the group said "Wow, what a great trip, but I wish we would have seen a sea lion at least once." As if right on cue, a huge bull burst through the surface, barely six feet from my client. The most caution should be taken while fishing from a kayak. I found this out absent-mindedly one afternoon. I had caught and kept a stringer of good-sized rock bass. I had them attached to a chain stringer which was, in turn, clipped to a deck ring on my kayak. I was ready to call it a day and had just raised the stringer out of the water to let it drain before splaying the fish out across my back deck. As the last fish parted from the water, a huge sea lion rose up right behind it like a submarine coming to the surface. Apparently it had eyed the captive school of rock bass and figured on an easy meal.

My immediate reaction was to slap the water with the side of my paddle. That startled the sea lion into an immediate surface dive. I planted the blade in the water and power stroked the boat into the opposite direction. The picture of that huge animal tearing into that stringer while it was still securely attached to my deck sent shivers down my spine. I still use a chain stringer, but it's tied on with a slip knot now!

Encounters are going to happen whenever and where ever we share the planet with other creatures and critters. Avoidance is the preferred action but sometimes those critters may be just as curious as we are - it's a big ocean out there that can become mighty cramped and full of surprises at times. Learn where haul-outs might be; learn what behavior animals might be performing at certain times of day and be especially keen on how animals might change their behavior if provoked or scared.

I don't want some 1,200 pound ice box with teeth the size of a tiger becoming defensively startled by me being in the wrong place at the wrong time. Still, that's part of the "awe" that makes our sport so breathtaking and special. Always - be safe out there! Tom Watson is an avid sea kayaker and freelance writer. He also posts articles and thoughts on his website tomoutdoors.com. He has written 2 books,"Kids Gone Paddlin" and "How to Think Like A Survivor" that are both available on Amazon. I learned to sea kayak in Alaska, in the waters of the Pacific Ocean surrounding Kodiak Island. From… 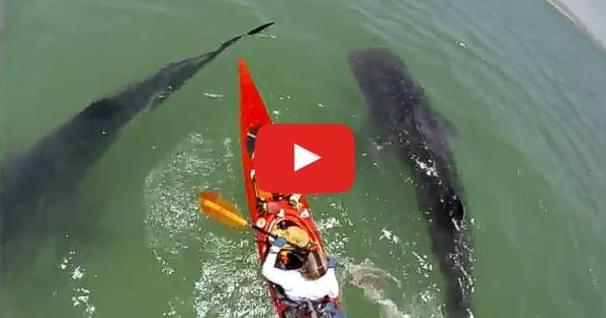 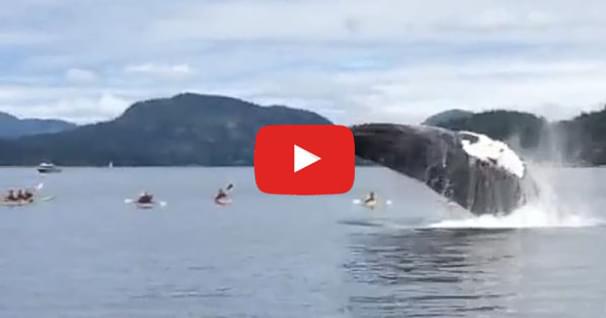