The "Scoop Rescue" is a method for getting an injured or disabled kayaker back in their kayak. Since I have made a distinction between a Capsize Recovery and a Rescue, the Scoop method can fit in either category. A capsize recovery is when you can handle the situation within the group and there are no injuries. If you need to call for outside assistance, or if there is an injury, I upgrade the recovery to a rescue.

Performing a Scoop with a double follows the same concept as used on a single kayak but certain adjustments need to be made. In some cases one may find it easier to perform the Scoop on a double if you are the second paddler in the water.

The primary reason you would need to use the Scoop in a double is when on of the paddlers cannot get themselves back into the double due to injury or disability. If staying in the water until other help arrives is not an option then a Scoop may be you only viable solution.

After the capsize the two paddlers from the double (tandem) kayak will find themselves in the water. Once it is determined that one of the paddlers cannot get back into the kayak by climbing back up on a righted kayak, the need for the Scoop method is determined. In this case let's give the injured paddler a dislocated shoulder due to an incorrect high brace. As they were capsizing this paddler (paddler B) tried to brace by reaching out with a straight arm instead of keeping the working elbow low and pointing down. The brace failed and the paddler dislocated their shoulder.

Then paddler A moves quickly to the other side of the overturned double. In this example Paddler A finds it easier to climb onto the hull near the bow since it is narrower. Once up on the bow, Paddler A slides along the hull until they get to their partner. Paddles can be stored in a variety of locations keeping in mind that a paddle stowed along the long axis of the boat will cause little resistance when you right the kayak. Paddler A has a cowtail on their PFD with a "pearbeaner" which is holding his paddle. This is a good time for a paddle leash.

Some double kayaks will allow Paddler A to climb right over the hull by the paddler B. The size of the kayak and the skill of paddler A will be the determining factors. Keep in mind the hulls on composite kayaks can be very slippery.

Paddler A has to make sure that Paddler B is far enough into the cockpit so paddler B doesn't slip out when the kayak is rolled up. To ensure that paddler B comes up with the kayak and is in the seat paddler A needs to keep paddler B in position as the roll up occurs. This is done by hold paddler B and part of the coaming during the roll up.

If paddler B is conscious then constant communication needs to be occurring between the two paddlers in order to minimize the amount of manipulation that is occurring. As paddler A falls back their body weight is what is going to bring the kayak upright. Your goal is to right the kayak and have Paddler B end up in the cockpit sitting right side up. Having paddler A in the water is a great advantage when performing this skill. It is a lot easier to move around when you are not sitting in a kayak. In addition, paddler A has a lot more leverage and counter weight potential. When paddler A rolls the kayak up they need to be ready to keep the kayak from continuing to roll over the other side.

When the kayak is rolled up paddler B should be in their cockpit. In this case paddler B is toward the front of their seat and leaning back on their seat back. Paddler B held their injured arm from moving throughout the maneuver.

Once the kayak is stable and paddler B is properly situated for the journey, paddler A needs to get back into their cockpit. If paddler A needed to help paddler B sit upright the only place that would give enough leverage would be sitting on the deck behind paddler B.

Their are a number of ways for paddler A to get on the deck or into their cockpit. Regardless of the method used they need to do it in such a way as not to re-capsize the kayak. In this case paddler A does a scramble recovery which does not use any external bracing. Paddler A is agile and this particular double kayak is extremely stable.

If paddler A needed to move around on the deck to help paddler B, then a double outrigger can be used. In the last illustration we see an example of the paddle and paddle float used as an outrigger, to one side, so a second person can climb into the double kayak. In our case we have an injured paddler that is unable to help, so paddler A needs to set up a system that provides him or her with support. If the paddle were placed under the rear bungee cords and a paddle float were put on each blade there would be a set of training wheels for the kayak. With support provided in both directions Paddler A could slide along the top deck and get right behind paddler B to assist them in moving around in their seat.

Once paddler B is as comfortable and stable as possible then paddler A needs to get into their cockpit to begin moving the kayak toward the nearest take out that will provide the quickest option for advanced care.

As you can see the Scoop method gives you a technique for getting an injured partner back into your double even if there were only the two of you out there. If you paddle a tandem kayak I would highly recommend that you and your partner practice this skill before you ever need to use it.

As I mentioned earlier, the Scoop method was originally developed for disabled paddlers who could not get back up on their kayak. However like anything else there are ways to adapt one technique to meet other needs. I love it when people take an idea, build on it and make it their own. I was recently approached at the Paddle Sport 2006 show in New Jersey. Frank comes over to me to thank me for our videos. He tells me he and his wife Rose came up with a variation for the Double Scoop Rescue. They use it as their standard capsize recovery technique when they paddle their tandem kayak. They have combined the scoop method with the wet re-entry concept.

Instead of Rose having to climb up onto the deck of the double, Frank lays over the hull and lifts the edge of the tandem. When ready, Rose side slips into the front cockpit and Frank rolls back and Rose ends up in her seat with the kayak upright. Since Rose is not injured she can be an active participant in the recovery.

On a stroke of genius, Frank puts a cockpit cover over his rear cockpit before he climbs on the hull to assist Rose. This way he minimizes the amount of water he has to pump out of his cockpit. The scoop method scoops more water because of the weight in and on the kayak as it rolls up.

Then Rose puts both paddle floats on one paddle so she can stabilize the kayak in either direction instead of having to depend on a sculling brace. Frank is able to climb up on the deck because Rose has the double outrigger in her hands. Then Frank added, he sits behind Rose and they both pump out the front compartment. When finished, Frank slides back along the deck until he can get into his cockpit. After finishing pumping out his cockpit (remember that Frank has little water because of his use of the cockpit cover), Rose deflates the paddle floats while Frank paddles the kayak forward for stability. After both paddle floats and pumps are restowed Rose joins in paddling with Frank.

When a student takes an idea and builds on it, there is no greater reward to a teacher. Thank you Rose and Frank Chillemi from Long Island, NY.

Pictures seen above were taken from the USK Video "Capsize Recoveries & Rescue Procedures". 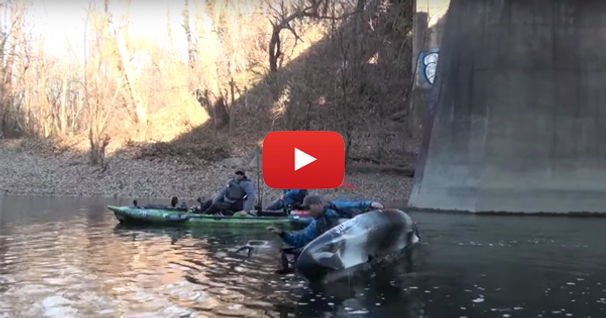 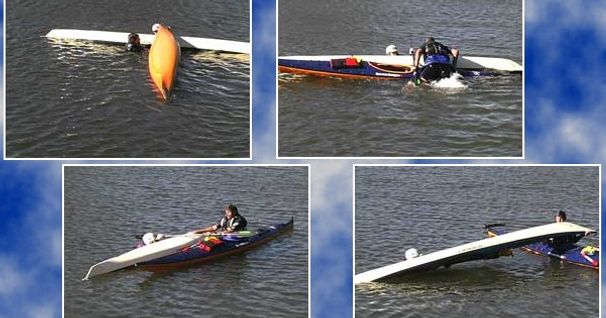 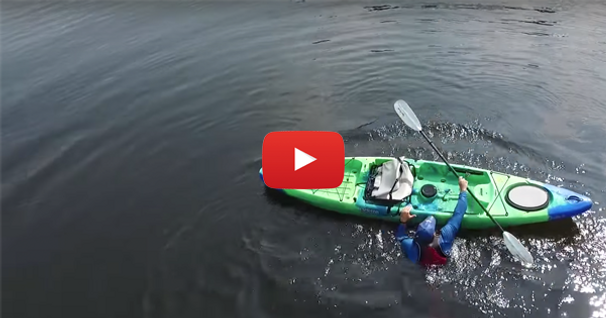