Double Dipping in a Canoe

Notice how nearly every new non-motorized boat introduced into the recreational paddling market is called a "kayak"? Just give it a pointy bow and throw a double bladed paddle at the buyer and, voila! It's a kayak. Seems that using a two-bladed paddle is the key for qualifying these mutant boats as kin to the traditional kayak.

Seems, however, that canoes are exempt from that misguided moniker, especially canoes designed predominantly for solo paddling. These boats do as well or better when the paddler uses a double bladed "kayak" paddle.

How this all came about must speak of the ease by which users can paddle their crafts while maintaining speed, balance, and control with the double blades. A brief look at history suggests the natural evolution of the double blade, but not without a few weird bends in the branches of the evolutionary tree.

The first boats were probably coracles, the "skin bowl" boats one sees in the Mid East, Africa and Europe where the boater uses a long pole to control the vessel. As boats evolved, so did the pole. A broadened side enabled the operator to gain more power, more purchase with the water. Add a broad side on one end and a shaped section where your hand goes for better gripping and control, and you have yourself ancestors of the modern paddle. 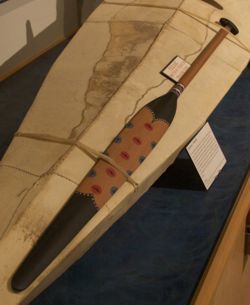 Few kayakers even realize that Arctic paddlers along the Aleutian Island chain back through the island of Kodiak developed and used a single bladed paddle whose tip tapered to a point. There is a clue here that suggests why some used a single blade and other the double. The key is how they sat in their canoe/kayak.

Many natives sat "horse style" on a bedroll places along the keel of the kayak. They'd straddle it, sit on it with their weight distributed across their butts and probably down each leg to bent knees. This would position them higher in the cockpit making it seem like the double blade would be better suited to clear the deck beam?

Most blades were made out of black spruce, a common species of driftwood along the Pacific Rim. The amount of wood that would needed to make a double bladed paddle of the appropriate length (seven feet, plus) meant that a two-bladed paddle would be quite heavy and was probably used only when the paddler wanted/needed to go fast – as he would when hunting caribou at a river crossing.

In scanning Zimmerly's definitive book on native kayaking, "Qayaq", one finds that many of the photos show both kinds of paddles being used. It may have been common to carry both types on board the craft. "Ok", you say, "Thanks for the history lesson, but what about canoes?" One of the earliest canoe type boats to use a double paddle was the Rob-Roy. However, it looked more like a kayak than a canoe! General consensus is that the single bladed paddle became popular with paddlers of single or solo canoes. Paddling solo allows the paddle to have more freedom in paddle swing, there is no cadence to worry about, and frankly if you are trimming out your canoe by sitting near the middle balance point, you'd have a longer, more awkward reach to get past the gunwales on each side if you were using a conventional, single blade.

Most canoes designed specifically as a solo boat have tumblehome built into the boat to bring in the gunwales a few inches to make it easier to reach out and paddle. This design was created with single-bladed paddlers in mind, but the design helps solo paddlers using longer two-bladers as well.

Touring kayakers typically use either a high stroke or low stroke for extended paddling. Once a kayak is up to speed it can cruise along without much additional power in the paddle stroke (calm seas, no wind, therefore little resistance). The low stroke can maintain that needed push without as much strain on the paddler. Many maneuvers are completed as part of a low stroke (namely sweeps and casual rudder maneuvers). The high stroke works when you need power – lots of it and right now! Sculling requires a high angled stroke as well.

I use a double blade in my solo canoe (Wenonah's Escapade). Technically it was designed as a tandem for smaller paddlers, but the dimensions also work for a larger paddler considering a solo boat. I find that I don't tend to use my torso twist as much in the canoe when paddling with the double blade as I do when in my ocean-touring kayak. I think its because I am not as securely seated in the canoe as I am in my tighter-fitting cockpit in the kayak. I use a wicker seat for canoeing and it doesn't lock your butt in as firmly as does the tractor seat used by many solo paddlers.

Completing a "J" stroke with a double paddle is awkward – and generally unnecessary. If one needs to end the power stroke with a correcting kick, you can simply hold the blade perpendicular to the water and apply pressure as necessary. You then resume the stroke on the other side.

It's been 40 years since I was canoeing on a regular basis here in Minnesota. Now, after 20 years of sea kayaking in Alaska, I find myself re-experiencing the joys of canoeing – most of 'em, anyway. I prefer solo canoeing using a double paddle as I ply Minnesota's lakes and slower rivers. I am sure my years of paddling the kayak play into the ease at which I can maintain a good, steady, straight clip in my solo canoe using the double paddle. Since most solo canoes have a very similar footprint as a canoe (beam to length ratio, shallow V cross section) it’s not surprising how they respond to that same form of propulsion.

I've tried the single blade in my kayak, while sitting, and remember thinking that I was already spoiled by the feel of the double. And while a stream of sky blue waters blood still runs through my Minnesota veins, I must say that the double blade and my canoe are inseparable.

You can see that there are many factors that can influence what type of paddle you might choose for your solo canoeing efforts. Clearly both carry a lot of history with them and evolved from dealing with resource and design issues.

The final, subjective word from this paddler is that there is a certain paring of advantages that a solo canoe shares with a double "kayak" paddle that makes for a unique paddling experience. Whatever floats your boat!

Tom Watson is an avid sea kayaker and freelance writer. He also posts articles and thoughts on his website: www.wavetameradventures.com. He has written 2 books,"Kids Gone Paddlin" and "How to Think Like A Survivor" that are available on Amazon.com. 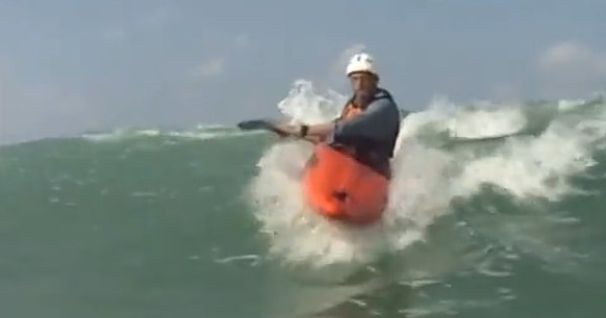 When you first go out on the sea in waves, you'll probably find that paddling into the waves is really… 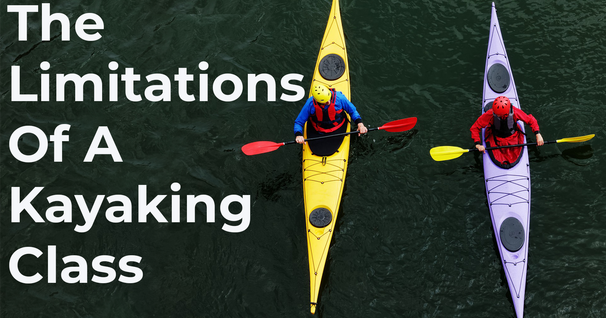 Landing your kayak through a surf zone can be fun or terrifying. Fun if you know how to do it and…