Rolling in moving water can be more difficult in some instances, but current can also help your roll out at times. The biggest problems paddlers have with rolling in moving water are the mental hurdles rather than the physical ones. There's no doubt that being held underwater with your legs sealed into a big plastic boat can be somewhat disconcerting, even without the sound of whitewater roaring in your ears. 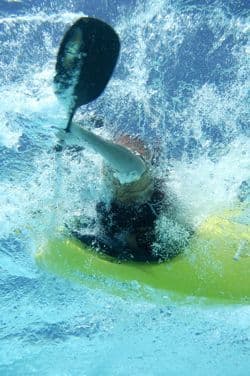 If you're having trouble rolling in moving water, then the best thing to do is to find a nice, mellow, deep section of current to flip and roll repeatedly in. As you get more and more comfortable, move into a faster current and practice there. Take your time and build your confidence slowly. On the physical side, there are two things that can cause problems with your roll. By trying to roll up on the upstream side, current has the tendency to force your active blade underwater more quickly. This doesn't mean that it's impossible to roll; it just means that you will get relatively less brace from your paddle and will have to have a quick and effective hip snap.

Waves are another potential source of problems for rollers. Large waves, or, in particular, breaking waves, can push the boat around and make it more difficult to get your paddle set up on the surface of the water. To minimize the effects of the current or waves, the ideal scenario is to set up and roll on the downstream side of your kayak. On the downstream side, you are pulling against the current, which can even provide added bracing power (not that you really need it!). As we already mentioned, with good technique you can usually get away with rolling on the upstream side of the kayak, but this is where an offside roll comes in handy.

Rolling in a hole Rolling in a hole can be one of the easiest things to do, or it can be virtually impossible. It all depends on which side of the boat you're trying to roll up on. If you're trying to roll up on the upstream side of the boat, give up! You're not going to get anywhere. On the other hand, if you are setting up on the downstream side, then there's a good chance you'll be upright before you know it. The reason is that the green water rushing under the foam pile can hit the power face of your paddle and literally push you upright with minimal hip snap involved.

You might even have seen someone unintentionally do a full revolution in a hole (otherwise referred to as "window shading"). This happens when a paddler is rolled upright more quickly than was expected, with the help of the hole. In the true window shade, the stunned paddler then catches her upstream edge and gets flipped right back upside down! This may shed some light why some people also refer to holes as "rollers"! 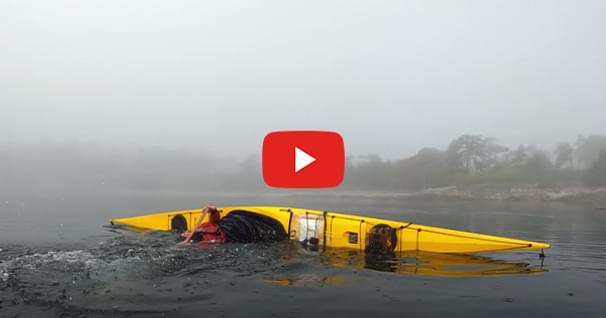 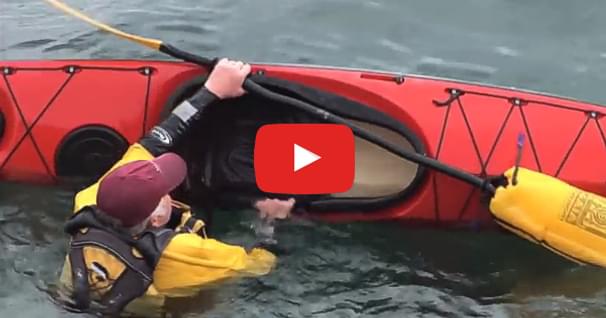 So when we're working towards the ultimate self-rescue, the re-enter and roll, we can use a paddle float…

The TX-Recovery, like the "T" or the "HI" recovery, is named for the configuration…