Sailing a canoe, the act of being propelled across a large lake or wide river, can be absolutely exhilarating, Not only are you increasing speed and distance, it's also a fun and relaxing way to get around out there.

Permanent sailing rigs can be built to match your canoe. Ray Goodwin's Canoeing book has an excellent guide. There's even sail rigs you can purchase. Wind Paddle Sails (pictured) make great light weight sails to pack on a trip. 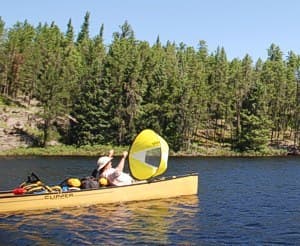 However, I prefer to create a make-shift sail, especially if I'm looking at being pushed downwind rather than zig-zagging your way against it. I've tried all sorts of designs, from the ends of a tarp attached to two extended paddles, to even a simple umbrella held out at the bow.

The best choice when crossing a significant piece of water is a rafted sail. A rafted sail consists of a two (or more) canoes lashed together and making use of a large tarp to catch the wind.

First, a medium-size log is used as a crosspiece. Both ends are tied on the thwarts and wood with a clove hitch. Wrap the rope around several times to make sure it's secure. You can use two logs instead of one, each tied at the back of each seat. This method seems more secure in heavy winds but it also doesn't allow the canoes to move independently. Make sure to tie a rope between the bows and sterns of the canoes.

Second is an A-frame made by two aluminum poles - stored by lashing them inside the canoe gunwale - or two long but sturdy pieces of wood foraged from the backwoods. They're criss-crossed ad lashed together at one end. To hold up the A-frame you lash the bottom ends to the bottom of the front seat - bow side - and use another pole to become the "yard," attaching it to the top of the a-frame and the centre of the cross log. Ropes can also be used rather than a pole, two tied from the top of the A-frame to the bows of the canoes and two tied to the sterns.

A simpler way to create a raft sail is to not tie in a crosspiece but just tie the canoes together. It's quicker, especially when you're not sure how long the wind will keep up. However, this design is much more prone to take in waves when conditions become rough. The world is divided into two great tribes: Tossers and Hoarders. (Brits won't have any trouble guessing…