One thing you can count on when you take up canoeing is that at some point you'll end up in the drink, clinging to your half-submerged craft. And none of us looks forward to the sometimes long swim; towing or pushing our canoe to shore. There's a reason canoe rolls were invented. But rolling isn't always possible. Therefore, it's a good idea to have a few canoe rescue skills up your sleeve. The canoe over canoe rescue is one such technique that you may need to know when you're in that situation.

A solo paddler or a tandem crew can perform this technique. Any gear from boats being rescued should be first handed to the rescue boat and stowed below gunwale lines. The rescue canoe then maneuvers so it is 90 degrees to the overturned craft. The paddler or paddlers of the dumped canoe should swim to the end of their canoe that is farthest away from the rescue canoe and push down to help break the suction. This facilitates the rescuer lifting the end of the overturned canoe up onto the gunwales of his canoe. At this point, the paddlers of the canoe being rescued should swim to opposite ends of the rescuer's canoe and hold on.

The rescuer (or rescuers in the case of a tandem crew) will now slide the canoe upside down across the gunwales amidships until it is centered. The canoe is then rolled upright and slid back into the water. The now empty canoe is brought alongside the rescuer canoe and the gunwales of both canoes are hand clamped while the victims crawl back in one at a time.

Canoe-over-canoe can be performed with two dumped canoes as well. The canoe to be emptied of water first is slid right-side up until it is centered over the submerged canoe, then flipped upside down to empty it.

The big difference is the first paddler getting back in the canoe. This is accomplished by a victim being on both sides of the empty canoe at the midsections. While one does a seal flop with hard flutter kick the other steadies the canoe. For people who don't have the strength to seal flop and flutter kick back into the canoe, a rescuer can put a sling with multiple loops over the grip of a paddle and hand clamp the shaft of the paddle at both gunwales. 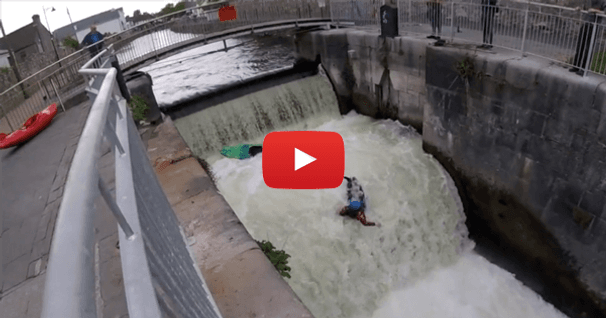 Whitewater kayaking can be intense and dangerous. Check out Kayak Session's winner for the best… 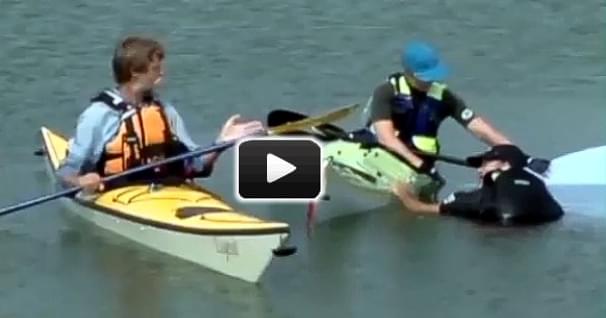 When we're doing a rescue in strong winds or in a current that's taking you away, especially if you're…