Can we talk? I need to vent. Back when I was guiding kayak day trips on Kodiak Island we'd stop for a lunch snack on a remote beach about two-thirds along the trip route. I'd lay out snacks and drinks on a section of beach that had huge, wave-deposited logs - ideal for benches and tables - a perfect stopping/eating/relieving beach.

Invariably the discussion initiated by non-Alaskan clients would be: "Gee, I sure would hate to be stuck or lost out here!" I'd reassure them that getting lost wasn't much of a concern and even in a situation where we were stuck (immobilizing injury, deteriorating weather, etc.) we'd be OK, even if the radio failed and we had to spend the night. That would raise concerns about not having a tent (or enough tents), not having enough food or water or even a fire.

I'd explain my training and confidence in basic wilderness survival skills and point out that we did, indeed, have fire in the form of several matches, lighters and alternative fire starts (I am a bit of a Mr. Gadget when outdoors). More often than not the conversation would ease a bit and then slip sideways into a campfire confessional by guests who'd admit they'd either never been camping, or had never started a fire outdoors (outside the BBQ grill) and that they wouldn't have a clue as to how to make it even one day on an isolated beach.

There needs to be basic "earth skills" or similar topics taught in schools! Oh sure there are the Boy Scouts and Girl Scouts for basic outdoor learning, but not everyone wants to join such groups. Some schools may not even have a student base with any opportunity to even enjoy the outdoors regularly. However, there still needs to be some basic courses, even part of Phys. Ed. if necessary to introduce people in how to cope on their own - even at the most basic level in the natural wild.

We need more dads - or moms - teaching their kids how to cope and enjoy the outdoors with minimal gear and create challenging situations that require them to think on their feet. Equally important in some cases, I'm sure it will be just as rewarding and educationally beneficial to have Boy Scout sons and Girl Scout daughters teach their parents as well.

Naturally not all adults and certainly not all youth want to have anything to do with the filthy, yucky, bug-infested, outdoors. What ways can we at least address the concerns and hope that we can be a mentor to at least a few in our audience.

Last winter came the sad story of a family who took the wrong road and ended up stranded in the mountain snows of Colorado. The story ended fatally for one member. I can't second guess, I can only encourage everyone to take every effort to broaden one's skills as much as possible, even if only to the point that it's a factor in their consciousness. You never know when those skills may be called up. After all, positive mental attitude is the best survival tool Mankind has.

The leisure, soft adventure types could be in a world of hurt if their luxury motor boat ran aground or if their SUV broke down ten miles up a dirt road at twilight. Why aren't their basic classes in "Outdoors Self Assertiveness 101" that are part of the curricula, maybe part of phys. ed. or health classes?

Granted, not everyone wants to become a Boy Scout or know how to be Grizzly Adam's camping partner. But the fact remains that there are certain skills that should be learned. It still costs money and endangers lives every time something critical happens to someone outdoors. Someone else is going to have to risk injury and money to bring them back to the safety arena. Why not develop at least a minimal insurance base by teaching everyone basic "earth skills" that just might come in handy some day, somewhere, for somebody?

Throughout my survival training, I've followed seven basic survival steps to outline a sequential plan for surviving. The key to the entire program is positive mental attitude, thinking through what your situation is and knowing what you need to do to mitigate it. The seven steps developed by survival experts work well as a foundation for a basic "Earth Skills" course for students of all ages and abilities.

Here's what my course outline would look like for such a class founded on basic survival techniques and applications:

This list could go on to include pre-trip planning, what to look for when selecting good equipment (something as simple as double stitched vs. single stiff, for example).

Lastly, how can we expand the course of basic, developed coordination skills beyond where many of our friends and family seem to be stuck today? I was watching my adult nephew feverishly embattled in a video game recently. As I watched I was doubly amazed at how sophisticated these games had become (I never advanced past 'Pong' at the campus bar I frequented as a student back in the medieval days of electronic "action" games.). I also realized how basic they still were. Newer, faster technology brought figures to life more, the backgrounds were more elaborate and animated, but basically it was either some primary figure blasting evil creatures with a laser, racing a car through an ever-changing roadway obstacle course or some cartoonish goon leaping and somersaulting from one moving platform to the next. My nephew's thumbs were tapping his control buttons in staccato-like bursts that would leave a speed typist in the dust.

I tried to think of all the positive "training" or skills he was developing out of this entertaining pastime in which he was so earnestly engaged. If he were an outdoors person, perhaps he could develop the same opposable thumb dexterity by applying the proper pressures on an open-faced reel thereby controlling its dispensing off the spool too fast. He'd be a master at avoiding a bird's nest snarl on his reel. That's something that is applicable in the real world - at least from a fisher person's perspective.

What about that eye-hand coordination that is touted as one of the positive aspects of video game skillsmanship? Might he accomplish the same thing if he took up fly-fishing? Developing a graceful and accurate underhand cast to lay a fly gently onto a pool underneath hanging alder branches on the far side of a trout stream seems like it could hone those same skills. And that manipulation of a figure as it anticipates moving platforms up and down the screen - vaulting from one secure perch to another. Sounds to me like someone navigating Class II rapids in a canoe? Maneuvering from pool to pool, eddy line to main current - avoiding rocks and sweepers - in a moving stream can't demand any less concentration and timing than getting Mario™ from one ascending foothold to another can it?

I've always said that if I were in a survival situation where I had to depend on fellow "survivors" for help, I'd rather be stuck with some high school kid brought up in 4-H or Boy Scouts than some mainstream video game expert. "I can't start a fire, but I can get to level ten on a Play Station " just ain't gonna cut it.

I know, I'm exaggerating. There are those who are totally able to make it as outdoors persons who happen to enjoy video gaming. And, while there may not be a game out there centered around catching a fish (oh, but there is!) or shooting a rapids, I'd at least feel better knowing that some kid took his/her game along (as I might a book) and at least chose the outdoors as his/her arena. 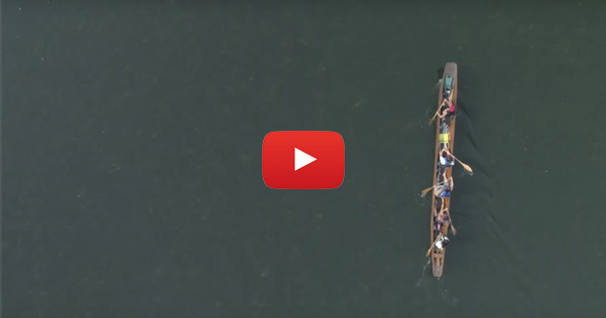