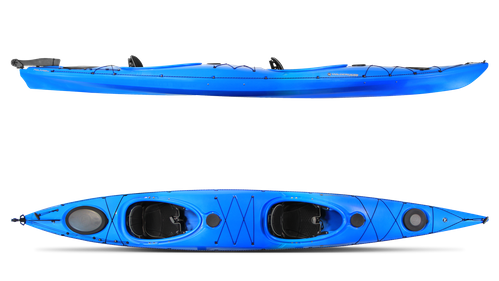 The Polaris 180T is a kayak brought to you by Wilderness Systems. Read Polaris 180T reviews or submit your own review to share with the paddling community. Check out a few other kayak recommendations below or explore all kayaks to find the perfect one for you!

Read and submit reviews for the Polaris 180T.

Read reviews for the Polaris 180T by Wilderness Systems as submitted by your fellow paddlers. All of the reviews are created and written by paddlers like you, so be sure to submit your own review and be part of the community!

Except for the weight, this…

Except for the weight, this is the double you've always wanted. Improving upon and shortening their older Northstar offering (see the name similarity?) by deleting the central storage compartment, the Polaris is slightly shorter, 10lbs lighter, more efficient and above all more comfortable than its predecessor.

You cannot deny the heavy weight. If you use your bail to keep the boat empty when you take it out of the water, and maybe take your gear out before carrying it into or out of the water or loading onto your car, two people of some (not necessarily a lot) of strength can do it with some difficulty. Being more fit and strong helps but not as much as you would like It's not an easy boat to carry but it can be done. This is really the only negative.

The best thing about this kayak is the comfort. With the new Airpro fibers and seat technology this might very well be the most comfortable set up I have ever had the pleasure to sit inside. Not only are the cushions extremely comfortable but the seat is adjustable in a multitude of directions. Gone are the days of your legs falling asleep, back aches, butt pain. I am quite fit but I find some kayaks just give me sciatica or leave various parts of my mid sections hurting; not here. It's like sitting on a very luxurious easy chair and you can melt hours away paddling without worrying about being uncomfortable. Welcome to the Lexus of kayaks!

The behavior of this kayak could best be described as heavy, stable and fast. It's neither quick nor playful, however if the other paddler knows what they are doing and is so motivated turns can be accomplished, as in most doubles, rather adeptly. You can turn on a dime but when this happens you lose all your momentum so you need to power out and that takes a bit. Given the weight and the plastic hull you feel a heaviness when paddling and that's the name of the game. It's not as crisp or as light as as a composite but the wind won't toss you around as much either. It is much nicer to use the rudder for trim but you don't need it.

The stability is very confidence inspiring. Given the weight and the width this is one of the few boats that I can get into without needing to brace with the paddle to the side if I am getting in from a beach where I don't want to launch or getting out when I don't want to beach the boat like on rocks or near a cliff. I never feel tippy in this boat and it is up there in terms of overall stability but the speed doesn't seem compromised and I think that a lot of the stability is due not only to some width at 29 inches, but also the weight so it's not necessarily a boat that trades a lot of stability for speed and it uses other factors while still using a reasonably fast hull. Race boat speeds you won't accomplish but thanks to its overall length two people can get quite a head of steam going without trying exceptionally hard.

Compared to 14 foot long singles the miles seem to melt away. Recently I paddled just over 8 miles in 2 1/2 hours but this was taking four, yes four stops at four different beaches for different reasons, either bathroom breaks, taking a drink, eating a snack or just wanting to check out the scenery. You can beat the current much better than with a shorter boat and its manners in waves are pretty stolid these qualities make a boat that from its comfort, to stability, to exceptional seakeeping works well in a longer journey, especially if you need the plastic durability to shrug off impacts with rocks.

The only problem is that the boat's length is such that it won't float over waves like a shorter one where you might put in a good two or three stroke burst to plane the hull on the way up preventing water splashing into you or getting a rough ride. Here in the Polaris the length makes it harder to cut through or float smoothly over the wave and you bang up and down. It's worse for the person in front who feels like they get airborne. You could take two singles in similar sea conditions for a smoother ride but then you won't be "beating the waves and current" as much. You pick your boat and paddle in it living with the consequences of your choice. I would say the longer journey you have in mind, the more the double has an advantage.

The fit and finish as well as quality of fittings is top notch. Not only are the seats the best I've ever experienced but you have "mini" storage compartments in front of the cockpits for things like tools, equipment, radios, navigation aids or even drinks. The compartments are just large enough to fit all of these at once! The rigging is nice too as are the handles, and the rudder works well and is easy to raise and lower. 20 years later all the acoutrements have benefitted from more advanced technology vs the Northstar so while the money seems expensive, you're getting a very nice boat.

Compared to our Stellar ST17 which is a composite double of similar size it's less playful. The composite is a bit faster, more responsive, certainly more efficient but it's upset by wind more whereas the Polaris has a more sedate demeanor. This is not a bad thing. If I am paddling with my kids who are very attentive to heading and correct for wind and current well it's not a big deal but if your other paddler doesn't want to pay that much attention the extra weight, stability and less responsiveness can work in your favor.

The fact that this boat is of a certain length also lowers the "divorce boat" potential though the Stellar ST17, being 5" shorter than the Polaris is a bit in that direction but so is the Polaris, just not as bad. The problem here is the Polaris is 8" shoter than the boat it replaced and those 8" were in between the two paddles with an extra storage compartment so with that one hitting each others' paddles was impossible. Here it can happen so while you don't have to be perfectly coordinated if the stern paddler is not paying attention you will have mild problems. Not quite divorce boat territory indeed but something to pay at least a little bit of attention to. Put the more passionate, "in control" paddler in the back who keeps an eye on these things and the more mellow person in the front who cares less and it will all be fine.

A note about paddling this boat alone, it can be done. When the kids were smaller we wouldn't even give them a paddle and my wife and I would take the Polaris and Northstar each with a kid in front (we have two). The going is slower but with an adult and kid in the double, and an adult paddling a single alone, the double, even though we did it long before we could trust the kids with paddles, was always faster. So this boat is more tiring to paddle alone, but can be used this way if a vehicle to take a family member who is unable to paddle such as a younger child. It just costs you more energy and you won't go as far but you'll still be faster than a single; it will just take more energy but for a slight effort increase you'll go significantly farther.

Overall I love our Wilderness Polaris. It's a comfortable, stable, fast and easy to use kayak that can cover a lot of ground and take a beating on the rocks. I love the seats, I adore its forgiving nature but I just wish it wasn't as heavy. This is a good boat for families for example to stick a child in the front, or for couples that want a craft to enjoy the water that can withstand impacts. It's not maneuverable enough for white water but its seakeeping is good enough to allow it to paddle just about anywhere else other than rapids where one would wish to paddle. It's a step up from its predecessor, the Wilderness Northstar which we also have in every way save the loss of the central storage compartment if you're going on an expedition and need to bring that extra amount of gear. If you are willing to lug around an 85lb boat which is just about the limit of what two people can reasonably do well, there really are no other drawbacks .

It's a niche boat as plastic tandems have faded given the weight but if people would look past that it's not that bad. Things like trailers which are not that expensive really help, Trailex makes some very inexpensive models that cost less than the difference between the Polaris and a composite or more light weight double.

I give this boat 5 stars as there is nothing I would change about it; the only way to improve on certain things like the weight would mean going to a lighter, and less durable material which would prevent it from being our go to boat for paddling off the rocky beach behind our house. Having cut weight, improved build quality I think Wilderness systems is doing just about the best they can with plastic, and it shows as the Polaris is the peak of the pannicle when it comes to rotomolded tandems. If you're in the market for a plastic double in the interest of durability or keeping costs down, or are looking for a more family friendly boat where you can keep a younger one up front the Polaris is a fantastic choice. Thank you Wilderness Systems, I love your update to the Northstar. I hope you keep making plastic doubles as magnificent as your Polaris.