by  The Folding Boat Company 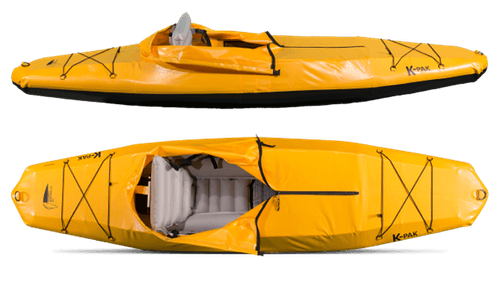 The K-PAK Folding Boat offers hassle free access to the water, anywhere to do most anything. Weighing just 21lbs, this portable boat fits neatly into a comfortable backpack, allowing you to take it on any adventure. When you're ready to paddle, simply assemble your boat in minutes. User friendly and super durable, the K-PAK will provide hours of fun on the water, whether it's simply paddling with the family, or fishing with friends. Unfold your next adventure.

Read reviews for the K-Pak by The Folding Boat Company as submitted by your fellow paddlers. All of the reviews are created and written by paddlers like you, so be sure to submit your own review and be part of the community!

THIS PRODUCT IS AWFUL. Can’t…

THIS PRODUCT IS AWFUL. Can’t believe I wasted my money on the K-Pak. It started deflating on me after the first use.

We bought two as my wife and I just don’t sync up well in a tandem. We live near the Chesapeake Bay and spend winters in Florida. We wanted kayaks that were easy to transport back and forth and that would perform well in both the Bay and Gulf and the tributaries of both. All of the videos on the Folding Boat website show paddling on a serene lake or river. We were very concerned about how the kayaks would be in waters with more waves and more current. As athletic energetic retirees, we are not interested in white water type kayaking through rapids, but the waters that we are on definitely are more challenging than the serene bodies portrayed. What we found is that the boats are indeed fairly easy to transport and set-up. Once in the water, they do feel somewhat “tank like” compared to a hard shell kayak. Nevertheless, we had no trouble with waves or current. What we did have trouble with was tracking. It seemed that every stroke turned the kayak more than what one would expect and it felt as if half of the energy was expended on trying to hold a straight line as opposed to steadily moving forward. Our daughter, who works full time in Outdoor Rec and does a lot of kayaking offered that the weight distribution of the boat caused the difficulty of control. She suggested adding weight in the nose to provide more stability, with orange juice jugs filled with sand. We tried this and the boats performed a little better, but then of course, you have to pull more weight with every stroke and it is questionable if the marginal improvement in tracking justifies the extra weight.

The other issue is the horribly inferior backpacks. When our kayaks first arrived, one of the backpacks was found to have a rip. Folding Boat did replace it. At that time, Pete (who I believe is the Owner of the company) acknowledged that the backpacks had been poorly made. Exactly! By the 4th use, both backpacks had rips on the corners and long strings hanging on the inside of the backpack. The things were literally falling apart. Pete admitted again that the backpacks are of inferior construction and advised that he has a few better quality backpacks made by a different provider. What more acknowledgement does one need to validate the inferiority of the original product??? After the 2nd use in Florida (making a total 6 times utilized), with the backpacks now only somewhat usable, I again contacted Pete. The boats are so tight in the backpack my suggestion was to simply make the backpacks a bit larger. When I said that in the conversation he thus concluded that we had been folding the boats wrong when we finished our outing.

Our kayaks came with a 3 year warranty, which included parts and accessories. Apparently, this warranty is invalidated if the Owner comes to believe that the poor product is the customers fault. I was in business successfully for myself for 44 years allowing my retirement at age 60. Blame the customer was never the right answer when a problem occurred. It was “how do I make this right for you?” Instead, Pete told us the best he could do is sell us the new better backpacks at a cost of $40 each. In the spirit of cooperation, I offered to buy one if he would comp the other. He said no. He made reference to a paper that was supposed to have been in our original shipment with the kayaks and the damaged backpack. This paper purportedly gave take down instructions. I searched high and low with and cannot locate such a paper, nor do I recall having received one. The set-up pamphlet that came with boats did devote one line in the section for take down. It basically said “reverse procedure”. I do not believe we received any other paper. Considering that they put a damaged backpack in the original shipment, I am not sure that there is a QC control on shipping to make sure that all is well and complete when the box is closed for shipment. My career was in Transportation and Logistics. I’ve spent a lot of time in Shipping Depts of my clients. This is Shipping 101 but I have no confidence that such procedures are in place at Folding Boat Co.

As Pete had someone in his employ solicit feedback and reviews shortly after purchase, I thought I would allow him last opportunity to make this right. He reiterated his “offer” to sell me 2 new backpacks, accused me of threatening him and told me do whatever I had to do with respect to posting a review. So here I am and coming full circle to that question that I opened with. If I had it to do again…I’d buy a roof rack and 2 hard shell kayaks and have money left over and a lot less aggravation.

Test paddled a K-Pak by The…

Submitted by: paddler236585 on 11/5/2015
Test paddled a K-Pak by The Folding Boat Co at Overland Expo East in Asheville, NC, and was instantly sold. It's the perfect solution for our campervan given the boat's profile and packability.

The K-Pak is a polyurethane fabric boat that achieves rigidity through an aluminum frame and inflatable tubes that run the length of the vessel. The boat runs 9'3" long and sits 30" wide when ready to paddle. On the water, the boat is nimble and relatively fast. I was able to maintain 2.5 mph on flat water with ease (despite the presence of a stiff wind).

The K-Pak weighs a mere 21 pounds and folds into a compact package. It fits nicely into the back of our campervan while leaving ample room for the rest of the gear we usually carry. The simple design also allows for a set up/break down time of 5 mins. That was the big selling factor for us.

My son had 4 days for Spring…

Submitted by: guest-paddler on 4/3/2014
My son had 4 days for Spring Break in the Florida Keys. The K-Pak provided the perfect boat to pack in all we wanted to do. Because it is light weight, compact, and fits in a backpack we were able to carry them with us on the plane and then throw them in the trunk of the rental car. Because it is so easy to assemble, we were able to paddle the Everglades for 3 hours one morning before most people had loaded/unloaded and prepared to launch their boats.

Assembly and dis-assembly take about 5 minutes start to finish. We would see a spot off the highway, park, assemble and launch in no time. We would visit three different places a day with ease allowing us to fish more places and see more things than had we done it any other way. It really made out vacation and now we are using them all over.
Thanks K-Pak!

K-Pak
by The Folding Boat Company
Submit Your Review