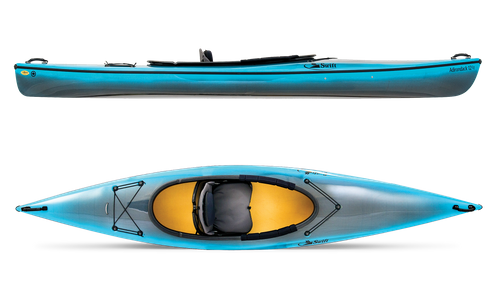 The Adirondack 12LT is a kayak brought to you by Swift Canoe & Kayak. Read Adirondack 12LT reviews or submit your own review to share with the paddling community. Check out a few other kayak recommendations below or explore all kayaks to find the perfect one for you!

Read and submit reviews for the Adirondack 12LT.

Read reviews for the Adirondack 12LT by Swift Canoe & Kayak as submitted by your fellow paddlers. All of the reviews are created and written by paddlers like you, so be sure to submit your own review and be part of the community!

Ours is a kevlar without gel…

Submitted by: paddler234170 on 7/27/2011
Ours is a kevlar without gel coat. It is stored indoors (theft protection) and therefore damage from lack of pigment seemed less of a concern. We liked the looks and reduced weight of a gelcoat-less boat. No second thoughts with that decision.

The boat is definitely our "go to" boat on our lake. The light weight, comfort, classy looks and fine handling combine to make a difference. For an inland lake it paddles and performs beautifully. I have come to the conclusion (perhaps from experience with this boat) that for most paddling where people simply can't sustain a high hull speed, waterline length is really immaterial. We have several canoes and kayaks ... and this is the one everyone chooses to paddle.

After three years with this boat, we are selling the others and reducing the fleet to the lightest Adirondacks we can afford. The one drawback is the theft potential, it has to be put inside. Good news is that the light weight makes that easy. Price aside, this is a wonderful product.

My kayak was damaged while…

Submitted by: paddler233355 on 10/26/2009
My kayak was damaged while being trailered on kayak trailer over 16 mile washboard road. The front was gouged by by the trailer's steel frame and the back was abraded by a loose buckle. The CEO of Swift picked up the kayak at Mountain Man Outdoor Supply in New York while attending a rendezvous. He brought it to the factory in Ontario, CA. It is being sent back to the outfitters in Nov. The charge for repair was very reasonable. The cost of transportation was FREE! Their communication and responsiveness was just great.

I will definitely recommend this company's products to my friends and anyone who asks about my boat... very happy customer. And I wish to recommend Mountain Man Outdoor Supply in Old Forge, NY for their cooperation and helpfulness in this process.

I just bought my Adirondack…

Submitted by: paddler233355 on 9/8/2009
I just bought my Adirondack 12LT by Swift. I love it! I have canoed and kayaked with different boats but this one really is great! It is light (26 lbs,) sleek, very quick responsiveness, and has a wonderful roomy cockpit.It is very stable for photo taking, or fishing. The wind seems to run over it instead of pushing it around and it easy to paddle, gliding along quite effortlessly for the size of the kayak. I use it on small lakes, fast rivers (not whitewater)and marshy areas. It is a great boat. I think Swift has the market on this kind of design for folks that want light, stable, sleek and lots of comfort.
5

Our primary considerations in…

Submitted by: guest-paddler on 10/27/2004
Our primary considerations in a kayak were light weight, stability, relatively large cockpit, and suitability for recreational use on flat, relatively still water. We ideally wanted something that would work for a 10 year old child, a 5'7" woman, and a 6'5" man.

We bought a 12' Swift Adirondack this fall during an end-of-season sale and have had the boat out a few times since then. The kayak was originally meant for our ten year old son who was getting bored just riding in our tandem canoe, but Mom has used it more than he has! The boat is very lightweight. My son can carry it by himself, and Mom can load it on the minivan herself. The boat is very stable and seems quite fast for its length. We also tried the 13'6" version of the boat but it seemed tippier, and it was noticeably heavier. So far we've used it on small ponds and on the Erie Canal, but next year we intend to use it on smaller lakes in the Adirondacks.

The kayak we bought has a highback seat and a sealed hatch behind the paddler. The seat is very comfortable. We also like the large cockpit (maybe because we are used to canoes).

I'd recommend this canoe for family recreational use. It's a delight to paddle.

I purchased my Swift…

Submitted by: guest-paddler on 6/17/2002
I purchased my Swift Adirondack 12 kayak on June 7, 2002 from Baycreek Paddling Ctr in Rochester, NY after trying out a number of kayaks at various places. I also own a Perception Caspia rec boat which I've used for 4 years. I wanted a longer, lighter, sleeker rec boat, but I did not want to give up cockpit size. I have used this boat 5 times in all types of water and it performs very well. It is 12'2" long and 27 1/2" wide and made of goldenglass and weighs just 34 lbs. The cockpit is 19" x 50 1/2" and the seat is comfortable. It tracks pretty well and is faster than my Caspia poly boat. The fit and finish is excellent for a boat that costs less than $1175. This is a stable, sleek, and good performing quality boat with plenty of room. It is made in Canada and I am sure Swift will be selling many of these boats.
5

Submitted by: paddler229399 on 8/9/2001
27.5 wide and 34 lbs. Smooth hull, glass material and very stable. This boat is usually two toned, but can be a solid color if you ask (mine is RED). The weight is critical for a woman alone and 50 years old and getting older. I wanted to have a boat I could use for a long time. The people at Swift worked with me on this and pared as much weight off as they could. They were very accomidating and helpful. I use the boat for recreational use and taking the dog for a ride (she rides between my legs in the wide cockpit and she weighs an additional 35 lbs). I also use it to get into small places and take pictures. The boat makes a very stable platform for my camera. I was wonderfully pleased both with the boat and the company and give them high praise for design and customer service. I live in Rochester NY and they are in Canada up by Algonquin Park the delivery and communication was great. In addition the boat is a light, fast comfortable and very responsive in the water. It takes very little effort to paddle and turn. I would recommend this boat for anyone, especially when the weight of the boat is a concern and you are a solo paddler wanting the freedom of going when you want.
Adirondack 12LT
by Swift Canoe & Kayak
Submit Your Review