The Sojourn 126 is a day touring kayak for smaller paddlers who like performance in a nifty little package. At 12 feet 6 inches long and only 43 lbs, this sleek little beauty is blast to paddle and a pleasure to carry. It's also super comfy thanks to its Airestream seat system and adjustable thigh braces, and its 24-inch beam offers plenty of stability without sacrificing the option to carve and edge. Best of all, this little beauty is offered in a variety of beautiful colors.

Read and submit reviews for the Sojourn 126.

Read reviews for the Sojourn 126 by Hurricane Kayaks as submitted by your fellow paddlers. All of the reviews are created and written by paddlers like you, so be sure to submit your own review and be part of the community!

I just purchased a NOS (new…

I just purchased a NOS (new old stock) 126. It's born date was sometime in 2014 and invoiced to the dealer's shop in 2015. It had some shop rash from being moved around in the shop and traces of being demo'd which I found normal for a boat sitting in the dealership for approximately 3 years. THE BAD NEWS; I took her out today and had a relaxing time, Nice boat, great lines, not the greatest tracker at 12'6 but nice never the less, As a relatively newbie, I took the dealer's advice ad later today I rinsed her off and gave her a nice coat of wax. I also used a little medium cut cleaner (Maguires) which is a extremely soft compound, for scratches and stains, from being moved around in the shop for three years. Then, the coat of wax brought out the newness that wasn't completely there when purchased also. As I am polishing her up, on the hull, I discover abnormalities in the surface. The most glaring was a slightly raised perpendicular raised area. I realized it was directly beneath the rear bulkhead. I know a little about manufacturing and it only makes sense that when hurricane employees put the bulkhead piece in place and epoxied it in place they used too much pressure to hold it in place, OR, the tooling extended a few inches to far beyond the actual bulkhead. Epoxy heats as it cures, so a possible deformation can exist if too much hardener, thus a little too much heat. The other possibility was the actual bulkhead piece, it's self was a little on the large side, only on half of the hull and with pressure, combined with heat, raised that small part of the hull perhaps a 1/64 to a 1/32 in a perpendicular line, 90 degrees to the length. I also found two dimples in the hull as well. Obviously, someone wasn't minding the ship that day and the bottom line is they have manufacturing problems, or did that year. It makes you wonder if this is one of the reasons the boat doesn't track beautifully, like it should for this type of $. I have a keen eye and I sometimes see things for more than they are, but these are real issues. I will make some calls to Hurricane and the dealer tomorrow to see about an exchange. Almost forgot; as I polishing, I found some potential, if not real stress cracks. They looked like scratches at first but when I put pressure on the area, it appeared to open ever so slightly. The dealer said, on another boat I walked away from, that that was just in the surface finish. These boats do not have significant application of hardener like a gel coat used as the final surface, as fiberglass boats do, so this leads me to believe again, a manufacturing issue could have been the problem then, or now? I am not totally blaming Hurricane but I see some obvious manufacturing and quality control problems. I love the style and looks and wish I didn't have to bad mouth about my boat. Sometimes you don't see things until you get the product home. If you think I am overboard about Quality Control, I picked out another 126 kayak with a different color 126 but when we go it off the rack I asked about the serial number. It was never engraved! We searched High and low for ten minutes and never found it, so I refused that boat and chose the other! An afterthought; If this kayak was demo'd, which I think it was because of scratches in the bow, I shouldn't have had to paid "New". I liked the dealer and for a boat being new it was a fair price. Don't go into something like this with starry eyes.

I bought this kayak 2 years…

I bought this kayak 2 years ago. It was my first kayak purchase. I am petite and middle aged so I was looking for a lighter weight, smaller kayak that I could carry and lift onto my car . This one came in a lovely shade of purple too (love love!). Also, I am a lake paddler/camper so I didn't anything too complicated. Overall, I love my kayak. It is a perfect fit for my size, seat is comfortable. Stability is good and it can carry a lot of camping gear. The only issue I have is that it doesn't track well. Now, I understand that could be the weight distribution of my gear or possibly my novice paddling style but I wonder still if it is me or the boat... That being said I like my boat so much I would buy another Hurricane kayak. 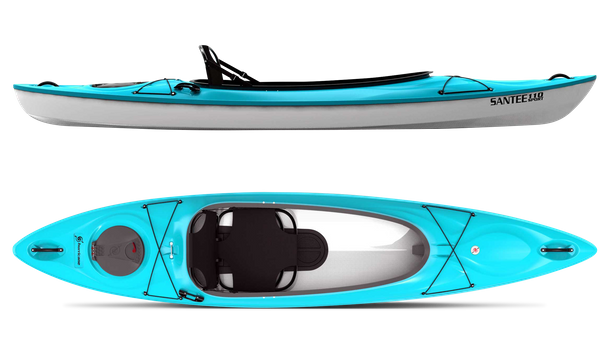 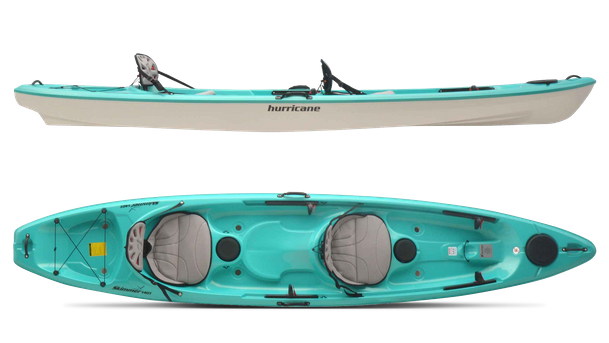