Read and submit reviews for the AB30 4 part paddle.

Read reviews for the AB30 4 part paddle by Sea Eagle Inflatables as submitted by your fellow paddlers. All of the reviews are created and written by paddlers like you, so be sure to submit your own review and be part of the community!

These are the "standard"…

Submitted by: jamoaque on 7/31/2015
These are the "standard" aluminum-shafted paddles (239 cm) that come with most of Sea Eagle's kayaks. Overall, these are decent paddles as far as performance and feel/handling. The blades are very stiff. The main potential drawback with these paddles is that the through-holes on the base part of the blade piece where the spring-loaded buttons go through can wear off a bit and become too large – then the metal button can slip through, so you can't use the paddle anymore (unless you wrap a piece of black tape around to keep the button from sliding out). If this doesn't happen though, one benefit of the 4-piece style of paddle is that they break down smaller so you can travel more easily with them, even within a suitcase.

As far as portability though, they could improve how short of pieces it can be broken down into; when flying w/ them, the longest pieces of the paddles just barely fit diagonally into our largest suitcase. (Maybe there would be some way those longest pieces could be taken on a plane as that one extra thing you can carry on with you, like a musical instrument, etc.) But what Sea Eagle could do is put a couple more inches of length onto the base shaft-like portion of the blade pieces and in turn shorten the two aluminum pieces also each a couple inches – this would improve its minimum break-down length while maintaining its overall length. If they made the button and length improvements, I would bump up the rating as an economical, basic paddle.

Something that I found helpful if you are running into the same kind of push-button issue I have been with the AB30 paddles: On the base "nose" of the blade, there is a through-hole that allows the spring-loaded metal "button" to stick out. Too often, the inside diameter of that hole wears off enough that the metal button starts to work its way through the hole (instead of the bottom lip of the button catching it at the bottom of the hole and holding it there). First, the button gets jammed firmly part-way through the hole, sometimes so hard that you can’t get it pushed back out without a pliers. Then by the time you break the thing free, the inside of that hole may be worn open enough that the button can then slide all the way through. When I measured the metal buttons, I can see why this happens: the tiny lip at the bottom of the metal button is only about 0.3 mm wide, so the through-hole doesn’t have to wear much for the button to start to slip through.

There is one fix which may get us by until Sea Eagle provides us with improved buttons. I have implemented this on several of my blades that had this issue so I can get some paddling time on it this season:
1) take out the spring-loaded button mechanism (you need to reach in the end of the blade nose with a needle-nose pliers and push the button down with something else as you pull out the spring mechanism)
2) slip a 5/16-inch external retaining ring over the rounded end of the button and slide it down until it rests on that tiny lip (you need a retaining ring pliers for this)
3) re-insert the whole mechanism so the button pops up through the hole again. The retaining ring keeps the button from slipping through the hole now, but it does reduce how far through the button can go – it appears to still go through the hole just enough to hold the paddle shaft to the blade.

I plan to give Sea Eagle feedback on this issue; if you have had this issue, please let Sea Eagle know so they can appreciate the value of improving this button feature. Also let me know if you have any bright ideas. Maybe by now they have increased the width of that little lip from 0.3 to 0.6 mm or such like at least for new paddles, which would likely keep the button from slipping through. 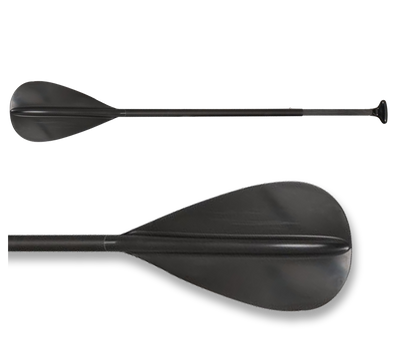