The POP Cart is a accessory brought to you by Paddleboy. Read POP Cart reviews or submit your own review to share with the paddling community. Check out a few other accessory recommendations below or explore all accessories to find the perfect one for you!

Read and submit reviews for the POP Cart.

Read reviews for the POP Cart by Paddleboy as submitted by your fellow paddlers. All of the reviews are created and written by paddlers like you, so be sure to submit your own review and be part of the community!

I have owned my cart for…

Submitted by: paddler231773 on 8/31/2006
I have owned my cart for about 5 years, and I hate it. I gave up using it entirely after about 6 months, because it was easier just to carry my yak. I pulled it out to try it again recently, and...yup, it still sucks. All the problems described by others apply to me, compounded by the fact that I launch before light so it is even harder to get it on properly. I suppose you get what you pay for.
2

Yes, it doesn't cost as much…

Submitted by: guest-paddler on 8/16/2004
Yes, it doesn't cost as much as some of the other out there, but I wish I would have gone ahead and spent the extra money. I have a difficult time getting my boat on it. It won't work on the back of the boat, I have to move it toward the center to give the strap something to hold onto. Then it tips over. It's almost easier just to carry my 80 pound boat than to try to use this thing.
4

It is easy to have a problem…

Submitted by: Peter_K on 7/18/2003
It is easy to have a problem with this thing. The first time you assemble this, you have to really concentrate on the angles of the holes and such because the pieces are made asymmetrically. If you get it right the forces tend to spread the bars out. Then lable it for quick reassembly, Sharpie marker works well. I've had no problems with mine. Yes you have to anchor it against something, In front of a hatch lip or something but it has been OK with me, Not for rough terrain. I've turned it over a couple of times. PVC tube in the center is a great idea!!! My rating of 8 incorporates the fact that it is 1/2 the price of many carts.
3

Ohhhh…I got so mad at this…

Submitted by: guest-paddler on 10/1/2002
Ohhhh…I got so mad at this thing!!! The POP/Cart was a REAL disappointment and here is why. First off, in order for it to not slip off your boat (or for your boat to not slip out of it) you must bind it on pretty close to the center, or at least until you can give it something to hold on to (in my case a seat-back). Once I achieved that and began rolling towards water I found that the wheels wanted to slide across their axel towards the center, which resulted in the boat constantly tipping over!

The design is just awful…but here is my solution for any of you who have purchased one and are now not able to return it because it’s all scratched up from all that “tipping”. What I did was buy some narrow PVC piping, remove the wheels then run the axel through the (cut to fix) PVC. Once you’ve reattached the wheels the PVC will prevent them from sliding together. It’s not perfect, and it defiantly doesn’t seem fair that after shelling out $50.00 you have to re-tool this thing, but it’s better than spending the cash and then not being able to use it at all. 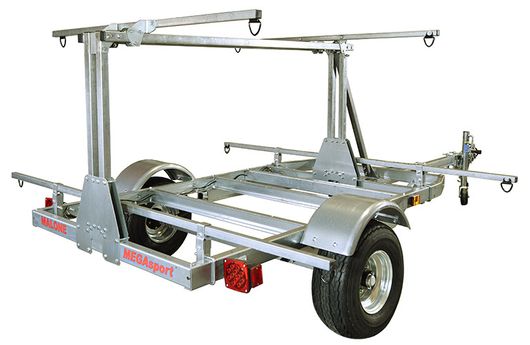