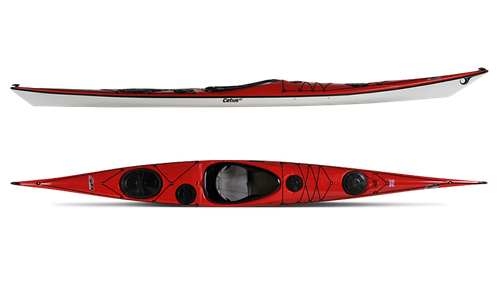 The Cetus 176 LV is a kayak brought to you by P&H Sea Kayaks. Read Cetus 176 LV reviews or submit your own review to share with the paddling community. Check out a few other kayak recommendations below or explore all kayaks to find the perfect one for you!

Read and submit reviews for the Cetus 176 LV.

Read reviews for the Cetus 176 LV by P&H Sea Kayaks as submitted by your fellow paddlers. All of the reviews are created and written by paddlers like you, so be sure to submit your own review and be part of the community!

I was in love with my Cetus…

Submitted by: paddler770769 on 5/9/2020
I was in love with my Cetus LV by P&H from our first day on the water. She easily packs a hundred pounds of food and gear for a 23-day solo wilderness journey. When I die just tuck me into the cockpit and fiberglass the opening.
5

Submitted by: Kmesmer on 4/28/2020
I bought a Cetus LV two years ago after having a Current Designs Squall (7 years) and then a NDK Romany (12 years). The Cetus fixed all the problems that I had with those boats. It tracks well and the skeg system has worked flawlessly. I am able to paddle into headwinds and keep up with others. The hatches do not leak. I have difficulty finding a sea kayak to fit since I am less than 5 feet tall, but the Cetus is perfect for me. I have done week long trips on Lake Superior and have been able to fit everything that I need into the hatches. I also do day trips on smaller lakes and larger rivers near my home. I love my Cetus LV!
5

I have owned a PH Cetus for 2…

I have owned a PH Cetus for 2 years now and have never been disappointed. I try to get out every other day on local reservoirs and Lake Erie. Initial and final stability are quite good for this type of kayak. It carves quite well and is easy to keep a 5 mph pace for several hours on flat water. The skeg system is simple and easy to deploy, Its low profile allows it to shed a light breeze with little need of corrective strokes. I would gave this boat a 5 star rating and look forward to many more years of paddling.

Submitted by: kayakmo on 7/1/2015
I am 5 foot 1 inch female and recently started sea kayaking. I have had my Cetus LV for around 6 months. This boat looks amazing and felt a great fit from the start. I was looking for a very stable boat and have never had any concerns even in big swell and waves. It is also fast enough for me to keep up with more experienced paddlers. It moves beautifully through the water and feels graceful. It is light enough for me to lift onto the car (with some help) and overall has been a source of great joy.
4

I've had my Cetus LV for…

Submitted by: waltmyers on 9/17/2013
I've had my Cetus LV for about 4 years now, and I love it. I'm 5'7" and ~160 pounds. There are times when touring that I wonder if the MV would be a better fit but the MV was not an option when I bought the LV. Having said that, even loaded with gear and in some large waves, I've so far been keeping the cockpit upright.

The boat paddles well, maintains speed, and yet still turns very nicely. The original skeg design was disappointing, but I've had the redesign installed and it works much better. I had the boat built with a shorter cockpit and use foam to rest my feet on the bulkhead rather than having foot pegs. This gives me more storage in the bow hatch, and flexibility with my foot placement. I do wish the hatches were drier. My former Impex seemed much more watertight, and the skeg was never an issue.

All in all, I am very glad that I upgraded to the Cetus LV.

I've had my Cetus LV for…

Submitted by: KathyWilliams on 7/25/2013
I've had my Cetus LV for three years, but hope it lasts forever! I'm 5'3" and 145 lbs., so the low volume fits me very well. I have adjusted the seat some and now use Sweet Cheeks with it and a blow up thigh brace. This boat manages waves, edging, and high winds with ease. I also love the 4 hatches, so the closest two are accessible while paddling.
4

Got to demo the Cetus LV and…

Submitted by: guest-paddler on 4/20/2011
Got to demo the Cetus LV and MV last weekend at the Port Angeles Kayak Symposium. I weigh 165 lbs, 5'8" tall, size 33 waist, and consider myself an advanced beginner - mostly exercise paddles, plus day touring with friends. But I'm also looking for a boat that can handle some tripping if I pack light and reasonably maneuverable - an "all around" boat.

I agree with most of what Douglas Wilcox had to say about the LV in his excellent extended review. This boat just feels refined and elegant in the water to me. It turns very nicely when edged with a nice gurgle sound when the keel kicks loose. While its no Romany or Chatham 17, the LV carved graceful turns through a line of old dock pylons. The LV also had Excellent build quality, and I like the seat, forward day hatch and all the available options with the LV.

The LV had zero weathercocking in 15 kt winds (0.5 mile fetch) both quartering to the bow and at 90 degrees. In quartaring winds on following seas, there was slight weathercocking which I could eliminate with partial deployment of the skeg. Deployment beyond half way was too much skeg in these conditions.

Initial stability was just fine, even coming from a 24" boat, and the LV cuts cleanly through oncoming waves. The thigh braces were not very aggressive to me, but fine for easy rolling and leaning. The fit was a little more snug than the MV, but I like the extra degree of sportiness of the LV vs. the MV.

The LV feels perfect if I will never do more than a light-weight 2 or 3 night trip with it. The MV is a little more roomy and the added 20 lbs in it's recommended weight range would allow more gear for extended trips, though.

Boats I tested before…

Submitted by: GilH on 11/3/2010
Boats I tested before purchasing the Cetus LV: I tested the Quest LV, The Explorer LV, Tiderace Xcite S and Tempest 16.5 pro.

I was looking for a boat with the agility of my Romany and the speed of my Nordkapp. Of course, I knew I was going to find a boat that met half way between those features. After testing all of the boats in previously listed, I ended up with the Cetus LV. I may have liked to have tried the Cetus MV, but it was not available at the price I found the Cetus LV, which was a demo boat. I purchased the boat after Russell, from Sweetwater Kayaks recommended the boat. I wanted a boat larger than my Romany with more speed to be used as a day boat.

The Quest LV was a nice boat, but a tad on the large size. Nice boat but I could not lay back on the deck. The Explorer LV was a tad too tight. The Tempest was nice, real nice but I wanted something a little longer. The Xcite was almost as tight as the Explorer. I found the boat fantastic. Great speed. Turns well and rolls very, very easy. By the way, I am just over 5'8", 170 pounds which is almost too big for the boat.

I loaded the boat with a first aide, change of shirt and pants, towel and a couple of water bottles. PFD, skirt and camera and I may have had 15-20 pounds spread throughout the front and back bulkheads. You can see half the name of the boat coming out of the water. Not too far sunk. I did not feel too tight in the boat, but I would not like to gain 10 pounds.

I guess I could give this boat a 10 if I was under 160 pounds. Bottom line, this is GREAT boat.