Read and submit reviews for the Sylva.

Read reviews for the Sylva by Liquidlogic Kayaks as submitted by your fellow paddlers. All of the reviews are created and written by paddlers like you, so be sure to submit your own review and be part of the community!

Very good kayak. Not for…

Submitted by: guest-paddler on 3/17/2014
Very good kayak. Not for novice paddlers though, as it is tippy. It tracks amazing and cuts through the water with precision and speed. Every time I let novice paddling friends use this kayak in small to medium rivers, at some point during the trip they would tip this yak over and end up in the drink. But, for you critics out there, I realize this is NOT a recreational kayak, it's a sea kayak. If you want to relax on a lake or river, get a Wilderness Pungo or similar...
4

After an exhaustive online…

Submitted by: psherman on 10/24/2004
After an exhaustive online search for the right kayak for a smaller paddler (female, 5'2), I decided to go with the Sylva. I do not have easy access to a variety of kayaks to demo and did not want to limit myself to what was available to try in person, so this was ordered sight unseen. I bought this based on length, width, weight, price, and brand. My other kayak is a Hurricane Santee XL--an excellent kayak but at 11'6" and 28" wide, it didn't have the speed I wanted for those day trips when I want to cover as much distance as possible. Ninety-five percent of my paddling is on calm rivers with little current, the rest on calm inland lakes. For this reason, and since I rarely go out in windy conditions, I purchased my Sylva without the rudder option.

The Sylva is 14'1" long and 22.5" wide, quite different from my Santee. It weighs 49 lbs, which is the upper limit of what I can load and unload (I carry it *inside* the car (a Honda CR-V) rather than on a roof rack, which makes it much easier to load and unload, but I still have to get it from the car to the water). My first trip with it was to a nearby river where you put in at the headspring, at a boat ramp in shallow water with a hard sandy bottom. It was a little trickier to get into gracefully than the wider Santee, but not a problem and I'm sure I will perfect my technique over time. I spent a fair amount of time in water a foot deep just rocking back and forth to get a feel for the secondary stability, which kicked in when it was far to the side. I did not attempt to take it all the way to capsize since I did not feel like getting wet that day. It seemed unlikely, based on my experiments, that conditions at my paddling sites would ever force it over far enough to capsize. I practiced getting out, and it was extremely stable during that maneuver.

So I left the ramp and headed out into the river. It took me about 5 minutes to adjust to the stability of the new narrow width, and I was aware of it only while gliding--it seemed extremely stable while paddling. And I finally learned what tracking really is! The bow did not have any side-to-side wiggle with my strokes, just kept pointing straight ahead.

I practiced small turns of the sort to avoid logs or clumps of aquatic plants. It was very responsive to both leaning turns and ruddering using the paddle. Turning 180 degrees was a little more difficult in the Sylva than the Santee, but that's a function of its length, and possibly the chines, and an expected trade-off. It doesn't spin on a dime but it also is not overly tedious to turn around. Also, I was turning against the current and against the wind, less than ideal turning conditions.

The seat ratchets easily into position while you are paddling. The cockpit is shallow and since I am short, the seat back, which of course comes to the top of the cockpit, hits me between the ribs and hipbones, a soft area that was not overly comfortable. This would be the case with any kayak of this depth, and was easily remedied by adding a higher cushion behind my back. If I was taller than 5'2, I would be leaning back on my hipbone area and it would be more comfortable. The footrests were easy to adjust while on the water and I had more than enough foot room top to bottom.

Since that first ride, I have taken it out twice more. The last time was to a river that had almost no current in parts. This is when the Sylva really showed its stuff! This kayak moves beautifully and swiftly through flat water and glides forever! It felt very easy to propel and came up to cruising speed quickly. A couple of power boats went by me at low speeds (this is a no-wake river); the small waves from their motors came at me diagonally from behind and they were completely undetectable, the Sylva seemed to glide right *through* them as if they weren't there. But these were minimal wakes. By the end of this trip, I was no longer making small balance corrections while drifting and was becoming familiar with the feel of the boat around me. It felt very stable with no "tippiness."

It has front and rear hatches with rubber covers. I found the covers a little difficult to apply, but once on they were tight and appeared to be well-sealed against leakage. The cockpit is long and I had lots of room for easy-to-access storage inside it as well.

The finish on the hull is semi-glossy and very attractive (I got a compliment on the boat within 15 minutes into its maiden voyage). It is currently available in orange, yellow, and blue. I got the orange one for visibility. It came with a signed Manufacturers Statement of Origin with the serial number and date it was made along with other info, and also a warranty card; the Sylva is warranted against manufacturing defects for the life of the kayak (within the normal lifetime of a kayak). It also came with a neat little bilge sponge in the shape of the company logo.

I gave this kayak a rating of 9 out of 10 because there is no "10" kayak being made and I have no complaints about the Sylva. It's a sleek, attractive boat that is very well suited for flat water trips (someone else will have to review it for rougher water). I'm very pleased with it and I recommend considering the LiquidLogic Sylva when you are kayak shopping. 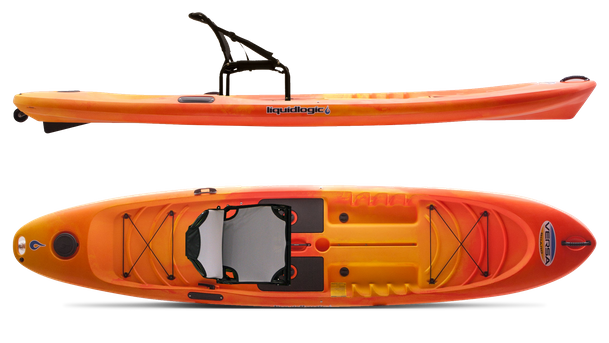 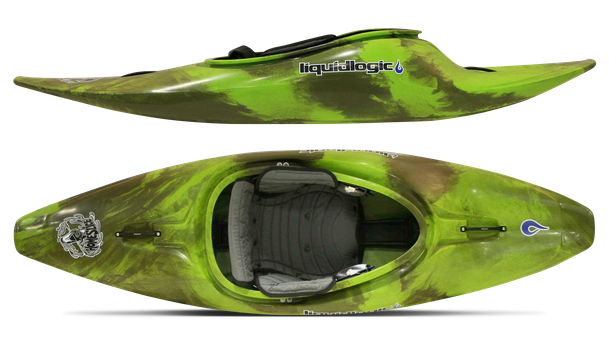