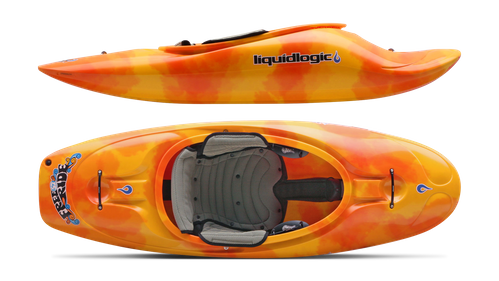 Read and submit reviews for the Freeride 67.

Read reviews for the Freeride 67 by Liquidlogic Kayaks as submitted by your fellow paddlers. All of the reviews are created and written by paddlers like you, so be sure to submit your own review and be part of the community!

Does what it says on the tin

Short, and heavy enough to be in the middle of the weight range, 17 years of downriver freestyle under the hull. The 67 works great, but did benefit from a custom 20mm booster under the badass. Loose hull, on par with a riot spin disc, nice edges that work when you want and warn you when you don't (but don't feel mushy of vague) plenty of carve, even on small waves. Pretty high volume ends, but they will sink, the stern either pivots, or screws up, not much in between. The bow sinks on the flats and stalls just fine, and linked ends are straight forward enough (if you are lighter then eddylines work great too) in a hole it will link better than most despite the stubby ends, plenty of pop at my weight too.
Ferry's, boofs and flares are just fine, it doesn't get pushed round too much, climbs on tops and boogies its way through, then carves a sweet turn into the eddy at the bottom.
All in all a really comfy downriver freestyle machine, I can wear rasslers and still get vert on the bow. if you are a thirtysomething who used to run everything in a disco and throw sic along the way this boat will wind the clock back, without demanding more than a weekend habit. It's tempting to compare it to a fun, but this boat actually is fun, it just does everything better than the other boats in the no mans land that is rivers runner freestyle. Stable and forgiving enough to get down, but tell it to get down and it will and hold its own with "real" freestyle boats (till they start linking combos) it's not a dud that can't run and is too fat to play, it just does what it says on the tin. Five star boat.

the boat is great ! I couldn't be happier with the purchase, shipped quickly delivered in perfect shape. Outfitting is great the free ride is the perfect complement to my stomper.

First of all, this boat Auto…

Submitted by: paddler234972 on 4/29/2013
First of all, this boat Auto Surfs. It is a total wave slicing machine. You will find it really doesn't have much in the way of edges. Its a bit squirrely on eddy lines, but I got used to it in just a few hours. I'm 6'1" 200lb with long legs, and I paddle it w/o footblocks because they don't fit, and the fit and comfort is good like this.
Freeride 67
by Liquidlogic Kayaks
Submit Your Review