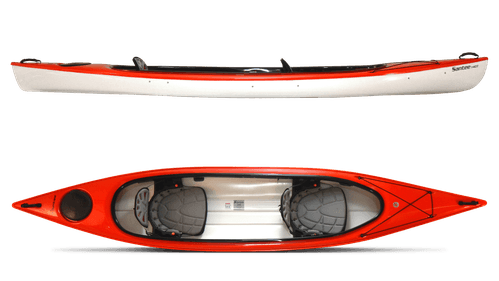 So you want a tandem kayak, which means you want an extra seat to share the experience, but you'd rather not paddle a polyethylene barge. That’s why Hurricane designed the Santee 140T ― a tandem kayak with a solo soul and lightweight attitude. It cuts through the water with stability and performance, and, with unique Trylon construction, it weighs in at a svelte 57 pounds, which means you won’t need a winch and pulleys to get it off your racks. There's also a roomy hatch and some added cockpit space for your day-tripping gear. You can even adjust the front seat for solo paddling on those days when you have no choice but to travel alone.

Read and submit reviews for the Santee 140 Tandem.

Read reviews for the Santee 140 Tandem by Hurricane Kayaks as submitted by your fellow paddlers. All of the reviews are created and written by paddlers like you, so be sure to submit your own review and be part of the community!

Love this boat. Was using a…

Submitted by: guest-paddler on 1/20/2014
Love this boat. Was using a single 140 sit on, bought the 140t as I was doing a trip down the darling river (Australia Centre). Put the 140t on top of my pop top motor camper, can do this on my own and the roof pops up with the yak still on top with the struts holding it up all night (I do support it with a pole incase). I traveled 4,000 km with 1,000 being dirt roads, we had no issues at all. Pad dwelling is easy single or with the wife and our Australian cattle dog/kelpie (she loves the yak. Don't use the single any more as this is easier for fishing in the river and bays and can take mans best friend with me. Recommend this boat to anybody, stable light and roomy. Yet to put a trolling motor on it but will do so.
5

We wanted a tandem kayak that…

Submitted by: paddler235153 on 7/24/2013
We wanted a tandem kayak that was light and fast that we could Paddle together and use with the Grandkids. Thus the 140t. Light- can lift on top of our SUV. Fast- composite material and I can slide the seat back to single hand. Beautiful - many comments.
High praise for this boat.
5

Submitted by: paddler232962 on 12/5/2008
I found a used 2005 Santee Tandem ($380) that was in great shape. My first reaction was WOW, what a beautiful kayak. Even after three years of being stored on a community outdoor rack, the finish was beautiful (was shaded by kayaks all around it).

I've used a couple singles in the past so my knowledge is limited, but for a couple, this boat is great. I can paddle alone from the back for hours without getting tired (wife likes to chill in front and weighs about 120), and the boat tracks straight and true. The boat is super stable, we never felt threatened in some large lake white-water that blew up in the afternoon.

I can lift the yak onto the roof racks by myself (I'm 52 and in pretty good shape) so single trips are very doable. The one and only drawback is that the foot-rests for the back seat are somewhat cramped. The seats are good but I may upgrade to the newer seats from Hurricane, they're supposed to be much better. All in all, a really great tandem kayak.

We have used our two…

Submitted by: paddler232528 on 4/10/2008
We have used our two Hurricane Santee 140T tandem kayaks heavily for over a year and are very pleased. These boats were purchased from Lancaster County Marine as family boats, but they are speedy performers on quiet water creeks, rivers and lakes, and quiet coastal waters. The hull is light, fast, family friendly (stable and with a larger cockpit). It tracks extremely well.

Before buying, we rented many different tandems including multiple models from Wilderness Systems, Necky, and Old Town, among others. While all seemed more rugged, none of them come close to the Santee 140T in speed on water and tracking. The cockpit is enormous. We have a tow rope, but have never needed it to get the kids to shore in time. The 140T’s have us arriving sooner than planned every time. It’s that easy to paddle.

Speed: You have got to experience it for yourself to believe it, but paddling with the “help” of a 7yr old girl, tandem loaded with an overstuffed 23lb deck bag, and a standing 85lb Chesapeake Bay Retriever (yes, standing)… we still easily speed across lakes fast and true, passing most other yaks of all shapes and sizes. For the cockpit size alone I was willing to trade off speed, but got greased lightning –a pleasant surprise. Runs upstream with ease of a narrower shorter boat.

Stability: Very stable. Late night fishing our 11yr old curled up sideways (!) to nap. I didn’t notice until I looked forward. As I said earlier, our 85lb dog can stand in it and as long as his paws are in the cockpit and not up on the side deck, we’re fine. If I have to grab his collar and settle this muscle dog down off the deck, the kayak is usually still coasting purposefully toward our horizon marker. Amazing tracking.

Transport: A Santee 140T weighs only 52lbs, wet. I can load two Santee 140T’s on a Toyota Sienna by myself faster than the inside of the van gets packed. Carrying to/from the water is so easy, my kayak dolly purchase was a waste of money. Gone are the days of dreading car-top loading. We run to the water on impulse now. Do not underestimate the benefit of a very light boat. We’re probably on the water nearly twice as often because the 140T’s are so easy to transport.

Flotation: Covered bulkhead in stern with plenty of flotation. We stuff it with an inflated drysack for rougher water in case the hatch cover comes off. (It never has.) Closed cell foam insert in bow is adequate. Capsize practice shows that front floatation works but for this coming season I’m gluing two small bricks of closed cell foam on either side of the under-deck bow foam for a bit more buoyancy.

Seats: Comfy, comfy, comfy. Old model seat backs didn’t always lock in position. New seats fold forward, can not slip, and besides all the usual adjustments, even allow for thigh angle to be adjusted so that support is spread over more of your legs. Neat design. Pay extra if you have to to get the new fold forward seats. If you can’t find a 140T with new seats, try Lancaster County Marine, because they know all about the design change.

Storage: Get four of those foam pool noodles and lay them alongside the edges of the hull on the floor. Works great. Wouldn’t advise storing on side. Might be okay, but hull is very light and has some flex.

Appearance: (for those who factor such things in). The Santee 140T turns heads, on the water and on the van. On a final glide to shore we sometimes hear “nice boat,” or “man, your boat looks sweet, what is it?” or some such remark.

Wear/Tear: Over a year of heavy use. Both kayaks still look almost new.

Cons: Stating the obvious, it’s not for whitewater. Too pretty, lightweight and cockpit not configured for it. We stick to quiet water... mostly. Rear seat should be able to slide forward. Design doesn’t seem to need it, but I still would like the option. Forward flotation needs a little boost (see Flotation). Not yet available as a wii simulation. ;-) Get out and play!

Hints: Put some stow weight forward if the front seat passenger is a small child (true with most tandems).