Read and submit reviews for the Explorer Deluxe A-Sym.

Read reviews for the Explorer Deluxe A-Sym by Hennessy Hammock as submitted by your fellow paddlers. All of the reviews are created and written by paddlers like you, so be sure to submit your own review and be part of the community!

I used a Hennessy Explorer…

Submitted by: Kevinthier on 9/12/2014
I used a Hennessy Explorer hammock on a trip to the boundary waters in northern Minnesota. The hammock is light weight to pack and carry on portages. The hammock is very comfortable to sleep in. The trip was the first week of August and reasonable warn, but I was comfort all night long. Easy to set up. Rain fly kept me dry in the few showers that we had.
4

I've been using the Explorer…

Submitted by: paddler233931 on 5/2/2011
I've been using the Explorer for three years now. I've slept in it about 35-40 nights/year. When I first saw it, I thought that it would be uncomfortable. I expected the "butt-down" sleeping posture. But getting in a friend's for about a minute convinced me otherwise. If you angle your body diagonally, you find that you are almost flat -- no "butt-down" posture. That one minute was enough to convince me that I had to get one of these things.

So I got the Explorer Deluxe A-Sym model. The "Deluxe" just means that it is longer, and somewhat more "heavy duty", for somewhat taller, heavier folks like me (6'2" and 200#). The standard rainfly didn't look like it would keep me adequately dry in the rain (though I couldn't find anybody who complained about that). Since I never backpack -- and didn't mind some extra weight -- I asked for the larger "Hex" fly, which they will substitute for no additional charge if you ask. They also sent a pair of SnakeSkins. As far as accessories, I bought the Overcover and the SuperShelter 4-Season Insulation System (consisting of an UnderCover and UnderPad).

This thing is not just a hammock -- it has built-in mosquito netting and a rain-fly -- so it is designed to completely replace a tent and a sleeping pad.

Setting up the basic hammock is easy (though of course easier after the first time). After a while, you get good at judging how far the trees need to be from each other in order for this to work out. The instructions were relatively clear, as I recall.

After tying the end lines to the two trees (using the two included nylon straps around the trees -- which protect the tree pretty well), all you need to do is to similarly tie the ends of the fly to the trees and stake down the side lines of the fly (and, optionally, the sidelines of the hammock).

Comfort in the hammock is absolutely exceptional. Last summer, when staying at our family cottage, I stayed in the hammock in the front yard instead of sleeping in a bed in the cottage -- for a month. It is that comfortable. Again, after arranging yourself slightly diagonally, you are almost flat. Extremely comfortable.

When I first started sleeping in the hammock, out of habit, I tried moving around at night. I'd start out on my back, then move to my side. Then the other side, even tried my front. Nothing was very comfortable except the back. Thinking about it, the reason that we all move around like that at night on conventional beds is because conventional beds have pressure points (i.e., uneven support on our bodies concentrates pressure in a small area of our bodies). But the hammock supports the full body equally -- no pressure points. So I tried just sleeping on my back and not moving around -- and it was great! No need to switch positions at night! I also used a pillow at first. But I found it just got in the way. Trying it without a pillow, I found the pillow was wholly unnecessary -- your head is well supported by the hammock.

Downsides of using the hammock:
- Your backside gets cool (particularly your upper back and your butt). In a tent, you always use a ground pad to insulate you from the cool ground. But there's no such beast here. Even with a sleeping bag, since it compresses under your weight, there is just a fraction of an inch of compressed (and therefore ineffective) insulation underneath you -- so COLD air is blowing past you a fraction of an inch from your body. This tends to make the upper back and butt somewhat cool. More on what to do about that later.
- If it is really hot, you can sleep with your skin against the bottom fabric. The above described coolness (i.e., wind blowing past you underneath the hammock) can keep you nice and cool at night in hot conditions. Unfortunately, the downside to this plan is that mosquitoes are fully capable of penetrating the fabric. So it pays to have something like a sleeping bag underneath you. They addressed this issue with their new "Deep Jungle A-SYM ZIP Hammock" by having a double layer of fabric. I haven't tested that model, though.

COLD WEATHER USE
For cold weather use, I bought the OverCover. This is a very thin nylon thing that covers the top of the hammock (the mosquito netting part). It is for use in dry winter conditions. The idea here is that it acts as a windbreaker -- so that you don't have COLD air blowing across your top half through the mosquito netting. There is a small breather hole near where your head is.

I also bought the SuperShelter, consisting of the UnderCover and the UnderPad. The UnderCover is basically a thin nylon layer that is slung snugly underneath the hammock. This could be used when it is hot and your bare body is sleeping against the fabric (i.e., to protect you from mosquitoes getting you through the fabric), though I haven't used it that way. It is designed so that you could pack some sort of insulation between the underpad (which again is slung snugly underneath the hammock) and the hammock. This can be your parka, or your dirty clothes, or your clean clothes, or some dry leaves or whatever. Another option is their open cell foam UnderPad, which fits in there well.

I've used this system (with the OverCover, the UnderCover, and the UnderPad) in conditions as low as 16 degrees F and been comfortable. However, keep in mind that I had a zero degree sleeping bag AND was bundled up quite a bit inside the bag, while wearing gloves, two balaclavas, down booties, wool sweater, fleece long underwear, etc.). BUT I proved that it was possible to be comfortable in this hammock in sub-zero conditions.

There are also some other alternatives for cold-weather comfort here. A company called "Jacks 'R' Better" makes a down thing designed for this hammock that slings snugly underneath it (i.e., replacing the UnderCover and the UnderPad). I haven't tried it and don't know anybody who has. It is kind of pricey, as you might imagine. But if you are intent on using this thing in arctic conditions, it may be worth it.

They also sent a pair of SnakeSkins gratis. These are two sleeves of nylon. It makes it extremely simple to "fold up" your hammock. These sleeves are left on the end lines when the hammock is set up. When you are ready to take your hammock down, you just pull the sleeves towards the middle and tuck the hammock material into them. You now have a long, thin, snake-like thing tied to the trees. Untie the end lines from the trees and fold up the snake -- easy, convenient, and tidy. Unfortunately, the SnakeSkins only work when you don't also have the optional OverCover or UnderCover installed. The rain fly also doesn't fit in there (though the standard one might, I suppose).

The big Hex rain fly has always kept me completely dry even in the biggest downpours.

Where do you keep your stuff? Well, underneath the hammock is a big open-air vestibule for storing your pack. This keeps it dry and accessible. When I get into the hammock at night, I bring tomorrow's clean underwear and clothing -- and sling it over the taught line above me -- kind of pushing it towards the two extremes (the head and the foot) to get it out of the way. Then, I typically get dressed in the hammock in the morning.

Overall, you should be able to tell that I'm quite sold on the spectacular comfort of this hammock. The only issues are ensuring that you can find trees or something to sling it between and ensuring that your underside is adequately warm.

How can it be improved? Don't know. Why didn't I give it a 10? Well, it is difficult to consider ANYTHING "perfect", so "9" is pretty much the highest rating that I can justify giving something. 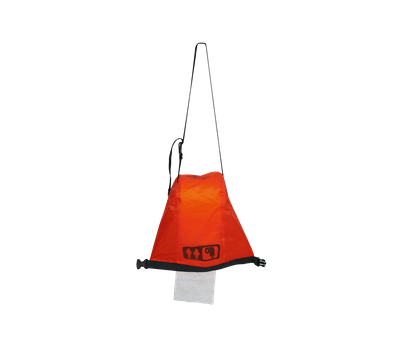