Read and submit reviews for the Phoenix.

Read reviews for the Phoenix by Eddyline Kayaks as submitted by your fellow paddlers. All of the reviews are created and written by paddlers like you, so be sure to submit your own review and be part of the community!

**Take into consideration that this is my first kayak, and only the second one I've paddled in frequently. **

It is fairly comfortable for a few hours or more on the water. Very Stable and easy to enter--even for a novice like me and my wife--. It has a nice storage compartment in the back and plenty of room in front of your feet for a bag or life vest if you're not wearing it. Beware the back compartment has a nice rubber lid that fits snug but the area is open to water so I suggest using a dry bag for anything you don't want wet. Another nice feature of this over the similarly priced Pleican one is the adjustable foot rests.

One major con to it is how long it is. It could be difficult for someone smaller then me --im about 5'10" and certainly not a body builder. -- to lift it on top of a SUV or similar height vehicle. It only weighs about 45 pounds but its length makes it somewhat awkward to lift onto a roof rack.(I'm using J cradles on top of a jeep compass)

It is made from plastic that is 1/4 inch thick maybe more, I didn't measure. And is fairly priced for beginners. I got mine on sale at Walmart and it came with a decent paddle(I think just Walmart is combining it with the paddle). I think this model may be discontinued by Sun Dolphin though. I could not find it on their site and the closest one too it was the Aruba model--no comment about the Aruba model considering I've never used it.

Overall I really like the kayak and would recommend it to anyone looking to buy one. But it is on the cheaper end of the spectrum. It is nice to your wallet but I could see it not taking as much abuse as something made from a better more expensive material.

The Phoenix by Eddyline is a…

Submitted by: guest-paddler on 11/19/2010
The Phoenix by Eddyline is a very capable kayak in many respects. At 55 pounds it is light for its 17 foot length because it is made out of Carbonlite 2000, the proprietary co-extruded plastic laminate of the manufacturer. The Phoenix has been described as a "station wagon" among kayaks because it is so capacious. I took it on a camping expedition to an island off the Massachusetts coast, and its compartments with watertight bulkheads held everything but the kitchen sink--camp stove, sleeping bag, tent, drybags--you name it. It is very stable--both primary and secondary--and is quite fast. Its hull design, however, lacks the hydrodynamics of its cousin, the Night Hawk, so it is a little slower than a seventeen foot kayak with a more tapered stern. Another drawback is that the Phoenix weathercocks in even moderate winds. Even when the skeg is deployed, it requires some correcting strokes to keep it on course. All in all, though, the Phoenix is solid for open crossings and certainly for expedition kayaking. It provides a dry and comfortable ride even in choppy conditions. It's too bad that the Phoenix was discontinued because it filled a niche for larger paddlers or those looking to carry more gear in a stable seaworthy kayak.
5

Eddyline is a great small…

Submitted by: guest-paddler on 7/14/2008
Eddyline is a great small kayak business. I bought my Phoenix in June 08 after being impressed with the Eddyline touring boats on a test paddle. The Phoenix has been discontinued for 2008, so I got a deal on a left-over 08 model. It replaces my Zoar Sport, now my back-up boat.

Shortly after the purchase, I emailed Eddyline with a question about the drop down skeg. Designer/owner Tom Derrer personally responded. This really impressed me.

Initial stability can be a bit intimidating for a first-time paddler but after paddling for 8 years, I really appreciate the medium initial stability and high secondary stability. I can really lean the boat when making a turn. And it turns on a dime. The long bow keeps me dry on choppy seas. It will weather-cock but as the other reviewer stated, it's easily countered by paddle stroke, edging and/or skeg deployment. The Carbonlite material makes the boat extremely light and is very attractive. I've added a permanently mounted deck compass. The fore and aft bulkhead compartments can hold a lot of gear. The boat is fast, with a max speed of 6.5 MPH on GPS.

Last week I had the misfortune of dropping the boat stern first when I was loading the boat on my truck. It caused cracking aft of the stern on the boat's bottom. I am pleased to learn that Carbonlite is easily repairable and I should have my boat back in 2 days or less from my dealer. Eddyline sells a do-it-yourself kit but with the boat being new, I wanted it professionally done to preserve the new "look."

I do not hesitate to recommend both the Phoenix and other boats in the Eddyline line. My next boat may very well be the Fathom in Pearl Blue.

This is a comfortable,…

Submitted by: guest-paddler on 9/20/2004
This is a comfortable, forgiving, and reasonably fast kayak. I have had it out in 25 mph wind and 2-1/2 foot wind chop and found it to behave predictably and deliver a dry ride. A review in Canoe and Kayak magazine panned the Phoenix for "pronounced" weather cocking, but I have found it to be easily controllable by adjusting the skeg and maybe edging a bit now and then. The thigh braces are contoured in a way that fits me really well, and the ample deck height accommodates my long-legged 6'2" frame. The Phoenix edges easily and confidently, and spins a good turn with the skeg up--even turns OK with the skeg down. Initial and secondary stability are both strong. The Carbonlite material is extremely strong--on my first paddle, I unexpectedly encountered a rock that ripped about 5 feet down the hull--expecting the worst, I found a only a minor scratch. The only negative I have about the boat is that I sometimes find water in the rear hatch. Nothing alarming, but would be better if there were none. I haven't found the source yet, and need to do some experiments and maybe talk to Eddyline. All in all, a great kayak.
Phoenix
by Eddyline Kayaks
Submit Your Review 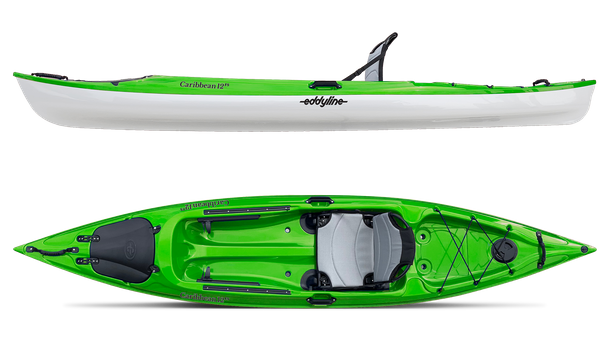 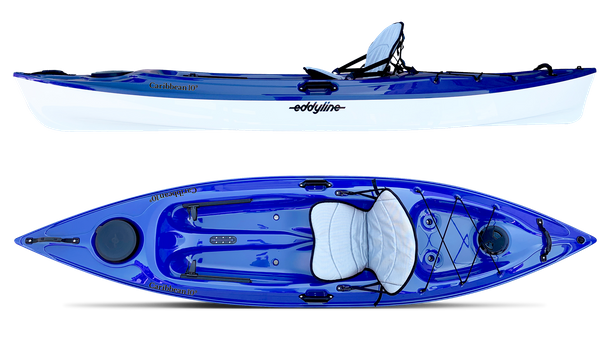