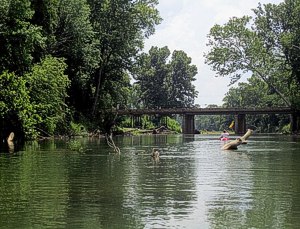 We did this run on a warm, dry day in May after several days without rain. A good bit of the first part of the river is inches deep and there was some portage involved. Also cursing. Expect a fair bit of grinding over shallow rocky bars in the middle of the river in places and if you have a fiberglass kayak, Im so sorry. For novice kayakers, there are parts of this river that run at class IV+ to Class V and this is not a river to paddle in high water or in specific stretches. Leave that to the pros and stick to the area between Piney River Road and the Piney River Campground and you really cant hurt yourself without effort.

Getting in the river without paying for portage is best done at the Old Piney River Bridge (put in location on google maps is below). If you don't want to spring for the $5, there is a parking spot (singular) sort of on the northwest corner of the bridge. There is a worn path down to the river, but your entry will suck as you pretty much have to jump in and slide the boats down.

In May of 2010, the middle Tennessee area was hit with catastrophic flooding and this river still shows the effects. Huge trees are down along the entirety of the river and there is a great deal of deadfall and some strainers. At the beginning of the run, you can see the wreckage of the old bridge which was destroyed by the floodwaters. The water gets very shallow in places once summer hits. Look ahead for the blue water to avoid getting high centered on a gravel bar.

The Piney River drops at about 8 feet a mile so there are some nice little rapids you will have to contend with. Post-flood, there is a ton of debris you have to avoid and in higher water, this could be challenging and easily a class III run. Most of this is in the class II category which is easy enough, but for the novice, you may find yourself tipped over multiple times. Fortunately, unless you knock yourself senseless, you wont drown because these rapids arent more than a foot deep in most places.

This river is lovely, but its also trashy. 99% of the people you will meet on the water are going to be beer-swilling rednecks with extended families carrying fishing gear, and smoking and drinking. Apparently, they simply heave their trash wherever they happen to be which is quite unfortunate. On the plus side, the old sewer plant no longer takes water in here.

On this run you will pass under three bridges. The first at Pinewood Road, the second at Highway 48 and the final one at the end which is Highway 230 where you have hopefully had the foresight to park your car or arrange for portage. Once you hit the Highway 48 bridge, you are roughly halfway done and the river gets wider and deeper, still punctuated by occasional rapids with steep turns and things you want to avoid.

You will know your run is at an end because you will see another bridge, but this one is packed with redneck kids. They like to jump off the bridge. This is Darwinism in action, but make sure you look up before you go under the bridge to get out on the left side. There are dumb kids up there and they might not realize you are coming underneath. No sense dying with them.

You will want to exit here as we are told the debris from the 2010 floods has made much of the rest of the trip to Vernon Bridge (2+ more miles down the river) largely impassable.

There is one outfitter here (pinewoodcanoecamp.com) but otherwise, bring what you need.

Nunnelly TN is not much in the way of amenities and your closet food and gas is 10 miles back to the interstate which has a McDonalds and a gas station. Cell service is sketchy along the drive, but there is a signal at the take out.

See pins on Google maps below for put in and take out:

Nothing helpful, but I posted a blog with more details and pics here: