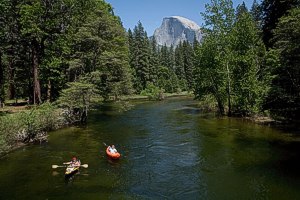 The portion of the Merced River described here is a meandering, quiet reach in a glaciated valley surrounded by vertical granite walls thousands of feet high. The most floatable months are April, May, and June due to the seasonal snowmelt from the surrounding Sierra Nevada. ("Snow-covered Mountains" in Spanish)

We're planning our float during the last week in April of 2015 in a borrowed 18' fiberglass Jensen-design canoe and have been reassured by Park Service e-mail that the reaches described here are Class I water - important since grandkids will be on board.

There are several scenic stone bridges spanning the River and many fine beaches scattered along its length as well, although the water stays cold even during the hottest summer days. 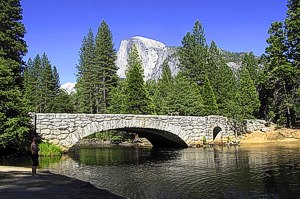 The reach from Sentinel Beach to Pohono Bridge was formerly closed to boating but is expected to open to private floaters in 2015 subject to a quota based on the limited parking. Let Park personnel know if you will rely on a "cell phone shuttle" that does not require spotted vehicles as they may "shoe-horn" such latecomers in during the peak season!

The River before and after the above-mentioned reaches are pretty technical, more suitable for kayaks and rafts.

There are lodges, cabins, and campgrounds inside Yosemite National Park, forest service and commercial campgrounds outside the park, and lodging in the nearby communities of Mariposa, Oakhurst, & Bass Lake - another paddling destination.