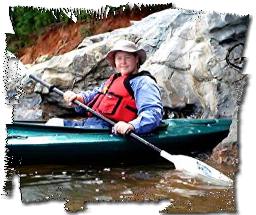 Lake Ouachita is a 40,000+ acre Corps of Engineer lake in the Ouachita (pronounced wash-i-tah) mountains north of Hot Springs, Arkansas. Average depth is in the hundreds of feet. The lake is known for its clarity and is popular for scuba diving. Unfortunately, its also popular with jet skis and water skiers. On the plus side, Lake O.'s rugged shoreline consists largely of National Forest land, which has kept most of the shoreline free of development. Former mountain ridges also form chains of islands in the flooded river valley. The islands are Corps of Engineer property and are open to free primitive camping - first come, first serve. The appeal of an island campout persuaded a recent paddling acquaintance and I to give the lake a try.

Hoping to catch a lull between the weekend partyers and folks celebrating the mid-week 4th of July holiday, we put in on Sunday, mid-morning, at the Buckville recreation area on the north side of the lake. We felt it was too good an omen to pass up when we found an island just off shore that was deserted. Camping on the far side from the launch cove, we could easily pretend we had searched for hours for such a great campsite. We set up camp then set off with lightened boats to explore the many coves along the shoreline and islands further out. 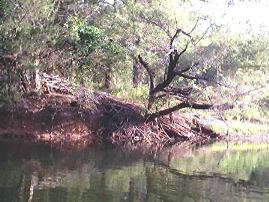 Our strategy paid off, by mid-Sunday, the noise of motorboats has begun to lessen significantly and by Sunday evening it was blissfully quiet, save a few premature 4th of July fireworks from the campers on another island. We spent Sunday afternoon paddling from cove to cove, stopping frequently to swim, snorkel, snack, and check out the local flora - many wildflowers including Rose Mallow and Wood Sage.

We paddled an estimated 5 to 6 miles, taking our time, circumnavigating islands 28, 29, 30 and 31, as the navigational markers and charts indicated, each of which hosted a number of promising campsites of their own. A few were being used by party barge picnickers, but we found several deserted. Crossing the navigation lanes between the "mainland" and the islands was a bit intimidating but we had no problem from the motorized vessels who all slowed down significantly or altered course giving us friendly waves. We definitely felt more visible and more secure paddling side by side across these lanes than either of us would have felt crossing solo.

We definitely preferred paddling along the rocky shorelines, safely away from the boat lanes and up close with the incredible geology of the Ouachitas. There is in fact a marked geo-float trail on another section of the lake close to the dam and Lake Ouachita State Park. The Ouachita has many deposits of quartz, many colors of shale as well limestone making for strikingly colorful geometric patterns along the bluffs and shorelines. (A little over an hour south is the nation's only publicly owned diamond mine - Crater of Diamond State Park, and much closer are several dig your own crystal places.) 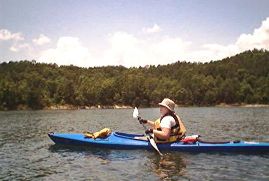 Looking down as you glided over shallow waters treated us to a beautiful mosaic of natural slate "tiles" sloping away into the great depths of the lake. Bass and sunfish could often be spotted swimming along in the shadow of our kayaks.

We made it back in time Sunday evening to enjoy our dinner at camp with a view of a beautiful sunset. We were just a few days ahead of the full moon and so we launched again after dinner for a gorgeous moonlit float down a short arm of the lake to the east of our island. The moonlight literally danced on the water.

The next morning we launched again shortly after dawn for an early morning paddle along the same arm we had explored by moonlight. Sunshine revealed new surprises including a beaver lodge where young kits could clearly be heard squalling for their momma who swam past us in the next cove. After breakfast and a swim in our own little island cove, we practiced assisted and paddlefloat rescues in our recreational kayaks, whose large cockpits make for cruising comfort but virtually eliminate the possibility of a roll as a rescue technique. 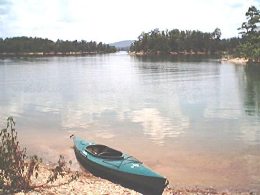 We took one last paddle along the shoreline west of our launch spot, before calling it a trip. Home to a campground and other development, we quickly received confirmation that we had chosen the right route the previous day.

It was a great trip and one I definitely look forward to repeating, from this launch point as well as trying out the countless others around the hundreds of miles of shoreline. If you go during the summer, you need to go during the week, which will greatly reduce the number of motorized vessels. Fall in these mixed pine/hardwood timbered mountains is spectacular in late October, early November and the jet skiers and water skiers will be tucked away for winter. Early spring would also be an excellent time for a weekend trip.

There is a parking area and launch ramp at the Buckville Recreation area and an adjacent campground. The islands are totally primitive.

A number of lake maps are available. The Corps of Engineers publishes a free one that is not greatly detailed by servicable. More detailed ones are available from local marinas, bait shops, outdoor stores.