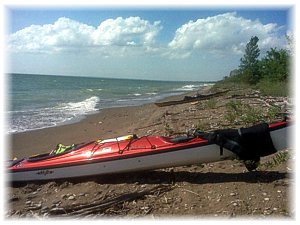 We all go on day paddles; the major difference with this day paddle trip report is that we started in America and ended up in Canada! I was able to check another trip from my life list by crossing Lake Erie from Ohio to Ontario. My paddling group tried this trip a few years ago, but got stuck by weather on the north side of Pelee Island. In planning this trip one of our goals was to make the crossing in one day. Depending on where you land, this is a 30 plus mile trip with several long open water crossings.

Randomly picking a date on the calendar we lucked out with favorable winds and decent weather over the weekend of July 24-25, 2010. Wind reports were accurate and we were lucky to get a push from south and southwest winds. Reports also called for some scattered thundershowers, but we didn't experience any rain on the water. After dropping a car at the Mazurik launch, near Lakeside, OH we shuttled to our launch point at the small beach near the Miller Ferry. We left the beach on the tip of Catawba Island at 6:30 a.m. and 32 miles and 9 hrs and 14 minutes later we landed at Point Pelee, Ontario.

We made good time as we left Catawba, South and Middle Bass Islands in the dust. It wasn't long before we crossed into international waters. With a good southern wind push, we made it to Fish Point (southern tip) of Pelee Island in 3 hrs 29 min. It was interesting to find a break mid way on the famously long sandbar tail pointing south. We scooted through the break and into the protection of Fish Point. We took a lunch stop at the old, now abandoned Dick's Marina. We tried to check in with customs, but the phone was gone and everything was overgrown and locked up. We refueled and quickly got back on the water. There are a few cottages on the southern shore and we chose to head up the eastern shore of the island so we wouldn�t get beamed for the better part of nine miles as we headed for Lighthouse Point.

Cottages, beaches and nature areas dotted the eastern shore and we made it past middle point to the northernmost tip of the island at the light house in 6 hrs 20 min from when we started (that is one long island). We stretched our legs in the shadow of the Pelee Island light. Abandoned in 1909, the Pelee Island light was left to the elements for nearly 100 years. The Relight the Lighthouse Committee spent 10 years fundraising and navigating political red tape until they got word that an application for a Canadian Federal Grant was approved and would provide additional money to restore the tower. If you visit the island it is worth the hike or paddle to see the light. 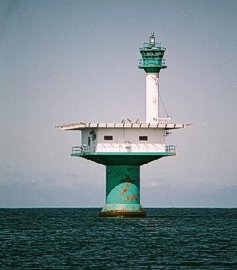 Looking northeast, it was a bit disconcerting that we couldn't see the Ontario mainland approx 10 miles away because of the summer haze. Looking at our charts we knew what heading to take and our compasses hadn't failed us yet! We could see the unique and interesting Pelee Passage light which sits in the middle of the lake, marking the northern shipping channel. There has been a light at this location since 1861. The light is shaped like a toadstool with a large helicopter pad on top. On the water we passed the light to the northwest, but were close enough to get a good look at the light.

The crossing was fun and interesting with a mix of confused seas, breaking waves, and the occasional 6 footer. Surfing was on the agenda and we caught wave after wave as we sped to Point Pelee. We landed a few hours later with a thud on the crashing surf on the beach. We did not land at the very tip, because of the waves crashing into the break walls. We chose to land further up the point to the north on what appeared to be sandy stretch of shore. The rip currents were pretty strong at the beach and once I landed my boat was sucked backward and sideways. After getting pounded by a few series of waves we pulled our gear further up the beach and bailed out our cockpits.

Before our trip, we had contacted Pelee Wings, an outfitter and nature store near the park. Michael the owner was expecting us and luckily we had a cell reception to call for a shuttle. If not, we�d have another 6 miles of paddling to reach Pelee Wings. We learned that the park service limits travel to the point and doesn�t usually allow private vehicles near the tip. Michael sweet talked the rangers into letting him down the access road to pick us up. We had to bushwhack through some old bird watching trails to find the road and ultimately haul our gear through the bush to Michael�s car. We can�t thank Michael and Pelee Wings enough because he let us camp at the store, use his hose to clean up and use the facilities in his store. We had a nice meal and a few cold brews at the restaurant a short walk from the store. We turned into instant celebrities when the servers found out we were visiting via kayak. Several commented on our weird accents. Pelee Wings is a full service paddling and bird watching store and is worth the stop if you�re in the Lemington area.

Back at camp, it rained all night, but it didn't matter, we both crashed in our tents after a long day, food and beer. We heard that they had issued Tornado warnings that morning on the Canadian side. We wondered why we didn't see a single boat all day long? We had hoped to see some freighters in the northern shipping channel, but we didn't see a single one. Maybe there was a "large craft" advisory? 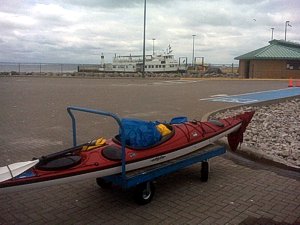 We probably could have paddled back, but chose to try the ferry system. We were loaded and in Lemington for the 10 a.m. ferry. The MVJiiman is a huge ship/ferry. A semi truck and trailer was already loaded in her belly when we rolled our kayaks and gear onto the boat. Passage for two paddlers, gear and boats was $15. We had breakfast in the ship cafeteria and enjoyed the ride. In contrast we saw 6 huge lake freighters on Sunday. We got to Pelee Island around 11:30 a.m., unloaded and bought our tickets for the 1 p.m. Pelee Islander Ferry to Sandusky. Passage with gear and boats from Pelee Island to Sandusky cost $28.

The Pelee Islander ride was longer and we spent a few hours cruising to Sandusky Ohio. We passed really close to Middle Island, where the commorants have pretty much destroyed the island. The Ferry also passed by Kelly�s Island and Cedar Point before landing in downtown Sandusky around 4 p.m.

Our dilemma was that our shuttle car was near Lakeside at the Mazurik access and we had about a 10 mile paddle ahead of us. If we would have planned better, we would have staged a car in Sandusky. We also had to carry our gear 18 blocks to find a public launch - yikes! We ended up flagging down a Good Samaritan pick-up truck and he hauled our kayaks to the public launch. I kicked him a few bucks for helping. It took us about 2.5 hours to paddle from downtown Sandusky, across Sandusky Bay, around Marblehead and past Lakeside before reaching our take out.

A couple of notes:
We didn't check in with customs until reaching Pelee Wings, which was 4-5 hours after crossing the border and the customs agent wasn�t particularly happy. We thought you had to call from a land line, but I checked at the Island customs office on our return trip and you can dial 1-888-CANPASS on your cell to report your arrival. When we found that Dick�s was closed, our only alternative was to add a bunch of miles paddling to West Dock or Scudder�s on the north end, both prospects were not high on our list, especially in a kayak. The customs agent didn't understand the geography, kayaking or adding mileage. Upon arrival at Point Pelee and you plan on commando camping, you are playing with fire, they patrol the point and beaches with ATV�s. Pelee Wings is great and Michael will bend over backwards to help. You can paddle right to his shop, but it will add a few miles and might be a better prospect if you do the trip in two days. The ferry ride was fun, but my next attempt will be to paddle over and back. Make sure you have your passport, it made going through customs really easy.

On Pelee Island, it looks like the park service has spent some bucks improving the park campground on the east side. There were brochures on the island showing the new restroom facilities and amenities. You can paddle to these sites, but you have to know which beach to take out. Going north there are two fairly long beach�s where you don't see houses. At the first long public beach you come to, you can see some of the park light poles through the trees to the west and you can see the sandy paths leading down to the beach. You would land and cross the street to get to the sites.

For this trip we camped in the side yard at Pelee Wings nature store and outfitter. Just reach out to Michael at www.peleewings.ca/ For the shuttle fee and a few extra $$ he let us camp at his store.

On this trip we had approx $42 in ferry fee's but this covered two ferry's, two passengers, gear and boats. You will need to work out the shuttle fee if needed with Pelee Wings.

Route 2 or the Ohio Turnpike can get you to Port Clinton, Sandusky or Catawba Island. These main highways run east/west across northern Ohio and there are many exits to get to the coast. We launched at the small beach to the east of the Miller Ferry Launch. You access the Mazuirk Launch from route 163 and follow the signs.