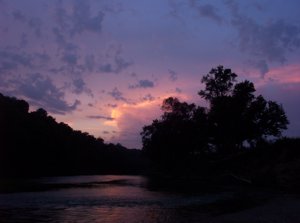 Nature of the River: Very slow moving stretch of this river with a gradient of only 1.4 ft per mile.

DAY ONE:
We put in under the Rt 230 bridge late on Saturday afternoon, around 5 PM. The sun was lower in the sky, but right in our faces. It was hot, but not insufferable as we paddled through lush farm and woodland. There were a few riffles, coupled with slow moving straight stretches. The bird life along this river is amazing, as we saw blue herons, kingfishers and hawks throughout the paddle. We found a large gravel bar on the east bank and set up camp for the evening. Anvil clouds we springing up north of us and we saw numerous lighting flashes as the sun set, but it never rained on us.

DAY TWO:
We were awakened around 7 AM by the sauna like heat in our tents. This was not a good sign. We, like many other areas of the country, have had an unusually hot summer, even by Middle Tennessee standards. I found out this day that it really can be too hot to be on the river, something I might have intellectually grasped, but didn't REALLY understand. Did I mention that it was hot? 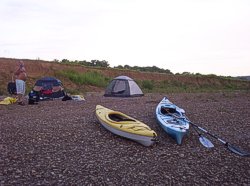 The Duck River normally gets into the mid to high 70s during July and August, but it has to be nearly 90 degrees now. A river that normally sports turtles lined up in neat rows on every log and rock had none. Maybe this was due to the fact that it was hot, very hot. We did see several as they surfaced to breath and dropped immediately back to the bottom. Maybe the mud had a cooling effect of them.

The birds and insects were plentiful, but little else stirred, as it was hot. Stoke after stroke, the river crept hotly by, stroke by stroke, we knew we had to be closer to the sweltering take out. Stroke, stroke, heat stroke, we had to stop every 30 minutes to jump in the river and let the lukewarm, spa like water cool our cores by a degree or two.

I love the rivers, and can't think of a single place I'd rather be than in my kayak taking in the natural beauty of the river's course. After surviving the last 4 hours and 14 miles of this trip, I'll listen to the weatherman a little more closely when he says, "A high of around 100 degrees, with humidity at 77 percent."

Maybe I'll take in a movie, go to Bass Pro or Dick�s to look at what's new in the outdoor products world. Anywhere the AC is cranked up so you can hang meat, no, never, ever, ever to a river that�s temperature is 4 degrees below the ambient air temperature� I am off next weekend, maybe it will be cooler, maybe I can find someone with A/C...

Not much of anything