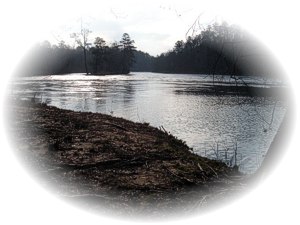 On March 9, 2013, my brother-in-law and I took a two day / one night trip on the Cahaba. He used a sit-on-top kayak and I took a sit-in model. Our wives dropped us off at the Old Slab near Marvel. They picked us up the next afternoon at the Cahaba Wildlife Refuge off of Bibb County Road 24. This trip was about 13.5 miles.

I had planned this trip for about three weeks and had been waiting for optimal weather and water conditions. It has been tough lately due to the really cold weather and the abundance of rain. Each weekend it seemed that we would either have cold weather, rain, a swollen river, or a combination of these. Finally, on the ninth everything came together perfectly. We had temperatures in the high sixties during the day with nighttime lows in the forties. The weather during the day was really nice and comfortable. The water levels had dropped to a good range that was neither frightening nor aggravatingly low. The gauge at Centerville read about 1500 cfs. Really the only downside was that the water temperature was about forty-nine degrees. This made it critical to dress appropriately in case of immersion in the river. As it turns out neither of us got very wet, other than splashes and our feet.

Neither of us had been on this stretch of river before, so we didn't really know what to expect, but it turned out to be nearly perfect. After launching at the old slab, we basically just floated with the river, never really having to paddle very much except at the shoals. 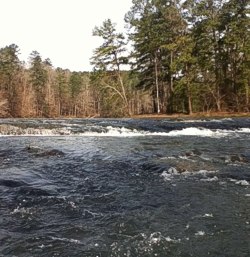 Almost all of the sections of shoals we would try to pick a good line and paddle hard through them to avoid getting stuck. Sometimes we would get stuck a little and have to push off with the paddle or shimmy the kayak to get it going again. Our biggest fear in any of this was the water temperature. We were worried that if we got pinned on a rock and turned sideways by the flow, that we could overturn and then have to deal with warming back up after a cold dunking. It turned out that there are really only two places that this would potentially be an issue, and they were to come on the second day.

Around four o'clock it was beginning to get dusky down in the creek valley and so we decided that we needed to find a place to camp. So far the river banks had not looked all that great. It was about this time that we began hearing gunshots up ahead and then began seeing the water erupt about a hundred yards in front of us. It seems that someone thought the river would be a good place for target practice. Needless to say, we were not feeling very good about that. Finally I remembered that I have one of those really loud whistles in my PFD pocket and blew one long blast on it. I guess it worked, as they stopped shooting and waited on us to arrive. Luckily, they were nice folks. We chatted briefly and moved on. Through one more shoal and around a bend we found our campsite.

Let me start by saying that I do feel kind of bad for camping here, as it was apparent that this was either someones property or that someone had really cleaned up some corporately owned land. Compared with everywhere else we had seen to camp, this place was awesome. It was on a point with spaced out pine trees, giving a nice bed of straw. It had a fire ring already set up. Best of all was the view of the river with shoals rippling both above and below us. We did leave the site in better shape than we found it. 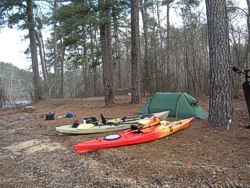 The next morning we packed up and headed back out. It was another beautiful day, with the only downside being the wind. Much of the way we had to battle a very strong headwind. It was tiring and aggravating at times, but the wind felt nice on a warm day. The shoals on the second day were typically much more intense than on the first day. There were two places that were actually a bit unnerving. One was right below our campsite. I actually did get my kayak pinned and turned sideways here and had to step out into the shoals to free the boat. The other was right at the end of the rockier shoals section. There are old, long abandoned, train trestle towers made of stone. Directly between them was a fairly rough section of water that was difficult to read from above. We actually got out and walked ahead to scout that section. After that last obstacle the river develops more of a slow, deep, leisurely pace all the way to the takeout.

Both the launch site and takeout site are quite easily accessible and good for that purpose. I would not, however, want to leave a vehicle at either of these places. It could be that nothing would happen to them, but they are both a bit sketchy.

The put-in and take-out are both freely accessible. There are no camping facilities, however there are many places along the river or islands therein in which you can camp provided you leave, are respectful of landowners, and leave no impact.

Directions are pretty intense and can vary greatly depending on where you are coming from. It is probably best to let your GPS or Google give you directions. Following are the coordinates of the put-in and take-out.

I used Google maps and the USGS website to monitor river flow rates.