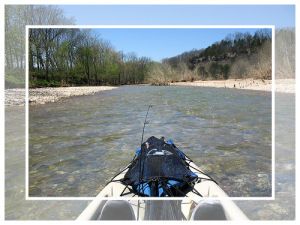 I took off at the intersection of Mikes Creek and Big Sugar Creek with the gauge at Powell reading 4.4 on Friday evening. I was going to spend 2 nights on the river so I could really enjoy the weekend. The water level was about perfect, I only scraped once or twice! I was expecting to run into many strainers left over from the flood before I got to Cyclone- Much to my surprise, I didn't have to portage one time other than a low water bridge. There was one strainer about an hour in with two trees crossing the river, but I just put my head down and paddled through the branches.

I fished for a few minutes, caught on smallie 8" and that was it for the night. This section of the river is beautiful since there is not as much private land as there is below cyclone. As I started to look for a place to camp (2hrs after I left), I came around a left turn and could hear the sound of a loud rapids! I could see they crossed the entire river and were getting louder as I approached. It was actually a rock garden, but the water was so high I didn't drag - What I didn't know was after about 100 yards of being in the waves it takes about a 2-3 foot drop and front half of my canoe was completely under water!!!! NOW THIS IS THE KIND OF EXCITEMENT I HAD BEEN WAITING FOR!!! I managed to run the rapids and continue on with my lookout for a camp site. I ended up camping on gravel bar about a mile upstream from Cyclone and called it a night (3 hours of floating and almost 7 miles covered). 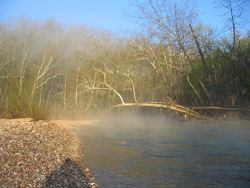 SATURDAY:
Woke up at 6am to a bunch of fog in the valley and tried some fishing (no luck) The weather was cold last night, but I could tell it would be a warm day. Broke camp at 10:30 and was going to have a casual slow float today so I was not in a hurry. The weather was so nice (felt like it was 80 or so) I decided to not fish and just enjoy the beauty of the river. I was at Cyclone in no time and spent 30 minutes talking to a local there who was real friendly. Soon after that I saw the first sign of other people downstream.

There were 2 portages on the section below Cyclone due to strainers that I didn't want to mess with being by myself. The stream seemed to get wider as I got closer to the Elk. There was one spot where the river splits, I decided to go right and about a 1/4 downstream it was a dead end! I had to walk all the way back upstream and take the left channel (oops). 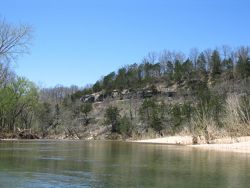 As the day went on, I realized I was going to finish my trip way early since the water was up and I wasn't fishing much. In my opinion, the last 3 miles were the trickiest of the trip (once you get past Sugar Island) there was about 2 miles of "S" turn after "S" turn that could be tricky for those less experienced - I thought it was a fun little stretch though!

The river really widens once you hit the Elk and I only had about 1 mile left. I couldn't believe how high the trees were stacked on the banks from the flooding. Going under the 71 bridge the water read at 4' on the gauge painted on the bridge support. I couldn't imagine the water at 18' a week earlier! I finished the trip at 4pm on Saturday. A whole day earlier than what I expected. (Today I floated 14 miles in 5 hours).

What a great stretch of river to float on a perfect weekend!! The only thing I wished were different is I could have floated 50 miles instead of 21. Next time, you can bet I will be on the hunt for smallies and hopefully that next time will not be too far in the future

71 South of Joplin to Pineville, MO