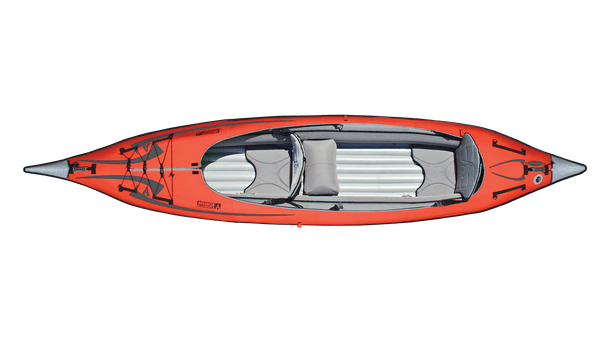 I purchased this boat 2 years ago. When I purchased it, it came with the drop-stitched floor. Overall, I like the boat. But, it has some blemishes.

The good: This is a nice boat. The boat looks great. Advanced Elements has, by far, the best looking inflatables I've seen in the market. They just look great, and half the time no one would have a clue you're on an inflatable until they get up close. When you're setting it up, you'll have a bunch of folks drop by to ask questions about it.

The build is rock solid. AE uses the same materials as rescue rafts/whitewater rafts in construction so they can take a bit of a beating.

With a 550lb capacity, you could definitely use this to packmule for a group of boaters. You could also use it for a fishing trip with a buddy.

You'd have to do something incredibly stupid to tip this guy over. I've literally laid my body off the side trying to make it tip, and it refuses to. You may as well be on a great big raft. If you want that stability, you'd be hard pressed to find something better.

The bad: I personally don't use this boat much because it takes awhile to set up. You're looking at 15-30 minutes of pumping to get it fully assembled. Sure, you can use an electric pump, but then expect annoyed looks from everyone around you as the pump screams over the quiet launch area. They also sell foot pumps, but I haven't had a chance to use one.

Same thing for teardown. While your buddies can wipe off their hard bodied kayaks, throw them on the roof, and go in about 5 minutes, you're going to be deflating for a good 15-30 minutes, then carefully folding, and stowing. Add in even more time to both setup and teardown if you add on a rudder.

I've also found that with the drop stitch floor, if everything isn't PERFECTLY centered and lined up prior to full inflation, you end up having tracking problems. This was surprisingly hard to do consistently. Constantly having to correct a big boat gets exhausting after awhile. Also regarding the build, the rubber skegs that are built in sit directly where the manufacturer tells you to fold the boat. They will develop creases from being folded over time. These will probably self correct if you leave it unfolded for awhile, but since mine mostly lives in the bag, they never get a chance. I think this contributes to tracking problems.

Because of constant corrections for tracking issues, I find myself always falling behind my other buddies on little their 10' kayaks. I ended up purchasing a rudder for it, but the rudder from AE only provides cables for one configuration, so you'll need to choose either tandem or solo and stick with it. You can purchase an extra set of cables, but those aren't actually sold by AE - they redirect you to a 3rd party seller (warning flag to me since it means they most likely won't provide support if there are issues).

It's a big boat for solo paddling (my wife doesn't like tandem boating). Because of this, I ended up purchasing a solid body boat that I can throw on the roof of my car for faster setup/teardown, and fewer tracking issues. For now, I am going to see about using this boat for fishing trips with a buddy of mine, since we won't be moving around too much. Then the tracking issues are less of an issue, and I'll have a second paddler to help correct.

Definitely give this guy a shot on the water before purchasing if you can. It's a great boat once you get used to it, but it can be tiring for longer trips, especially if you happen to misalign the dropstitch floor.