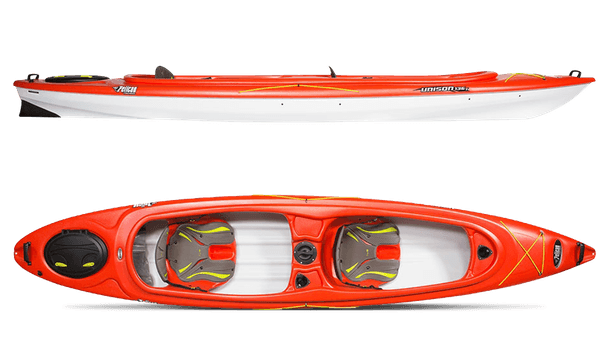 My fiancee was new to kayaking four years ago, so she wanted to start with a tandem first. We came across the Pelican Unison 136T at our local EMS store and quickly snagged it. It was a terrific buy; we have no regrets. This kayak is as stable as they come. It tracks well and for its size and weight, it scoots along pretty quickly, too. There is storage aplenty in the kayak, thanks to a very large rear storage hatch, a small waterproof storage well between the seats, and plenty of room both behind and in front of the rear seat. Same goes for in front of the front seat. I often put a cooler in front of the rear seat and can easily fit our fold-up kayak cart behind the rear seat. The cup holders are both good; not great, but better than most. Lastly, this is a pretty good looking kayak to boot. We've gotten plenty of compliments on its appearance, the large and wide cockpit, and all of the on-board features.