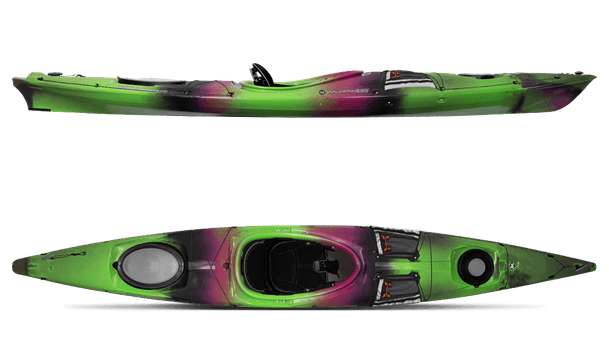 by Wilderness Systems
Details
I've had the Tsunami 145 for a few months now and couldn't be happier with it. I shopped all last winter to find a used one at a good value. I'd buy a second one in a second if one comes my way. Extremely stable, tracks great and I really never use the rudder except if I'm just playing with it. I have a back band kit I plan to swap for the seat back, just a preference really. You cannot go wrong with this boat.

by Rawson Boat, Inc.
Details
First let me say this review is based only on my opinion of seeing the boat and not actually paddling it, although I wish I had gotten to take it for a paddle.

The Rawson Tangent 16.10 is described as a "Recreational Kayak with a contemporary high performance hull", and in my opinion that's just what it is, a big, stable, play boat for the surf. At just over 16' long and 27" wide with a cockpit measuring 20" X 39" it's the bigger of their two HV boats suitable for larger paddlers like myself. With it's forward cockpit and raised stern I could just imagine paddling through waves and the quick turning abilities of this kayak which is just what it was designed for. The boat came with both skeg and rudder as well as two rear hatches. This kayak was a bit awkward when first picked up due to balance issues, but if you carry it the way he shows you it isn't hard to manage at all.

In my telephone conversation with Mr Rawson it was my understanding that the boat was taken to Florida for a photo shoot for the Rawson Boat Inc. website, and that was the extent of it's use. However when Mr. Rawson delivered the kayak to my home I found several areas of spider cracking in the hull including some very soft areas to the stern in the area below below the smaller hatch cover.

All in all the kayak was much more used then I was led to believe so for that reason I refused to accept the kayak and Mr. Rawson was kind enough to refund my payment, and that is the reason I never paddled the boat. I think the makeup of the kayak may be a bit thin causing a loss in the strength of the boat itself, a trade off I believe to get the weight at under 40 lbs. for such a big kayak. I think I would prefer a stronger boat that was a few pounds heavier over the boat I looked at. Also I think if I were to have one of these made for me I would want a front bulkhead and storage hatch as well as perimeter deck lines. I think both would be added safety features that would be a good addition to the kayak. On the other hand the base kayak (less rudder and/or skeg) is priced in the mid teens which is about half of most other fiberglass kayaks, but it's a case of you get what you pay for.

I really like the design idea of this boat and so for that I'm giving Rawson Boat a 9 but for build quality I'd have to say only a 7 at best.

by NuCanoe Inc
Details
I first heard about the NuCanoe just about two years ago and started researching them. After a couple of months I found a used 12' package deal at a decent price. My reason for buying a NuCanoe was that I became interested in recreational kayaking, and I thought the NuCanoe would be a way my wife and I might enjoy it together, as there was no chance she would get into a kayak solo as she doesn't swim.

I bought the boat in February and couldn't wait for nice weather and by late March was getting on the water myself. The boat felt very safe and stable not like I remembered of canoes in my younger years and I really enjoyed my days paddling before work. I paddled 3 or 4 times a week from May until September, I really enjoyed it.

The wife tried it a couple of times but it just wasn't for her, and so I continued paddling myself the rest of the season. Later in the season I was camping with a friend who had a Perception Prodigy 12 and I ended up buying one that weekend at an end of season discount. Being much easier to prepare, load onto car, and get into and out of the water, not to mention paddle, once I bought the Prodigy I didn't paddle the NuCanoe again that season. In the Spring I got a new truck and sold the NuCanoe to buy a tonneau cover and Yakima racks for the truck.

Now three years later and having much more experience paddling I wish I still had the NuCanoe as I'm sure I would start paddling it again and fishing from it as well. Recently I talked with a man who is looking to sell his 10' NuCanoe but we couldn't come to a fair price (he was asking same as new price). Plus I'm really in the market for another sit in kayak, a transitional kayak for improving my skills, rolling, and getting into other types of water then the quiet water I've been paddling. But if the right deal presented itself I would buy another NuCanoe for sure.

One more thing about NuCanoe, when I had mine, twice I had questions and emailed the company, and both times I got a reply from Blake Young the owner himself within a day, great customer service. 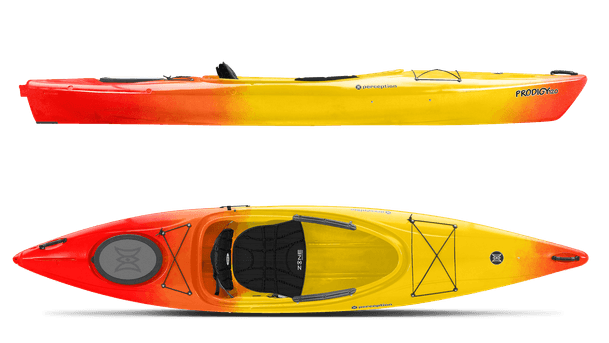 by Perception
Details
I bought my Perception Prodigy 12 new in September 2010 and so have paddled it for over two seasons and as an entry into kayaking think it's a great boat at a great price.

I have paddled on lakes and rivers and even some light surf kayaking in the Atlantic. It's got good stability and paddles nice for a recreational kayak. I have learned a lot with this boat but now think it's time to move into more of a transitional kayak that will give me the ability to enhance my paddling skills as well as move onto different types of water I'm not now paddling. But there is no doubt I'll keep my Prodigy as I know there will still be times where it will be the right boat for the days event, and I'll also have a boat to loan others if needed.