by Colden Canoe
Details
I have had a Colden DragonFly for a year now and its had several river and extended trips. It is a resurrection of the old Curtis DragonFly using the very same mold. Its intended use is downriver canoeing but does well on wilderness trips unless you need tables and chairs etc.

It's reputed to not be for the faint of heart and best for kneelers particularly when empty. It's deep and rounded hulled but at 14'6" not terribly fast though in the same speed category as other touring canoes with a L/W ratio of 7.

It's quite a narrow boat at 23 inches wide at the gunwales too (mine was the first Colden DragonFly and did not come out to be 24 inches at the gunwales). I believe the waterline width is 26 inches. It is a stiff hull that is well reinforced for river work. It's symmetric rocker means that it must be trimmed well in high stern winds in order not to broach. I had it out on a Chesuncook Lake/W Branch Penobscot River outing for five days with some stern winds at first and then bow winds with two foot seas. It was a remarkably dry ride.

Superb wilderness tripper for those with a good steering stroke to keep it going straight with exceptional maneuverability and secondary stability. Rock solid when heeled to the rail. 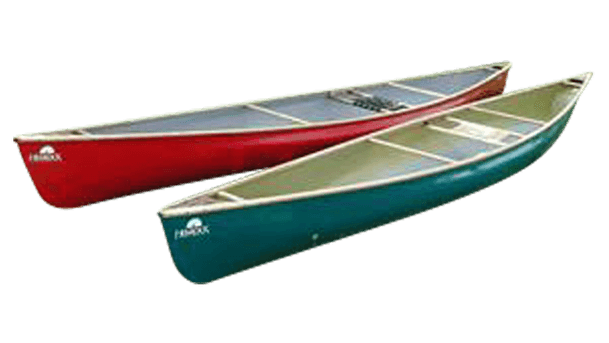 by Hemlock Canoe Works
Details
I have now had my Peregrine on a couple of extended trips. One was on large lakes in the Temagami region of Ontario (eight days) and another in Everglades National Park (eight days)

My Peregrine is a 2008 model in the expedition layup. I bought it for extended trips that might involve dropping the canoe by accident on sharp rock and lining for portage-less areas. I needed something tougher than a Kevlar only layup.

It is pleasant to be able to cruise at 4 mph effortlessly. Leaned to the rail, it turns almost in its own length. I used it on the Noble Hammock water trail in Florida which has a couple of hundred turns on itself in two miles.

A couple of complaints. The stern is sticky. When the boat started to swing off downwind on the Gulf of Mexico, it took some sharp stern draws to kick it back in line... Weighting forward helped but the paddle reach is therefore father. Peregrine could probably use some more stern rocker.

Mine is a two tone boat. The tape that delineates the white from the green came off with the first rub against a rock. Frankly I would rather dispense with the tape. However the delineation of white and green is far from straight and has a uncomfortable wave in it. I would not reorder a two tone color combo, but the white bottom does hide scratches.

Flipping the hull over reveals there is a small hog in the keelline. In theory that should affect performance but all it does is make me not worry about scratches in the boat. Its not a perfect boat so I will wilderness trip without worrying about ruining it.
I have the Ed's bucket seat. Its well worth the price. by Placid Boatworks
Details
I bought a RapidFire to replace a kayak and it is used mostly near land on the ocean and in tidal currents and races. I paddle it with the low seat (on the bottom) for stability in ocean rollers.

Pluses:
Fast, darn fast. No problem keeping up with my partners in seventeen foot sea kayaks.
Can exit from the boat onto anything. Its easier get out of the RF and climb dock ladders than it is from a sea kayak.
Rides over waves really well. The bow is quite light.
Maneuverable even with an abeam wind and sea. Can change direction in any sea.

Minuses: there is just one. The bow is so light without a load that the boat tends to pancake hard over the back of a three foot wave. I would advise always having a pack in the boat. This is after all a pack boat.

Spend a little extra and get the spray cover. It will keep you warm and cozy, which is about the only advantage I can find in a kayak.