Being Seen – The Reflective Kayaker

Lagging behind on a twilight paddle, I didn't notice whether my kayaking colleagues had continued down the shoreline or had cut into a narrow channel formed through the rocks at low tide. We were on an evening fall paddle; ambient light was minimal, limiting visibility to varying shapes and forms of blackness.

I switched on my headlamp and quickly swept the shoreline ahead of me -and then the far reaches of the channel. On the third sweep I spotted it, a brief wink of light back at me. - far down the rocky corridor to my right. Question answered - I swung my kayak around and caught back up to the group in a matter of minutes.

That "wink" was a piece of light bouncing off the reflective tape on the back of a friend's paddle. The darkness of the water, the rocks and blanketing night sky absorbed most of the light coming into that channel - including the limited reach of my flashlight. Fortunately, the two-inch-wide band of commercial strength reflecting tape grabbed enough light to send a flirt of light back in my direction. Such is the value and virtue of using reflective tape on you kayak and gear.

There are several types of reflective tape available. That which is sold at commercial marine supply stores seems to be the tougher and brighter of the lot available. Some of the four-inch square patches sold at kayak retail outlets often works well, too. Others tend to fray or wear away after a season. The tougher brands cost a bit more but are worth the expense. I put a strip of 2" highway sign reflecting tape on the back side of my paddle blades about 20 years ago and they are still reflecting as strongly as ever.

I first started using tape on my paddles, applying a strip diagonally across the back of each blade. That enabled me to place about 16 square inches of reflective material on each side of my boat - making me a seven-foot-wide "target" side to side.

To make sure you don't start peeling off the edges of the tape (which can be almost 1/16th thick), it helps to use a hard object to really press down the tape edge. I remember using a very sharp knife once to actually shave a bevel onto the entire edge of the tape once it was applied. Except for a few nicks and gouges, that tape is still at work on my paddle.

Another handy use of the tape is to mark both shafts on a two-piece paddle for easy re-matching. Using either a different color or different widths or numbers of bands can be the "code" that pairs a pile of halves to each other. There are several places upon your kayak hull and deck where reflective tape can be seen from several directions. The bow and stern are obvious locations for several reasons. It enables your boat to cast off a reflective glint from almost any angle - front, back and acutely from the side. A large craft sweeping the ocean may see the faint flicker from your prow or stern. A strip flanking your cockpit is not a bad idea, either. Several of the recreational kayak builders are now putting a reflective strip along the entire lateral midline of their boats. This is the same area as the extrusion line on a composite kayak. If you tend to keep your rudder saddled on your deck, add some tape along the blade on each side, too.

Manufacturers of PFD's finally started putting reflective tape onto the fronts, straps and backs of their life jackets several years ago as well. With the tapes and patches available today, any on-water piece of equipment can stand a patch of reflecting tape.

I have found that once the high quality tapes are applied, it takes a serious scraping or solvent to remove them, so make sure you want that shiny surface on your gear for the long haul. Be creative, too. Just 'cause that patch is a square doesn't mean you can't become creative with the scissors and make your own patterns. Sometimes by cutting creative curves and strips, you can expand the actual effective reflecting area at least twice beyond the initial solid square inch coverage.

Most reflective tapes are silver but you can get other colors as well. The most common ones are the safety or warning colors you see in industrial applications, namely white, red and yellow. Other colors may also be available. As long as they kick back that telltale bit of light, it doesn't matter what color you choose.

Another argument for bow/stern tape is the increased visibility factor when your boat is perched upon the roof of your vehicle. Clearly most will see the boat way closer than revealed by reflecting tape, but still, that extra glimmer of light, further out, just gives someone more time to realize what is protruding from your roof. 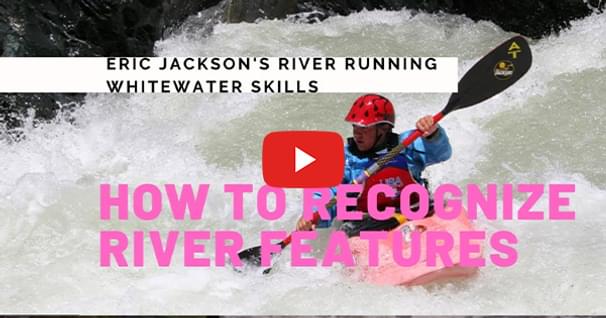 How to Recognize River Features

Reading a river is no different than reading a book -- you just need to have the correct vocabulary. In… How to Train for Kayaking