Deep in the heart of North America, surrounded by forest and field, there is an ocean.

A vast inland sea containing nearly a quarter of the world's fresh water — enough to flood the lower 48 states to a depth of almost ten feet — the Great Lakes contain upwards of 35,000 islands, and their 10,000 miles of shore rival that of the US ocean coastlines. 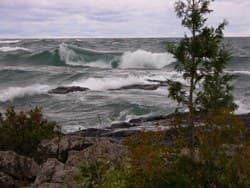 Those who may be tempted to dismiss them as "mere lakes" — mild tempered, serene, and unruffled Golden Ponds — surely have not yet enjoyed the sublime pleasures and occasional terror of venturing out on the Great Lakes in their kayak or canoe.

As on the world’s seas, large weather systems can sweep in to whip the water to a violent fury, especially on the western Great Lakes of Superior and Michigan. Like tropical storms and hurricanes, which derive their power from the moist sea air, storms originating on the hot, dry northern plains can rush out over the lakes and unwary paddlers, increasing their ferocity with every mile. Due to their sheer size, the Great Lakes become far more agitated and wild than smaller, nearby inland lakes. Aside from the oceans proper, the Great Lakes have more extended miles of open water then any lake, reservoir, and many ocean bays. When I visited the Battle Island light, the northernmost Great Lakes lighthouse, in Rossport, Ontario, the keeper there recounted how a 1977 winter storm sent three-story waves rolling past the tower, while spray and chunks of ice broke the glass out. "There's two hundred and fifty miles of fetch between here and Duluth," he said. "So when the waves got here … well, they were pretty big …"

Like much of the west coast, known for its mild climate conducive to growing everything from fruits and vegetables to hops for beermaking, much of the shore regions surrounding the Great Lakes are renowned, too, for their productive orchards, vineyards, and other crops which benefit from the longer growing season of a maritime climate. But the Great Lakes reserve their greatest climatic influence on surrounding lands for winter, with record lake-effect snowfalls. When cold winter winds sweep across the northern Great Plains and out over the warmer water of the Great Lakes, they are able to carry away vast amounts of water vapor, which later freezes and falls as heavy snow on the area. Houghton, MI, on the Keweenaw Peninsula, often is buried under 200-300" of Lake Superior snow each winter.

Like the world's oceans, the Great Lakes offer a water highway for vessels ranging in size from sea kayaks to thousand-foot-long bulk freighters. Hundreds of millions of net tons of cargo are moved on the Lakes each year, primarily grain and stone, as well as iron ore and coal used in the steel industry. These “Lakers” are capable of carrying the equivalent of 3,000 tractor-trailers, yet often must navigate through narrow and confined channels and locks, sometimes with only a few feet to spare on each side. There is something a bit incongruous about glancing up from your foredeck to see a cargo ship from Sweden sidle up to a dock in Milwaukee to unload wind turbine parts deep in the American heartland, nearly 2,000 miles from the nearest ocean, then take on a load of grain bound for Jordan or coal for South Korea. Combat ships built in Marinette, WI, make their first open-water cruises on Lake Michigan for acceptance trials before delivery to the US Navy. Great Lakes paddlers venturing onto open waters or making crossings to offshore islands are wise to keep an alert eye and ear open for these majestic freighters and other ships. 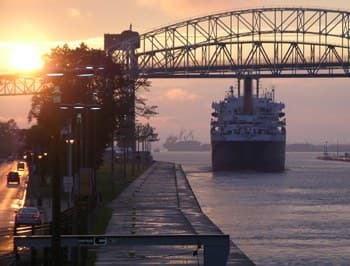 Of course, the same storms that threaten kayakers can plague even these large vessels, and the Great Lakes account for nearly a quarter of all US shipwrecks. The first ship to sail the Great Lakes, La Salle's Le Griffon, was almost inevitably the first to sink, presumed lost in a Lake Michigan storm while on her maiden voyage in 1679. But even as recently as 1975, modern ships like the famed SS Edmund Fitzgerald have been overwhelmed by conditions too great even for them, and nearly 8,000 ships have sunk and now sleep on the cold bottom of the Great Lakes.

To aid in navigating these often treacherous waters, the first inland lighthouse was built on Lake Erie in 1818, in Buffalo, NY, and was eventually followed by over 200 others throughout the Great Lakes. 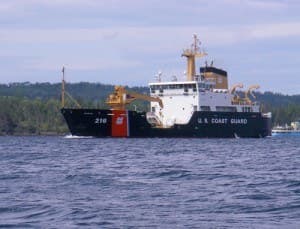 The doubtful may not consider the Great Lakes to be "real" oceans or seas, but don't tell that to the US Coast Guard, who, since the 1700's, has been responsible for safety and security on the 6,700 miles of America's "third coast" bordering the Great Lakes and Saint Lawrence Seaway. Based in Cleveland, OH, and maintaining sector stations throughout the region, the Ninth Coast Guard District operates vessels ranging from 45-foot patrol boats to 400-foot cutters and helicopters, performing everything from search-and-rescue operations to annual ice-breaking duties. Whether paddling your own kayak or piloting a thousand-foot Laker, when your day turns ugly on the Great Lakes, the US Coast Guard answers your call.

While the Great Lakes certainly share many traits with the world's saltwater seas, they are also quite different from them.

Only Lake Superior, the largest, boasts any sort of measurable lunar tide (less than two inches), but all the Great Lakes can experience seiches, a storm-surge-like oscillation of water caused by wind or atmospheric pressure variations. Most seiches are nearly imperceptible, but some can be quite large and sudden. In 1929, a seiche with 20-foot waves came ashore near Grand Haven, MI and swept ten beachgoers from the pier there. Eight fishermen were swept to their deaths in 1954 when a ten-foot surge came over the Chicago breakwater, and a 1995 seiche on Lake Superior raised and then lowered the water by over three feet, leaving small boats in Duluth’s harbor dangling from their mooring lines.

Though I've personally never witnessed such a seiche, I have seen storm-driven water levels rise by a couple of feet, threatening to snatch our kayaks from the beach. A ranger in the Apostle Islands National Lakeshore related how three kayak-campers were stranded on Outer Island when a mysterious rise in water levels claimed their unsecured boats one night, and savvy Great Lakes paddlers pull their kayaks far above the typical high-water mark and tie them to trees at night.

The very composition of freshwater lends it some distinctly different behaviors from seawater. Evaporate a cubic foot of seawater (about 64 pounds) and you'll be left with 2.2 pounds of salt, while fresh water yields none. Great Lakes water is simply less dense: ocean freighters actually sink about six inches upon entering the fresh water of the St. Lawrence Seaway. For paddlers, this lighter density creates slightly steeper, sharper waves more easily whipped up by the wind. Rather than the gently rolling swells typical on the ocean, Great Lakes waves tend to stack up into taller, short-period waves with steeper vertical faces and breaking crests.

Also of interest to kayak-campers is the fact that, unlike the ocean, the fresh water of the Great Lakes requires only a simple backpacking purifier in order to be consumed. So, paddlers are able to collect drinking and cooking water along their routes, rather than packing fresh water.

While the world's oceans see a wide range of surface water temperatures, mainly because they span from the polar regions to the middle latitudes, the variation within any given place is actually quite narrow. In the Atlantic, for example, the area of maximum temperature variation is in the equatorial region, where temperatures vary by as little as 12-15°F. Lake Superior, by contrast, varies by at least twice that amount throughout the year, from frozen solid ice to about 55°F, although I have personally swum in 70°F bathwater when August winds push warm surface water into confined, shallow bays. Beachgoers and paddlers enjoy the white-sugar sand beaches and Bahama-blue waters of Lake Michigan while, just a few hours away, kayak-campers share their northern Lake Superior island campsites with delicate alpine and arctic plants and wild caribou, normally found only in tundra regions. 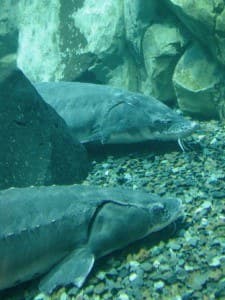 Due to their freshwater nature, the Great Lakes offer a unique marine environment. The Lakes are not inhabited by the extremely diverse variety of fish, marine mammals, crustaceans, and other life typically found in and around the sea. But in addition to the native lake trout, herring, whitefish, muskellunge, pike, bass, walleye, and perch, several species of Pacific, Atlantic, and Arctic coast salmon and trout have been introduced for sport fishing. Feathered residents include the bald eagle, Canada goose, loons, various ducks, mergansers, cormorants, pelicans, trumpeter swans, the ubiquitous seagull, and many others. If the Great Lakes are home to any sea monsters, it surely must be the ancient lake sturgeon. A veritable living fossil, little changed in 200 million years, this prehistoric creature can live to be a century old, and grow to over ten feet and 200 pounds.

Lake or Ocean? Ultimately, the question is perhaps irrelevant. For all their similarities and differences from oceans and inland lakes, some characteristics of the Great Lakes simply defy such classification.

In the end, a kayaker or other visitor may be wise to instead humbly accept the Great Lakes on their own terms: a singularly beautiful and utterly unique place we like to call the "Fresh Coast".